A lion and two tigers living in a private zoo in Lebanon are on their way to an animal sanctuary in France. 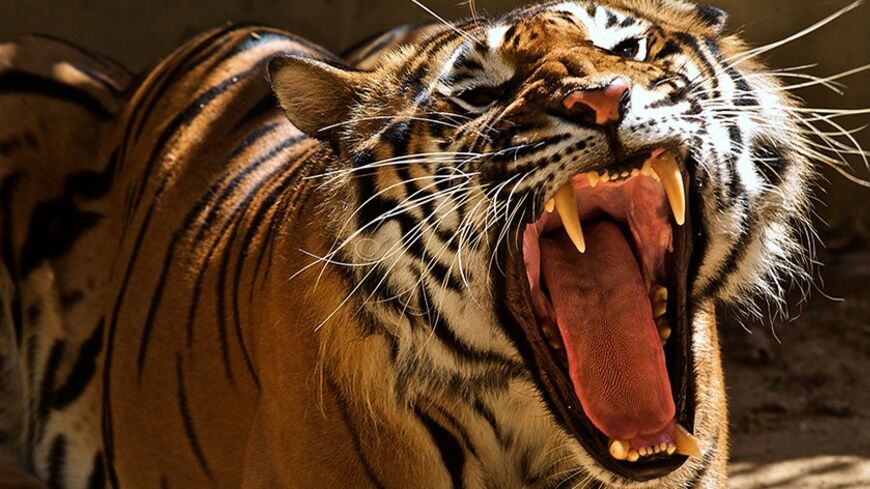 A male tiger roars while being transported from the private zoo to Beirut-Rafic Hariri Airport. - Omar Alkalouti

BEIRUT — “It’s a very complicated process to send animals. There are about 20 people involved,” Maggie Shaawari, vice president of Animals Lebanon, says as she drives up a steep dirt road in northern Lebanon and juggles Facebook updates, taking photos of the lion and tigers in crates ahead of her and calling on her iPhone to the animal welfare organization’s office, people at the airport, press contacts and other staff members.

In the heart of Lebanon's Chouf region, deep in a valley, there's a private zoo that was previously full of exotic animals — lions, tigers, flamingos, a chimpanzee, even a cheetah. But with the collaboration of French veterinarian Jean-Christophe Gerard, the sanctuary he works at, Tonga Terre D’Accueil, and Lebanese organization Animals Lebanon, this zoo slowly has been emptied of some of those animals.

With the cooperation of the zoo owner, a lioness, a tigress and a male tiger were removed April 8. They were put in internationally approved crates, and driven out of the valley, to the Beirut-Rafic Hariri Airport to start the long trip to the French sanctuary.

This journey has been long in the making. The first time Gerard came to the zoo for these particular animals was in October 2013, to check the health of the cats and insert microchips. There were four cats then — two lions and two tigers. About a month after that visit, Animals Lebanon was notified that the male lion had died and had been promptly sent to a taxidermist to be stuffed.

Neither Gerard nor Jason Mier, the Animals Lebanon executive director, seem convinced it was natural death.

Despite the disappointment, Animals Lebanon worked relentlessly on permits, documents, raising money and arranging flights to make the rescue for the remaining three cats happen.

The staff at Animals Lebanon is exhausted. But it's not just because of today’s grueling process of moving three big cats from cage to crate to truck to moving van, up the winding roads of Chouf and through the cargo and customs of Beirut’s airport. In the last two weeks, Animals Lebanon has rescued a Nile crocodile, two baby hyenas, a lion, two tigers and, on April 5, a chimpanzee named Charlie.

The “Beirut crocodile” was a particularly notable rescue, as it was an animal that had spawned a sort of lore in the city, with rumors flying that there were multiple crocodiles in the Beirut River — something Mier says is untrue. When the first sightings were reported in July, Animals Lebanon staff set up shop on the foul-smelling shores of the river with teams, including people from Lebanon’s civil defense and even a crocodile handler, Peter Prodromou, flown in from the United Kingdom.

The efforts were not enough to capture the crocodile, until a fisherman, Fadi Baalbaki, caught him by chance on April 3. The reptile is now being given the care it needs until it can be moved to a sanctuary outside of the country.

But for precedents, one of the organization’s most significant rescues to date is the recent confiscation of Charlie from Animal City zoo, in the north of the country. They worked for eight years to confiscate this chimpanzee. Charlie stands out for two reasons: he is the last-known chimpanzee in the country, according to Mier, and this primate is what originally brought him to Lebanon.

Mier came to Lebanon in January 2006, and with the support of the Ministry of Agriculture, unsuccessfully tried to confiscate Charlie a month later. The chimp was hidden by the zoo, then put back on display a couple of weeks later, after Mier had left the country.

Eight years on, things have come full circle. Through the work of Animals Lebanon — which was founded in 2008 and created to protect animals through legislation, education, rescues and campaigns — as well as other animal welfare organizations such as Beirut Ethical Treatment of Animals (BETA), awareness is increasing and the culture is slowly shifting in perception of animal rights.

In addition, Lebanon recently joined the Convention of International Trade of Endangered Species (CITES), which Mier attributes to their success in finally being able to extract Charlie from Animal City.

The story of how custody of the chimpanzee was handed over is wild. First, Animals Lebanon got a ruling from criminal judge Dina Dabboul, who confirmed that Charlie was smuggled into the country, detained illegally by Animal City and was to be handed over to the organization. They took one step further, fearing that the chimpanzee would be hidden again and went to the judge of urgent matters, Antoine Tohme, who ruled that Charlie was to be placed in Animal Lebanon’s custody.

On April 5, a group of 21 went to Animal City zoo, including police officers, bodyguards, two lawyers, a representative of the judge, a veterinarian from Spain and several members of Animals Lebanon.

“I cried like a little girl,” Mier says when he talks about the happiness and vindication he felt when they walked out with Charlie, eight years later.

Emotions aside, this has set a precedent for future wildlife rescues in Lebanon.

“That’s what CITES in part is supposed to do [protect animals]. To campaign to join an international convention only to use the convention, that feels good,” Mier says.

Charlie’s escape is a story of hope for other wildlife living in similar conditions throughout the country. The fact remains that Lebanon is still a country where there is rampant animal smuggling, many pet shops keep their animals in terrible conditions and there are still a handful of zoos operating that cannot take care of their wildlife properly.

“There were eight zoos when we first started identifying them. These are all miserable places. Luckily, we were able to close down two, we worked with an owner to close another. We’ve removed most of the exotic animals from [the Chouf zoo]. Every single zoo has animals that are dying or simply pacing and doing these stereotypical behaviors because the conditions are so bad,” Mier says.

For Animals Lebanon, and the three cats that took off from the airport on the evening of April 8 with Gerard, the future looks to be a promising one. Like the long trip from Beirut to the sanctuary in France, which involves layovers, multiple flights and a cross-country drive, the journey will not be easy. But they are going home.

When asked if he will return to Lebanon, Gerard replies with a smile, “Maybe I’ll be back for the hyenas.”