Giza Zoo, once considered one of the best zoos in the world, is struggling to improve conditions for animals as well as visitors after losing international accreditation. 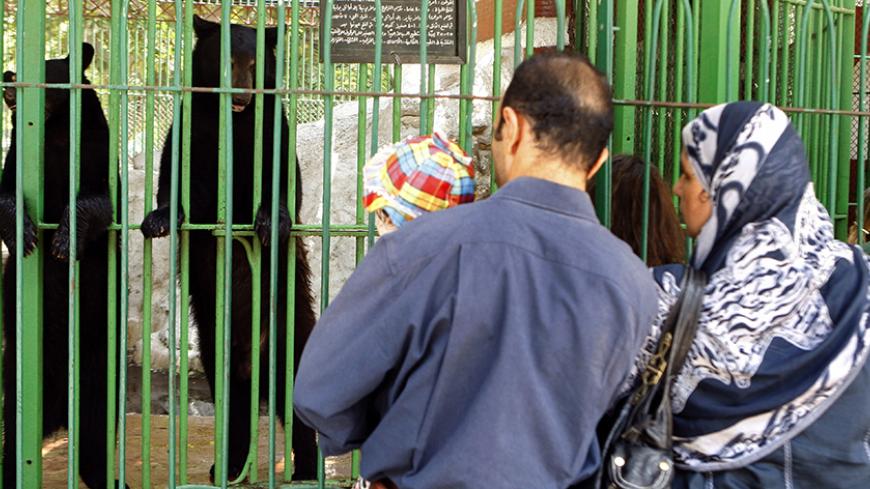 CAIRO — The Giza Zoo, built by Khedive Ismail Pasha and opened in 1891 under Khedive Muhammad Tawfiq Pasha, was considered a world-class facility when it opened. Covering an area of about 80 acres, the oldest zoo in the Middle East now houses approximately 6,000 animals, including some endangered species. In 1993, it ranked as the third best zoological garden in the world. Today, the zoo no longer figures among the top 330 such facilities. In 2004, it lost its accreditation from the World Association of Zoos and Aquariums (WAZA).

Salah Talaba, a famous Egyptian animal breeder known as “Africano Talaba,” claims that the situation at the zoo is so dire that he will pay the Ministry of Agriculture 10 million Egyptian pounds (about $550,000) a year as rent in return for managing the park. Currently, the zoo is overseen by the ministry's Central Administration for Zoos, which is affiliated with the ministry. Talaba's family has been in the animal breeding business for more than 100 years and owns a mini zoo in Kerdasa, a village in the Giza governorate.

Talaba's offer, made June 28, generated mixed reactions. Some officials, among them Othman al-Montasser, the secretary of parliament’s Agriculture Committee, welcomed the general idea of private money going toward the zoo. He told Al-Monitor that the private sector is better at utilizing resources and has the potential to better develop the park. In direct reference to Talaba, however, Hamed Abdel Dayem, a ministry spokesman, denounced the idea. He told Al-Monitor that Talaba's offer would add to the financial burden on Egyptian households, because the goal of the private sector is to maximize profits devoid of social responsibilities.

Speaking to Al-Monitor, Talaba said, “Any proposal for development is immediately met with negative responses and spite from officials instead of being discussed to point out its pros and cons. In fact, when I announced my offer to the Ministry of Agriculture that I would like to rent and manage the park, the ministry launched campaigns against my private zoo, which is now threatened with closure.” According to Talaba, after he announced his intention to rent the Giza zoo, a group of veterinarians affiliated with the Ministry of Agriculture targeted his mini zoo, and a number of violations were issued.

Talaba said that the Giza Zoo had lost its WAZA accreditation due to failing to clean the animals’ enclosures and recycling the waste from the park, both of which resulted in filling the park with overpowering, bad odors. In addition, the water pumps in the artificial lakes did not work, and some animal enclosures were not commensurate with their breed or size.

The animals have not always been properly cared for, reportedly leading some of them to possibly commit suicide in 2013. Officials denied the story, claiming that some animals had become tangled in enclosure wire. The animals do not receive adequate medical care, with, according to Egyptian parliamentarian Mona Munir, only 19 veterinarians available for the 6,000 or so animals and birds. By comparison, the Toronto Zoo, one of the best in the world, employs 3,000 veterinarians, cooks and workers for 5,000 animals. The zoo keepers in Egypt are poorly paid, and street vendors roam through the park without supervision. The toilets are in bad shape.

Talaba said that his offer is aimed at developing the park and reviving its glory, while paying the Ministry of Agriculture to do so. On top of his $500,000 "rental fee," he also offered to pay all the zoo’s expenses, including workers’ wages, animal feed, facility maintenance and veterinary services. Talaba also claims that he would increase the zoo’s animal populations by 25%, importing ones the zoo does not have while exporting animals that it has in abundance. He said he will also pay for the cost of setting up elevated railways for tours, install new water pumps and breed fish in the lakes.

To bring in revenue, Talaba said he would offer annual membership subscriptions for 100 pounds ($5) and aim to target 10 million people, to generate 100 million pounds a year ($5.5 million). The minimum cost for a family to visit the zoo would be 300 pounds ($16), including a train tour and meals in restaurants.

Montasser told Al-Monitor, “The privatization of zoos and parks has become a necessity after long decades of government neglect that has left them in poor condition instead of being tourist attractions and not only a place to be visited by locals during holidays.”

According to him, the area the park covers is large enough to allow the creation of more lakes as well as the introduction of new plantings and trees, along with open-air restaurants. He would also like to maintain affordable admission prices, especially for visitors of limited means.

Mohammad Ragai, the head of the Central Administration of Zoos, said of Talaba’s offer: “It is not acceptable to hand the zoo to inexpert people or families who have been smuggling animals and receiving rich visitors in their private parks, with car entry fees up to 400 pounds [$22], while the Giza Zoo welcomes visitors for only 5 pounds [28 cents],” he said. “Claims that the zoo has suffered 20 million pounds in losses last year are not true. In fact, the zoo took in 7 million pounds [$390,000] in net profit. The zoo is a member of the African Association of Zoos and Aquaria and is committed to its standards.”

Ragai's figure of a $7 million pound profit could not be confirmed, as there is no official website that publishes such financial information. The charge of the zoo losing 20 million pounds, or some $1 million, a year was leveled by Talaba, but it is unclear how he arrived at this figure.

Ragai also remarked that in May, Antoinette Kotze, the head of the Research Center at the Pretoria Zoo of South Africa, had visited the zoo and praised it and the efforts being made to preserve wild and endangered animals. Ragai asserted, “Egypt’s zoos welcome any cooperation with specialists with scientific experience and expertise, rather than collaborating with people generating media hype and undermining government institutions, which are all under the control of several oversight bodies, including the Accountability State Authority.”

Dayem told Al-Monitor, “The Giza Zoo, like other state institutions, has been neglected, which resulted in several problems that have now been treated and remedied.” He claimed that the zoo is now recycling the park’s waste, cleaning cages, installing new water pumps in the lakes, installing benches so patrons don't have to sit on the ground, setting up an amusement park equipped with the latest electronic games and building four fountains.

While additional benches have been installed, there are still not enough to sufficiently accommodate visitors, and many lakes remain stagnant.

He also conceded, “Animals were suffering from malnutrition because of former corrupt officials in the Central Administration of Zoos. Animal welfare provisions are now under tight supervision. We also increased the animal populations by 40% and the bird populations by 100% through scientific [breeding] means. We also exchanged a few animals with zoos in China and India, as we lack the funding to import new animals. Moreover, animal enclosures have been developed to become more natural-looking habitats. Also, for the first time, a database of the zoo’s animals has been established in track species, numbers, age and mating.”

Dayem believes that the ministry is unlikely to privatize zoos, as they are a profitable sector that also operates in a way that allows the poor to enjoy the parks. He stressed that the government is working on having the Giza Zoo reaccredited by WAZA after the completion of the rehabilitation of the elephant and lion enclosures.