The US Justice Department says the domain names of Aletejah TV's websites were owned and operated by a US company and affiliated with the Iran-backed Kataib Hezbollah militia. 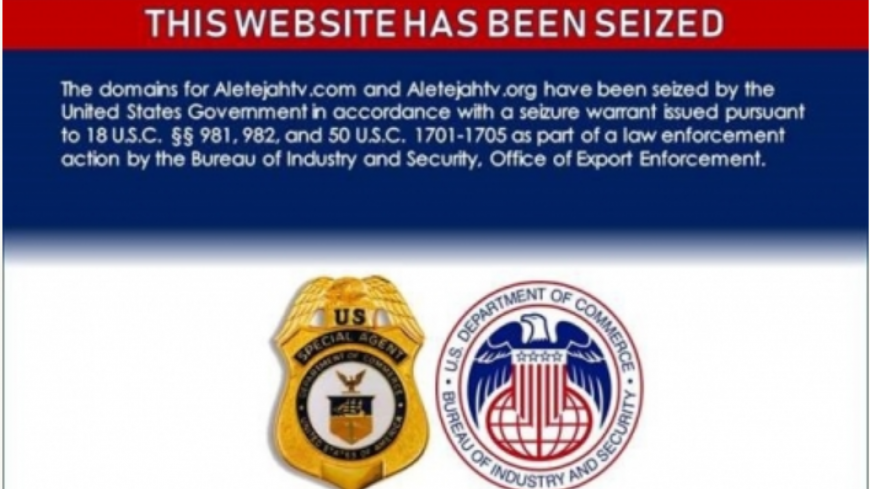 The US government has seized control of Iraqi news sites affiliated with Iran-backed militias in the country. The seizure follows the United States also taking over the websites of energy companies that allegedly facilitated a deal to deliver Iranian fuel to Venezuela.

The Department of Justice said the websites are affiliated with Kataib Hezbollah, which is an Iran-backed militia in Iraq that the United States designates as a terrorist organization. The government was able to gain control of the websites because federal law prohibits designated terrorist organizations from utilizing services in the United States without a license from the Department of the Treasury. The seized domain names are owned and operated by a company based in Arizona, the Department of Justice said in a press release.

A Department of Justice spokesperson told Al-Monitor that the US Attorney’s Office for the Northern District of Georgia carried out the seizure. The office did not respond to a request for comment. There are several web services companies in Scottsdale, Arizona, where the government said the business hosting Aletejahtv.com is based.

Aletejah TV appears to have connections to Kataib Hezbollah. In January, the network broadcast a message from the militia warning Iraqi security forces to stay away from US military positions in Iraq. The United States had just killed Iranian commander Qasem Soleimani via an airstrike in Baghdad. This followed an attack on the US Embassy there by Kataib Hezbollah supporters. Iran bombed US military targets in Iraq days after Kataib Hezbollah’s announcement.

The US has upped efforts to pressure the Iranian government and its allies in Iraq since leaving the Iran nuclear deal in 2018. The United States accuses Iran of seeking to build a nuclear weapon, which Iran denies. Iran’s militia allies in Iraq also often attack US military positions in the country in an effort to get the United States to withdraw.

Washington has focused its recent efforts on extending a weapons embargo on Iran and reimposing UN sanctions on the Islamic Republic. The UN has so far rejected these moves, in part because the United States is no longer party to the Iran nuclear deal.

The seizure of Aletejah’s websites follows the US government taking over websites of energy companies that allegedly facilitated an oil deal between Iran and Venezuela. In late August, the Department of Justice announced the seizure of websites for Mobin International, Sohar Fuel and Oman Fuel. The fuel shipment violated harsh sanctions the US places on both countries.

Aletejah’s web domain names were owned by a company in the United States, according to the Department of Justice. This makes it clear how the government justified its seizure.

The Department of Justice said the seizure warrant for the Mobin International, Oman Fuel and Sohar Fuel websites is under seal. The department alleged that the fuel shipment came from Iran’s Islamic Revolutionary Guard Corps, which is also a designated terrorist organization and subject to such actions.

The Department of Justice, when asked about the three companies, said it can take websites that use infrastructure based in the United States.

“US authorities are able to seize domains, including ones that utilize US-based infrastructure,” a department spokesperson told Al-Monitor.

The department declined to comment on whether the UAE or other governments assisted in seizing the websites.