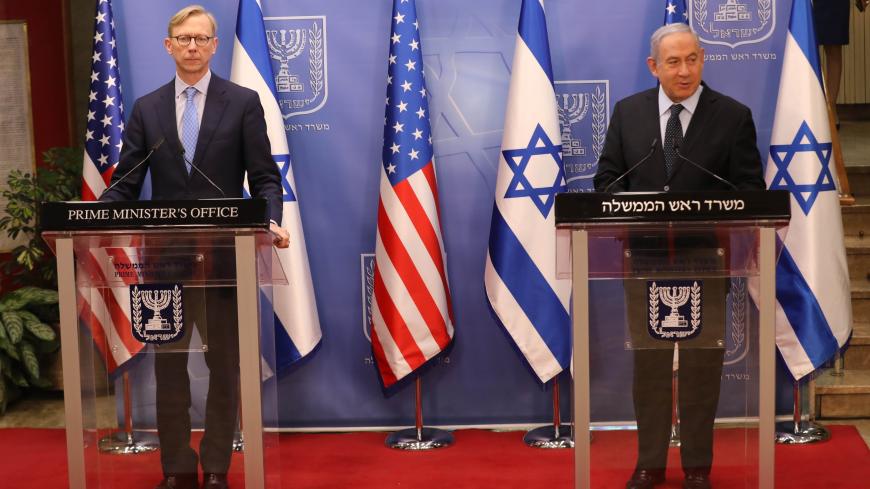 US special representative for Iran Brian Hook (L) and Israeli Prime Minister Benjamin Netanyahu (R) give a joint press conference at Netanyahu's office in Jerusalem on June 30, 2020. Netanyahu said Israel would “not allow Iran to establish a military presence in Syria.” - ABIR SULTAN/POOL/AFP via Getty Images

Israel is believed to have conducted hundreds of airstrikes on suspected Iranian targets in Syria throughout Syria’s civil war. The Israeli government rarely acknowledges the campaign.

Israeli military officials did claim responsibility for a 2018 strike on what it said were advanced Iranian air defense weapons at the T4 air base. At least seven Iranian personnel were reported killed in the strike.

The United States and Israel have called on Iran to remove its military forces from Syria, where they are propping up the battered army of President Bashar al-Assad in a nearly decade-long civil war.

Israeli Prime Minister Benjamin Netanyahu said in June that Assad would be “risking his future” if he did not expel Iranian troops from his country. Speaking alongside Brian Hook, the US lead envoy on Iran policy, Netanyahu said Israel would “not allow Iran to establish a military presence in Syria.”

The United States has provided support for Israel’s air campaign against Iranian targets in Syria. Israeli aircraft have used American air corridors with Pentagon permission in the past. The US outpost at al-Tanf, officially there so US special forces can pressure Islamic State, also provides Israeli aircraft with a waypoint to penetrate Syrian airspace.

James Jeffrey, the US lead Syria envoy, told Congress last year that Iran had been moving radar equipment and missiles into Syria that were considered a threat to Israel, as they were deemed unnecessary for fighting what remains of the rebellion against Damascus.

Washington is engaged in a campaign of economic sanctions to pressure Iran to renegotiate the 2015 nuclear deal and pull its troops from Syria, among other goals.