Hayat Tahrir al-Sham, which controls most of Syria’s Idlib province, forbids the teaching and even discussion of philosophy. 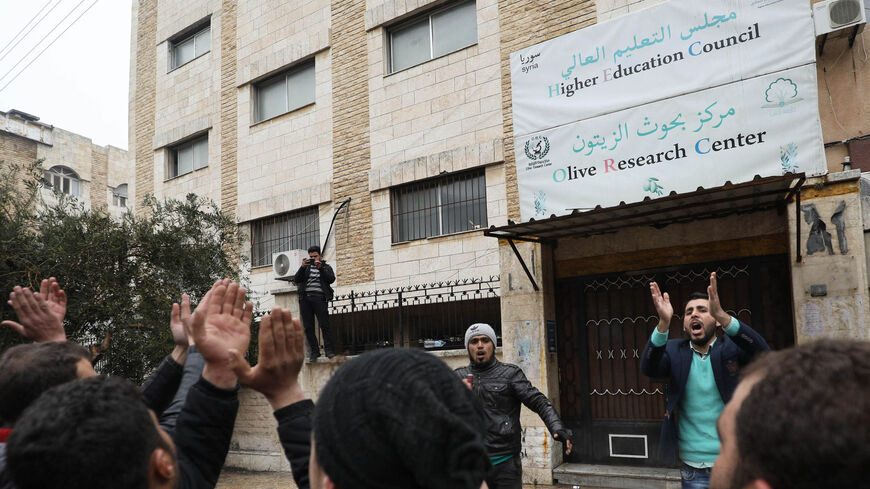 Syrian university students protest in the city of Idlib on Feb. 9, 2019, after jihadists of the Hayat Tahrir al-Sham organization closed many private education centers in the northwestern Syrian province of Idlib. - OMAR HAJ KADOUR/AFP via Getty Images

Hayat Tahrir al-Sham, which controls almost the entirety of Syria’s Idlib province, forbids philosophy and related courses in the universities of the area.

HTS did not allow the University of Idlib, which is run by its Syrian Salvation Government to open a philosophy department. It also banned any philosophical forums or cultural events as well as publications about philosophy.

The group’s critics, including activists from the Syrian revolution and academics who do not live under its scope of control, consider banning philosophy part of HTS’ ideological war on critical thinking.

HTS seized the province of Idlib in early 2019 after defeating the Nour al-din al-Zenki Movement, which controlled areas in the western countryside of Aleppo. Its formation of the government meant that no other factions had a say in the management of Idlib.

HTS was designated as a terrorist organization by the United States and the United Nations Security Council in 2018 and international sanctions are imposed on the organization.

Back in 2013, a group affiliated with Jabhat al-Nusra, now HTS, cut off the head of the statue of Abu al-Alaa al-Maari, a blind Arab philosopher, poet and writer, in his northwestern Syrian hometown of Maarat al-Numan. To some jihadist factions, the statue was the embodiment of atheism and heresy and must be destroyed. Also in 2013, Islamic State militants destroyed the statue of the Abbasid Caliph Harun al-Rashid in Raqqa, because the worship of statues or idolatry is prohibited in Islam.

Omar Johar, a 30-year-old teacher, holds a bachelor's degree in philosophy. He told Al-Monitor in an interview, “At the beginning of the jihadist tide and the rise of extremist groups in the years 2013 and 2014 in Syria, I was insulted and bullied a lot.”

He went on, “Sometime in 2013, I was in the city of Harem [in Idlib], and I went into the mosque to pray. A sheikh who was affiliated with Jabhat al-Nusra at the time was lecturing a group of students. He invited me to join the course. He asked me about my academic background, and I was very nervous to tell him I had studied philosophy. When I did, he kept muttering, ‘There is no power but of God,’ which is a phrase indicating the occurrence of a calamity.”

Johar said, “He also kept saying ‘I seek refuge in Allah’ for this evil suggestion I made. I felt so ashamed. The sheikh invited me to atone and ditch the philosophy books and turn to religious texts instead. The students were eying me with disdain as if I were an infidel for majoring in philosophy.”

Johar is now living in one of the displacement camps in Deir Hassan in Idlib’s northeastern countryside. He is paid by a charity organization to teach children to read and write.

Al-Monitor spoke with Abdel Karim al-Oaid, who earned a philosophy degree from the University of Aleppo. With no job opportunities in his field, he is now also teaching children. He said, “I was constantly harassed by jihadists who consider philosophy a form of atheism.”

Maamoun Mahmoud, another philosophy graduate from the University of Aleppo, told Al-Monitor, “I suffered a lot during my studies and once I graduated, I would not find a job in the areas under the control of jihadist groups. This is why I headed to Turkey and I am now working in the construction field here.”

Khaled Abdel Jalil, who has a philosophy degree from Damascus University, told Al-Monitor, “I used to teach children at a school run by one of the factions affiliated with what was then Jabhat al-Nusra. They forced me to take a religion test to see if I was influenced by philosophy and turned to atheism. They then made me take a Sharia course to learn about religion and teach children about that.”

He went on, “I am now living in a village in Idlib’s western countryside and teaching children. I receive my salary from the Syrian Salvation Government through a certain organization. But I am not working in my field.”

Orabi Adul-Hayy Orabi, a researcher at the Jusoor Center for Studies and a philosopher from Aleppo who is currently based in Turkey, told Al-Monitor, “All jihadist groups reject philosophy and related fields in their areas of control, whether the Taliban, al-Qaeda, IS or HTS. Philosophy is the study and discussion of ideas not as an absolute fact or reality. This is in direct conflict of the jihadist dogma that categorically rejects this concept. Philosophy is based on reasoning. The leaders of jihadist groups are graduates of Sharia schools and applied sciences, which are not abstract.”

He explained, “Jihadist groups seek to eliminate or destroy any text or material that they believe pose a threat to their religion or religious texts. For them, philosophy is heresy. Contemporary philosophy has undermined the centrality of religious texts, which is totally unacceptable for these groups.”

Orabi added, “The majority of HTS leaders are not academics and have little to no knowledge of philosophical texts. Many sheikhs also are totally against teaching philosophy, and HTS is keen to keep them satisfied. Should HTS want to reinvent itself and announce that it does not have a problem with this field, it would anger the sheikhs and religious scholars. HTS does not want that. I don’t believe that there will be any philosophy department at the University of Idlib, which is affiliated with the Salvation Government. HTS Shura Council members refuse to allow philosophy classes, not because they lack qualified teachers, but because this is in direct conflict with their dogma.”

Ahmed Abu Hajar, head of the University of Idlib, has close ties with HTS and its government. He told Al-Monitor, “There was no need for a faculty or department of philosophy from an academic or scientific point of view. The Faculty of Literature did not make any recommendation to this effect. Should there be a need to have this department and we have the capabilities and competencies to do so, a department for philosophy might be established.”

He went on, “The specializations currently taught at the university are the same as before and include education and civics, science, law, administrative sciences and arts. New faculties have been created according to the needs of the area and the community, including the faculties of medicine and pharmacy.”