Egypt, which welcomed the recent normalization agreement between Israel and the United Arab Emirates, and has its own longstanding peace treaty with Israel, does not seem to be as enthusiastic about Sudan doing the same. 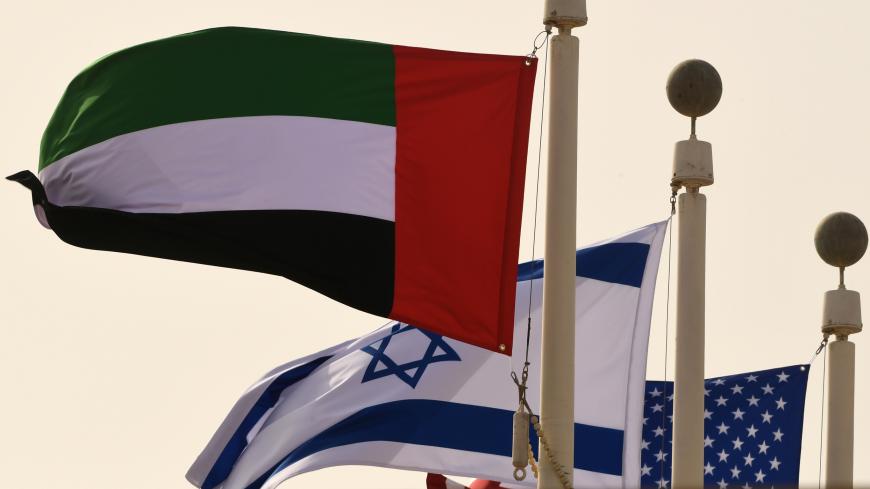 The Emirati, Israeli and US flags sway in the wind at Abu Dhabi airport, in the first-ever commercial flight from Israel to the United Arab Emirates, Aug. 31, 2020. - KARIM SAHIB/AFP via Getty Images

CAIRO — No official Sudanese statements have been made on the details of the Aug. 25 meeting between US Secretary of State Mike Pompeo and Sudan’s Prime Minister Abdalla Hamdok, along with Chairman of the Sovereignty Council Lt. Gen. Abdel Fattah al-Burhan.

Sudan’s Information Minister Faisal Saleh merely said in a press statement Aug. 25, “The [Sudanese] transitional government does not have any authority to deal with the issue of normalization with Israel.”

The American statements, however, were more in line with the US vision, saying that Sudan’s full normalization of ties with Israel is only a matter of time.

According to Israeli Public Broadcasting Corporation, Israeli Intelligence Minister Eli Cohen revealed Aug. 16 contacts between Jerusalem and Khartoum, expecting the signing of a normalization agreement between the two nations before the end of the year. This was also confirmed by the spokesman for the Sudanese Ministry of Foreign Affairs, Haider Badawi, in a statement to Reuters Aug. 18, which caused him to be fired from his position. “We don't deny that there are communications [with Israel],” Badawi said in his statements.

Normalization with Israel remains the subject of widespread controversy between the political, military and civilian forces in Sudan. Some information indicates that the military camp, i.e., the Sovereignty Council, welcomes normalizing ties. Burhan had already met with Israeli Prime Minister Benjamin Netanyahu in Uganda in February.

Many Sudanese, however, remain strongly opposed to such a move, namely the Forces of Freedom and Change alliance (FFC). FFC has clearly announced its rejection of normalization with Israel, stating that it is not the prerogative of the transitional government to tackle this issue.

Meanwhile, Egypt, which had already made peace with Israel 40 years ago, welcomed the normalization agreement signed between the United Arab Emirates and Israel Aug. 13.

“This will bring peace in the Middle East,” Egyptian President Abdel Fattah al-Sisi wrote in a tweet Aug. 13, commenting on the agreement.

There are Egyptian concerns, however, that Israeli influence would expand in the south, starting with Sudan and the Nile Basin countries.

An Egyptian diplomatic source who is well informed on the African issue spoke to Al-Monitor as Pompeo was in Khartoum. The source said, “Egypt is not a party to any measures related to facilitating a normalization agreement between Israel and Sudan. We are watching Sudan’s moves at the diplomatic level with regard to establishing political and economic relations with Israel, in a bid to assess the impact of such moves on Egyptian interests in the region."

The source, who refused to be named, added, “Egypt maintains balanced and good relations with the Sudanese side. There are Egyptian efforts to help Sudan at the diplomatic level to have its name removed from the US State Sponsors of Terrorism list. This remains the main obstacle before Sudan’s political and diplomatic openness to the international community.”

Commenting on how normalization with Israel would contribute to solving Sudan’s diplomatic problems, Sabah Moussa, an Egyptian journalist and researcher in Sudanese affairs, told Al-Monitor, “Removing Sudan from the State Sponsors of Terrorism list means the United States would [financially] drain Khartoum by forcing it to pay reparations and compensation. Sudan is already set to pay $70 million as part of a final settlement to the families of those killed in the 2000 USS Cole bombing [in Yemen].”

She said, “This is not to mention the ongoing consultations to set payment for those affected in the attack on the US embassies in Nairobi and Dar es Salaam.”

Moussa added, “I do not think that normalizing ties with Israel would be the key to solving Sudan’s [political] problems. Yet some parties in Sudan tend to believe this is true. But this is a false idea, especially since Israel’s investments in Sudan will mainly benefit Israel and would deplete Sudan’s natural resources in particular.”

“The transitional government in Sudan was wise to delay deciding on the normalization issue until the election of a new government in a bid to avoid further divisions, especially with FFC’s strong rejection, which includes the National Umma Party, and the Communist and Baath parties,” she noted.

During his visit to Sudan, Pompeo also touched on the stalled negotiations between Cairo, Khartoum and Addis Ababa on the Grand Ethiopian Renaissance Dam (GERD).

According to Foreign Policy, upon his return from Sudan, Pompeo approved a plan to halt some US aid to Ethiopia estimated at $130 million, given its obstinate stances on the dam.

“I don’t think Sudan requested the United States to place more pressure on Addis Ababa regarding the GERD. Sudan’s demands from the United States in exchange for normalization with Israel are clear, [and are] mainly associated with its interests at home. Khartoum is seeking to have its name removed from the US State Sponsors of Terrorism list, and to have support for its economy and its democratic transition, as well as an end to its political isolation,” Moussa said.

Hani Raslan, adviser at Al-Ahram Center for Strategic and Political Studies, told Al-Monitor, “The beginning of official relations between Khartoum and Tel Aviv will be one of the major changes in the Arab region, unlike the old foundations on which the entire Arab system had been based since World War II,” in reference to boycotting the Israeli state.

“It is not clear yet how Cairo will handle this in order to reduce the expected risks to its interests in the African continent and the Nile Basin and to adapt to the new changes. The new changes require that Cairo reevaluate and review its policy and strategy of action in the Arab and African region, and especially in the periphery of the Nile Basin countries,” he added.

The pertinent questions, however, remain about the form of any understanding resulting from normalizing ties between Israel and Sudan and its repercussion on Egypt's interests in the African continent and the Nile Basin. This is especially true at a time when Cairo is facing great challenges with the Ethiopian intransigence on the GERD and its insistence on filling the dam without prior negotiations to settle any existing disputes regarding Egypt’s share of the Nile water.