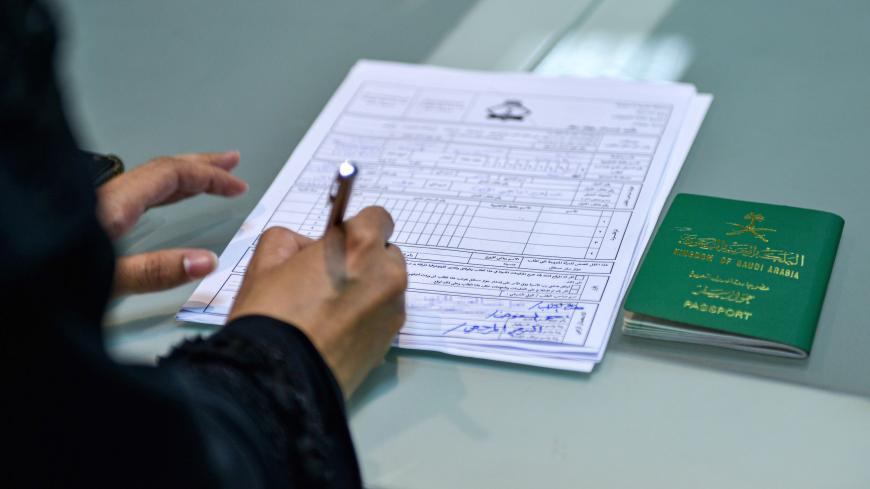 A Saudi woman fills out a passport renewal application at the Immigration and Passports Center in the capital Riyadh on Aug. 29, 2019. - FAYEZ NURELDINE/AFP via Getty Images

“I have clients who escaped the Ritz-Carlton event because they were prudent enough to secure second citizenship beforehand. … The moment you hire me you are admitting to yourself that there is a danger,” David Lesperance, a Canadian lawyer who has advised dozens of affluent Gulf families since the early 1990s, told Al-Monitor.

In November 2017, 381 prominent Saudi businessmen, royals and officials were caught up in the "anti-corruption" crackdown led by Crown Prince Mohammad bin Salman.

Saudi authorities reportedly pressured a quarter of Ritz-Carlton detainees, including through physical abuse, to hand over to the state assets worth a total of over $106 billion.

Ryan Bohl is a Middle East analyst at the US-based geopolitical-­risk firm Stratfor. He told Al-Monitor anti-corruption campaigns led by Gulf Cooperation Council (GCC) countries are now “used to seize assets of those the state sees as disloyal.”

In this context, the global trade of second citizenship — often associated with tax evasion, money laundering and corruption — is viewed by some Gulf nationals who are exposed to risks related to political oppression and regime change as a strategic way out.

Cyprus and the bin Laden family

Preferred destinations are publicly known — Cyprus, Ireland, Turkey, the United Kingdom, the United States, Canada and the Caribbean islands, among others — but firms operating in this secretive industry do not disclose how many Gulf nationals bought second citizenship.

Internal documents leaked to the Qatari broadcaster Al Jazeera earlier this year revealed, however, the extent of Cyprus’ citizenship by investment program: about 2,500 individuals from 74 countries bought a Cypriot passport between 2017 and 2019.

Although Russian, Chinese and Ukrainian citizens account for the vast majority of names listed in the Cyprus Papers, applications from Saudi Arabia have “increased since the rise of Crown Prince Mohammad bin Salman,” Al Jazeera's investigation reads.

In 2019, Cyprus granted citizenship to the relative of a Saudi national detained at the Ritz-Carlton and to a member of the bin Laden family — once one of the most influential in the kingdom. During the crackdown, three bin Laden brothers were detained and the family’s conglomerate effectively taken over by the state.

According to The Independent, some wealthy Saudis moved assets “out of the region” in the days following the Ritz-Carlton arrests, and Capital Economics’ senior emerging markets economist Jason Tuvey noted “a jump in Saudi residents placing banking deposits abroad.”

GCC states either prohibit dual citizenship or condition it on government approval but are not actively cracking down on second citizenships, Bohl believes. “They are, however, trying to find ways to ensure that such secondary passports do not become shields by which dissidents can attack their policies with impunity,” the analyst said.

Saudi operatives abducted three princes living in Europe between 2015 and 2017 and a year later a hit squad killed and dismembered Saudi journalist and Washington Post contributor Jamal Khashoggi, who was a US resident with three children who are US citizens.

“It is beyond having a second nationality,” said Ziad Karkaji, managing partner of a Beirut-based firm specialized in residency and citizenship programs. Speaking about Al-Waleed bin Talal, a high-profile Saudi investor who holds a Lebanese passport, Karkaji told Al-Monitor, “With all his power and connections, he still stayed in the Ritz-Carlton.”

In September 2020, a group of Saudi dissidents, most of them in exile, crossed a red line by announcing the formation of a pro-democracy political party to call for peaceful change and combat what they referred to as state “violence and repression.”

“Every society is three meals away from chaos”

Beyond political considerations, getting second citizenship is “a long-standing practice” for Gulf businessmen and investors who travel frequently and want to avoid visa processing time, Bohl recalled. According to The Henley Passport Index, a power ranking of passports, the Cypriot travel document is twice as powerful as the Saudi.

Given the complexity of navigating national and international legislation, high-end intermediaries such as private bankers and family offices often recommend wealthy individuals seeking second citizenship to hire an expert. Some jurisdictions, like Malta, publish the names of foreigners who have acquired citizenship in the island state.

Applications for second passports from GCC nationals also soared about a decade ago during the Arab Spring. Some senior officials and members of royal families fear social discontent could lead to shifts in power and their assets being frozen.

As the global economy is expected to gradually shift away from carbon-intensive energies, the ruling families in the Arab Gulf states face unprecedented economic and sociopolitical challenges to reinvent their oil-dependent model of governance. Experts warn the change could cause political instability and eventually increase demand for second citizenship.

“Well, as Lenin said, 'Every society is three meals away from chaos.'” Things happened, you know; in Tunisia it started with a fruit seller,” Lesperance commented.