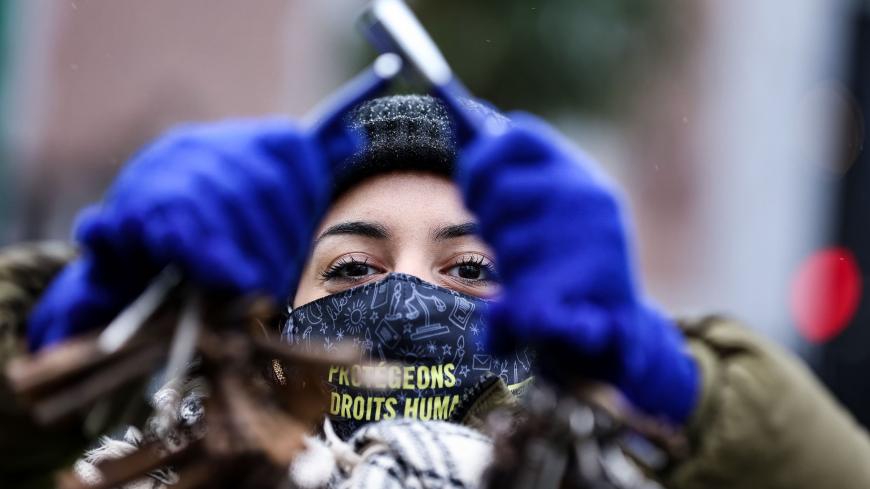 An activist of the human rights group Amnesty International takes part in an action in front of the embassy of Saudi Arabia in Brussels on Jan. 8, 2021. - KENZO TRIBOUILLARD/AFP via Getty Images

Al-Haider and al-Ibrahim had remained in pretrial detention since they and 10 other journalists were arrested in April 2019 in what was seen as a crackdown on dissent. Al-Haidar’s mother, Aziza al-Yousef, is a well-known women’s rights defender who was also arrested for her activism along with other right-to-drive campaigners in May 2018.

The Freedom Initiative, a Washington-based advocacy group, called their release a welcome but long overdue step.

"Bader al-Ibrahim and Salah al-Haider should have never been jailed in the first place and their release should certainly not be on a 'temporary' basis," Freedom Initiative’s Bethany al-Haidari said in a statement.

“They have been detained, separated from loved ones, and tried as terrorists for simply expressing their views. Peaceful dissent is not terrorism,” she said.

Since the 2018 murder of Washington Post columnist Jamal Khashoggi, Saudi Arabia’s rights record has come under increased scrutiny in Washington. During his election campaign, President Joe Biden vowed to reassess the US-Saudi relationship and take away the kingdom’s “dangerous blank check.”

"We welcome and are closely monitoring the conditional release of US citizens Badr Al-Ibrahim and Salah Al-Haidar," a State Department spokesperson told AFP.

In December, Saudi-American doctor Walid Fitaihi was sentenced to six years in prison over tweeting his support for the 2011 Arab Spring protests and for obtaining US citizenship. Fitaihi, a Harvard-educated physician, was swept up in the Saudi government’s anti-corruption purge in November 2017 that saw hundreds of businessmen, Saudi royals and other perceived government critics detained at the Ritz-Carlton hotel in Riyadh.

Al-Haider and al-Ibrahim’s release came the same day Biden announced an end to US support for the Saudi-led coalition in Yemen as well as the appointment of a special envoy to oversee a diplomatic resolution to the conflict.