The Hashemite Kingdom is in the midst of a COVID-19 outbreak after earlier success fighting the virus. 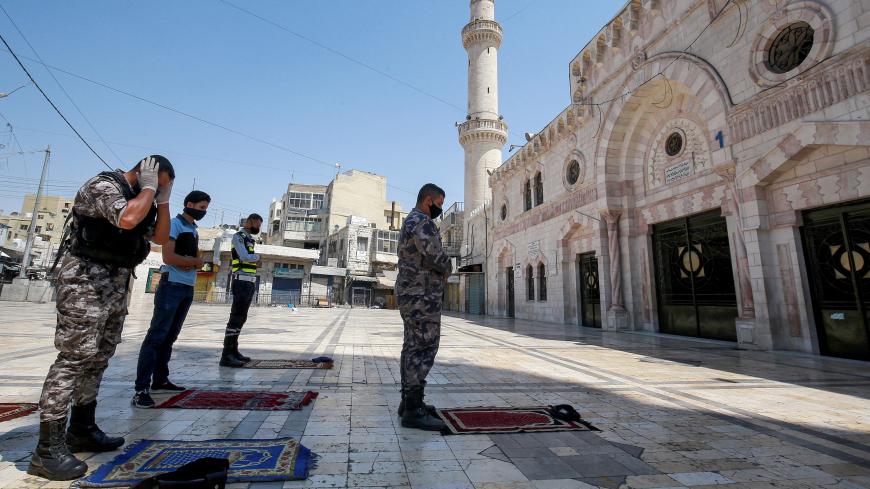 Policemen perform the Muslim Friday prayers outside the Grand Husseini Mosque during a curfew due to the COVID-19 coronavirus pandemic in Jordan's capital, Amman, on Aug. 28, 2020. - KHALIL MAZRAAWI/AFP via Getty Images

The Jordanian government says it will imprison or fine anyone holding large gatherings as the country contends with a surge in COVID-19 cases.

Jordan issued a defense order stipulating that people cannot hold weddings, mourning rituals or any event with more than 20 people, the state-owned Jordan Times reported Thursday. For gatherings under 20 people, attendees must socially distance, wear masks and refrain from shaking hands, among other measures.

The Hashemite Kingdom is in the middle of an outbreak of the coronavirus. For months, Jordan’s total confirmed cases were under 1,500 — significantly below the figures in some of its neighbors. Infections began to rise rapidly in late August, according to Worldometer.

Jordan registered 213 new cases today, including 104 in the capital, Amman, the state-run Al-Mamlaka news outlet reported. This brings the number of cases Jordan has recorded to 4,344. It also recorded three new deaths for a total of 29.

Jordan has instituted some of the strictest anti-virus measures in the world. People entering the country from abroad must wear a bracelet that tracks their movements as they quarantine for two weeks in a hotel. Jordan imposed a total lockdown in March, but began easing restrictions in April.

Some of the virus mitigation measures have been criticized. In August, Jordanian teachers told Al-Monitor that the government used defense orders that focus on the virus to detain and silence them. The Teachers Syndicate and other groups are critical of the effects the virus-related restrictions are having on the Jordanian economy.