Jordan previously said it would resume regularly scheduled flights in and out of Amman in August. The country's harsh anti-coronavirus measures have been successful but also criticized. 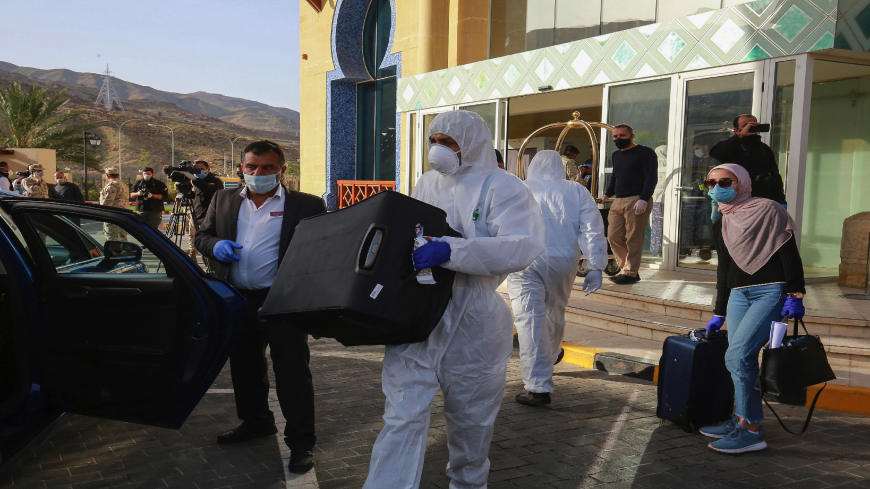 A worker helps a mask-clad woman with her baggage as she prepares to leave a Dead Sea resort where she has been quarantined for 14 days, approximately 60 kilometers out of the Jordanian capital Amman, on March 30, 2020. - KHALIL MAZRAAWI/AFP via Getty Images

Jordan’s international airport resumed regularly scheduled international flights on Tuesday. The Hashemite Kingdom has had success fighting COVID-19, but its strict travel and movement restrictions have created hardship for citizens and residents.

Queen Alia International Airport outside of Amman will have six flights a day for now, Reuters reported. This number will increase as the airport readies itself to further implement strict health and social distancing guidelines, according to the outlet.

Jordanian authorities previously said the airport would reopen in August, but this was delayed amid continued virus concerns. Flights first stopped in March at the start of the coronavirus pandemic, and only repatriation flights were allowed. Several other countries in the region also halted most flights for months.

Jordan implemented some of the strictest travel stipulations in the Middle East in response to COVID-19. Returnees to the country had to wear a wristband that tracked their movements as they quarantined in hotels near the Dead Sea. Within the country, the army deployed in March to ensure people did not leave their homes unless absolutely necessary. Restrictions gradually eased starting in April.

The harsh measures have led to criticism amid a crackdown on dissent and economic strife. Jordan’s Teacher Syndicate labor union told Al-Monitor in August that the government used defense laws passed at the start of the pandemic to detain their members.