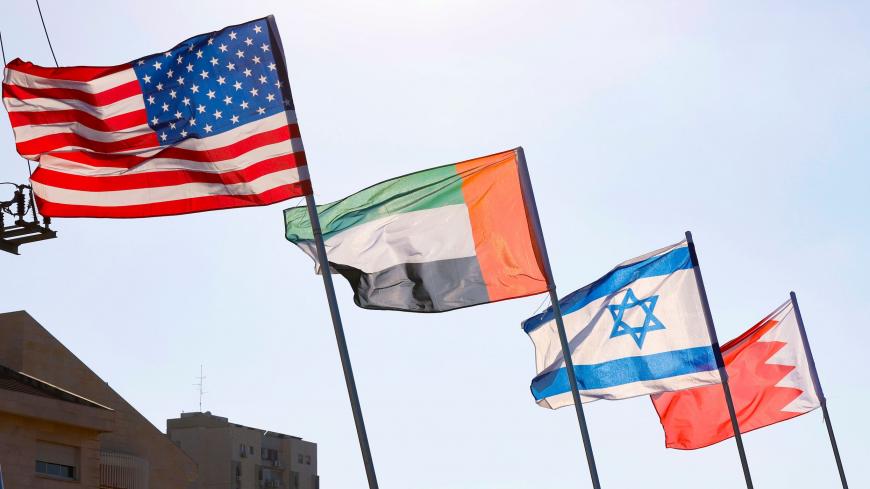 A road is decorated with the flags of (L-R) the US, the United Arab Emirates, Israel and Bahrain, in the resort city of Netanya in central Israel, on Sept. 13, 2020. - JACK GUEZ / AFP) (Photo by JACK GUEZ/AFP via Getty Images

Ashkenazi tweeted about the exciting conversation, saying he and the Bahraini foreign minister would remain in contact with the goal of deepening diplomatic relations in the Middle East. The day before, Netanyahu had announced that Bahrain would be joining the United Arab Emirates in normalizing ties with Israel.

On Monday night, a large delegation headed by Netanyahu boarded a Boeing 777. The crowd included Netanyahu’s wife Sara, his two sons Yair and Avner, Mossad head Yossi Cohen and various officials, advisers and journalists. But Ashkenazi remained at home, as did Benny Gantz, who is both alternate prime minister and minister of defense. The only representative of the Foreign Ministry was Tal Becker, the ministry’s legal adviser who was involved in the wording of the agreement.

Netanyahu clearly had no intention of sharing the limelight around the two surprise agreements. He has never been generous with compliments or thank-yous to his political contemporaries. Tomorrow will be no different, featuring only Netanyahu, his friend US President Donald Trump, UAE Foreign Minister Sheikh Abdullah bin Zayed and Bahraini Foreign Minister Abdullatif bin Rashid Alzayani.

The Israeli public became acquainted with the last two figures only recently. Netanyahu clearly sees the event as a victory over all those enemies and adversaries who have ridiculed him throughout the years: Now, finally, a right-wing Israeli leader is bringing peace in exchange for peace (contrary to the Oslo "peace-for-land" paradigm) together with two high-level representatives of Arab states. It is a moment of glory he will not share with anyone, not even his senior partners in the government.

Netanyahu did not invite Gantz and Ashkenazi to the White House, but a high-placed source in the Blue and White Party told Al-Monitor on condition of anonymity that even if Netanyahu had invited them, they wouldn’t have joined him: “It would have looked bad for them. They don’t want to look like Netanyahu’s stooges, and that’s what would have happened. So it was better to remain at home and tackle COVID-19 instead.”

Gantz and Ashkenazi publicly embraced the agreement. They praised the prime minister for a historic achievement that will change the face of the region. As former chiefs of staff, both of them understand the tremendous potential of these agreements and likely assume that they, too, will enjoy some of the benefits via direct talks and contacts with their counterparts in the Emirates, Bahrain and perhaps additional Arab states that will join the club.

But the reality behind the scenes is much more complex. Over the last few weeks, the tension in Netanyahu and Gantz' relationship has reached a new high. Netanyahu claims that Gantz conducts himself like a government within the government and instead of being a partner, he tries to undercut the prime minister. Gantz clearly feels that Netanyahu has broken all the rules of partnership in this government, with efforts to evade the rotation agreement itself. The prime minister’s constant tongue-lashing against the legal system embarrasses the Blue and White.

Meanwhile, Netanyahu’s bribery trial is due to begin in January. As a result, the two men only really talk about technical issues and no real political partnership exists. Both sides realize that if not for the COVID-19 crisis, Netanyahu would have dismantled the government and called for new elections. Therefore, Netanyahu and Gantz spend much of their time waging pre-election campaigns against each other while Israel's economic and health realities force them to stay at the same government table.

Thus, the hours prior to Netanyahu’s flight to Washington were spent in a marathon government meeting regarding the worrisome rise in COVID-19 infections in Israel. Ultimately, the Likud and Blue and White supported the decision to impose a second nationwide lockdown on Israel’s citizens, despite the damaging economic repercussions of such a move.

The media devoted almost all its attention to the governmental impotence against COVID-19. Netanyahu’s peace agreements were pushed to the sidelines. The leading television newscasts on Monday night opened with Israel being the first developed nation to impose a second lockdown on its citizens, while the prime minister was in the midst of a press conference before getting on the plane to Washington.

It was not one of Netanyahu’s finer moments as prime minister. There were no festivities that evening, only a sour and sad sense of failure. It was clear that millions of citizens would spend the Jewish New Year immersed in worry, many of them troubled about their livelihoods and health.

In this atmosphere, when a young Channel 13 journalist asked Netanyahu about the coronavirus crisis during a press conference, the prime minister reacted with irritation. He acted like his friend Trump and attacked the journalist, accusing her of delivering a pre-prepared speech rather than asking a question.

This is the price Netanyahu pays for insisting on conducting state matters alone: The successes are attributed solely to him, but so are the failures. Perhaps if he had involved Gantz and Ashkenazi in his decisions, the anger over COVID-19 would be directed at them too.

At the beginning of the government meeting on Sept. 13, Netanyahu did tell all the ministers (including those from Blue and White) that each one of them will have a part in the historic peace agreements. “I want to promise you that each and every one of you, through your ministries, will be part of it because this is going to be a different kind of peace. This will be a warm peace, economic peace in addition to the diplomatic peace — also peace between peoples. There will be brisk traffic in direct air links between the countries. The great excitement that exists in the country is also reflected in the very great excitement in Bahrain and the UAE among the public at large.”

Some of the ministers shifted uncomfortably in their seats at Netanyahu’s words. A Blue and White minister told Al-Monitor on condition of anonymity, “That last statement was disconnected from reality. I find it hard to believe that on a day like today, so close to the Jewish New Year, Israeli citizens are really concerned about peace with the Emirates. Israelis are worried about themselves, their own lives and health. All they can see currently is a prime minister failing to manage this serious corona crisis."