Rockets rain from Gaza as Netanyahu speaks in Washington

Militants in Gaza fired a barrage of rockets at Israel’s southern towns while Prime Minister Benjamin Netanyahu was speaking at the White House signing ceremony with the United Arab Emirates and Bahrain. 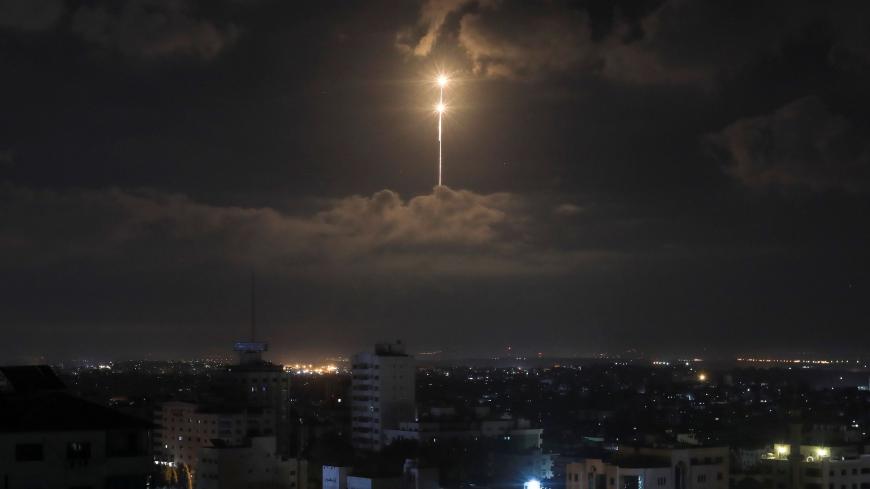 The Iron Dome anti-missile system fires interception missiles in the sky early on Aug. 21, 2020, at rockets launched against Israel.

An Israel Defense Forces spokesperson said this morning that Israeli jets had struck Hamas targets overnight after Gazan operatives fired a salvo of 13 rockets at Israel.

Incoming-rocket alarms sounded in the southern cities of Ashdod and Ashkelon. A warning band appeared on Israeli TV screens just as Prime Minister Benjamin Netanyahu finished his White House speech, urging residents of the south to enter bomb shelters. Three people were reportedly injured by the rocket launched at Ashdod.

The 13 rockets were fired at Israel throughout the night, with eight of them intercepted by the Iron Dome missile defense system. The IDF now believes the rockets were fired by the Islamic Jihad. The IDF said schools in communities near the border fence could reopen this morning, though all are expected to close on Friday afternoon for three weeks, as part of a nationwide lockdown against the coronavirus.

Speaking on his way back from Washington after signing the normalization agreements with the United Arab Emirates and Bahrain, Netanyahu stated that the Palestinians were trying to hinder peace efforts and pledged that they would not do so. “I am not surprised that Palestinian terrorists fired at Israel exactly during this historic ceremony. They want to set back peace. They won’t succeed in doing so. We will strike all those who reach out to harm us and we will extend a hand in peace to all those whose hands are extended in peace to us,” said Netanyahu.

President Reuven Rivlin tweeted today, “This morning we are with the residents who had hours of rocket fire and impacts. We are full of appreciation for their resilience. Our prayers are with those injured in the rocket attacks last night in Ashdod and our support for the IDF, which has been responding to the attacks from Gaza. We will not allow terrorism to go unanswered. The security of Israeli citizens will not be neglected.”

The mayor of Sderot criticized Netanyahu, saying, "Congratulations on the peace, but what about the lives of the children living in Sderot and in the communities near the Gaza border? Don’t they deserve to sleep quietly like everybody else?"

Yamina leader Naftali Bennett also lambasted the government, calling for a stronger action against Hamas. Bennett tweeted, "Throughout the night, terrorists continued firing rockets on the homes of residents of the south. A white, sleepless night for hundreds of thousands of children and families in the south. A foreigner won’t understand [these feelings of fear]. We became accustomed that this is out fate. But it’s not. Israelis living in the south are not doomed to suffer rocket fire for ever and ever. This is the results of many years when deterrence was lost, years of passiveness and lack of initiative. But things could be different."

Reports last Saturday indicated that Egypt was brokering talks on a proposed prisoner swap between Israel and Hamas, taking advantage of a renewed truce between both sides. An Egyptian intelligence delegation shuttled between Gaza and Tel Aviv to advance the talks, but after the rocket barrage, it is unclear where the negotiations stand. A report this morning said that a UN envoy is expected in Gaza this afternoon to discuss a prisoner exchange deal with Hamas seniors. Israeli observers are unsure whether the rocket salvo was a brief protest against the normalization agreements or if Israel should expect more of the kind.