Israel’s president apologizes for failure to cope with coronavirus

President Reuven Rivlin apologized for the failure of the country's leadership to better cope with the coronavirus and appealed to citizens to follow new lockdown restrictions that are going into effect. 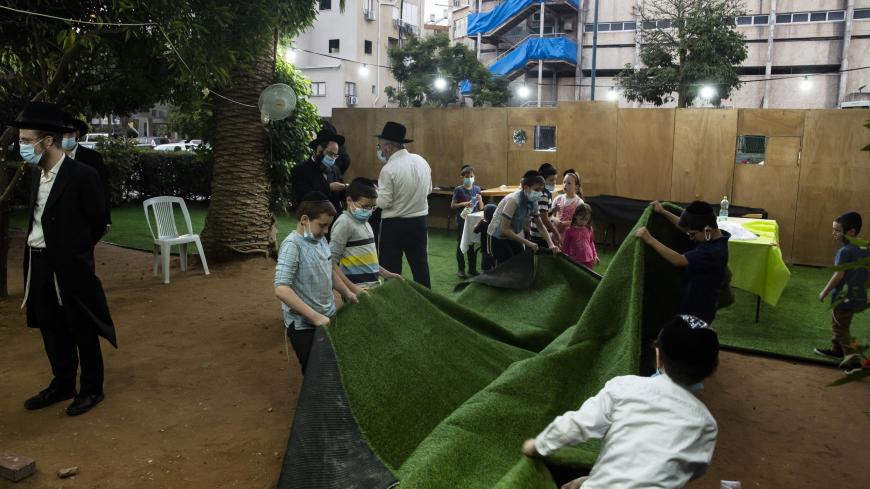 Ultra-Orthodox Jews build an outdoor synagogue amid the coronavirus pandemic ahead of Rosh Hashanah, the Jewish New Year, on Sept. 17, 2020, in Bnei Brak, Israel. As the country grapples with a surge in COVID-19 cases it has imposed a three-week lockdown that starts Sept. 18 and that coincides with Rosh Hashanah and Yom Kippur, the Day of Atonement. - Amir Levy/Getty Images

Just before Israel was to enter its second nationwide lockdown, President Reuven Rivlin apologized to Israelis over the country's failure to better handle the coronavirus and asked for forgiveness over his breaking the confinement rules during the first pandemic closure in April when he celebrated the Passover dinner with his daughter and her family, contrary to government restrictions. "I understand the feelings of confusion and uncertainty, the anxiety that many people are feeling. On a personal level, I ask your forgiveness for my behavior here at the president’s house during the lockdown during Passover. … My loneliness is no more painful than the loneliness that many of you — who were so careful to follow the word and the spirit of the instructions — experience,” said the president.

Rivlin said the government had failed in handling the coronavirus crisis and pleaded with Israelis to follow the new restrictions that go into effect at 2 p.m. Sept. 18, just before the beginning of the Jewish New Year. ‘’I want to say to the government of Israel — its leaders, ministers and advisers: The trust of the people is beyond value. We must do everything to restore personal, medical and economic confidence to our fellow citizens. This is a second chance and we must take it because we will not, I fear, get a third one.”

The final version of the lockdown approved by the Cabinet generally prohibits people from traveling more than 500 meters (a third of a mile) from their home except for essential shopping, going to work and walking for exercise. The country also will close schools for three weeks. Synagogues would open only partially for the High Holidays season. Many Israelis expressed anger over limits imposed on synagogues, while political demonstrations are allowed. It was also unclear whether some preschools would be authorized to open. Israel could go to work, though most businesses and the public sector would function at a reduced capacity. Business and restaurant owners are warning that a second lockdown would ruin them, after a first, very difficult closure in April. Several restaurant and shop owners said they will open despite the restrictions.

The Health Ministry announced Sept. 17 that the country’s pandemic death toll had risen to 1,169, with 4,791 new cases diagnosed, a new record, since the previous day. With numbers still climbing by the day, Prime Minister Benjamin Netanyahu summoned the coronavirus czar, Dr. Ronni Gamzu, to an urgent meeting the same day to discuss further tightening the lockdown. According to some reports, Netanyahu called the meeting because he is concerned about the public’s response to the lockdown.

About 6,000 police officers and 1,000 Israel Defense Forces soldiers are to reinforce the lockdown this weekend, patrolling main transportation axes. The government fears that many Israelis will try to join family members for the traditional New Year's festive dinner and lunch in violation of the lockdown restrictions.

Anti-Netanyahu protesters called for demonstrations to be held on the eve of the lockdown in various locales across the country. They are calling for Netanyahu's resignation because of his trial on bribery charges and because of what they say is his failure to manage the coronavirus pandemic, which has plunged Israel into an unprecedented economic crisis.