According to health experts, weddings and conspiracy theories are behind the high number of new infections in Arab-Israeli society. 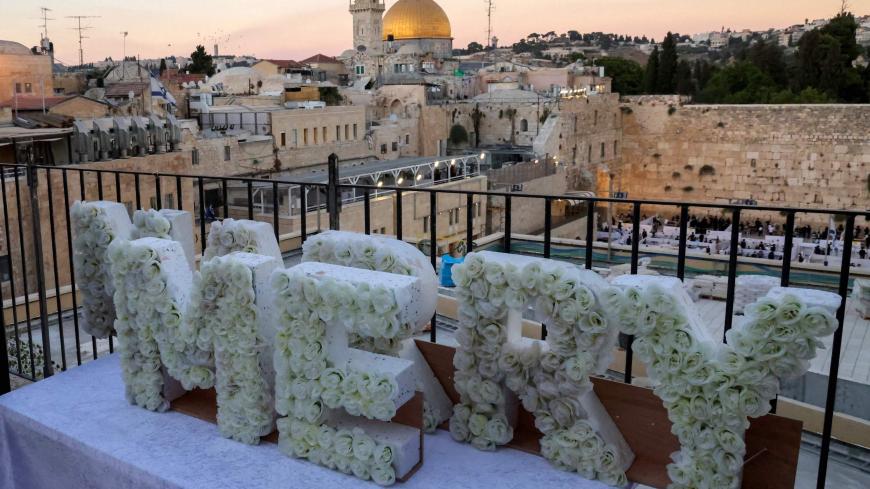 The Western wall and the Dome of the Rock mosque are pictured behind wedding floral decorations in Jerusalem's Old City on Aug. 25, 2020. - EMMANUEL DUNAND/AFP via Getty Images

Israel will go into full lockdown this week starting Sept. 18, the eve of the Jewish New Year. Once that happens, Israel will be the first country in the developed world to impose a second lockdown.

How did Israel go from being the country that “world leaders wanted to study because of its successful approach to dealing with the coronavirus,” as Prime Minister Benjamin Netanyahu boasted, to a “red-zone” state with significantly higher infection rates than the rest of the world? In a report by Johns Hopkins University, Israel ranked first in the world in per capita infection for the week ending on Sept. 2, with an average of 199.3 infections per million inhabitants every day of that week.

On Sept. 6, the government announced a curfew from 7:00 p.m. to 5:00 a.m. and the full closure of all educational institutions in 40 towns, most of them Arab or ultra-Orthodox communities. The Arab population is having a very different experience in the second wave. During the first, Arab society excelled at following guidelines and just 5% of infections were among the Arab community. Today, new infections from the Arab community make up about 30% of the nation’s total.

What happened in the second wave? How did the Arab community go from being a source of admiration to one of infection since life went back to normal in May? The main source of infection seems to be weddings and other special events.

In a conversation with Al-Monitor, the Ministry of Health’s spokesman for the Arab sector, Dr. Zahi Said, explained, “Unlike during the first wave, the current situation in the Arab population does not bode well. Some 40% of coronavirus patients who are hospitalized and 30% of newly infected patients come from the Arab community. After investigating the matter, we discovered that the main cause of infection is weddings, while in mosques and other houses of worship, we found that the people in charge have been following the rules and guidelines. The problem with weddings is that there is no one to take charge or assume responsibility, as they have been taking place in the yards of private homes instead of event halls. During the first wave, people obeyed the instructions to the letter. And it should be remembered that wedding season in Arab society lasts mainly from June to October, explaining the outbreak in the second wave.”

When asked why the Ministry of Health wasn't better prepared to deal with weddings, Said answered, “We did work together with the coronavirus czar, Roni Gamzu, and with the head of the coronavirus staff for Arab society, Ayman Saif, on plans to open event halls with restrictions on the number of attendees, fully in line with the guidelines. Unfortunately, the government then made a sweeping decision to close all halls, causing people to get married in their homes instead. Inevitably, there was no insistence on following the guidelines.”

The holy month of Ramadan took place this year in April-May, at the height of the first wave. Ramadan is a time of family gatherings, crowded shopping expeditions and group preparations for the evening meal to break the fast. Nevertheless, despite concerns among the local authorities about a Ramadan outbreak, the Arab community followed the guidelines and faced the challenge successfully. This time, however, people seem less worried about the virus due to the low rate of infection in Arab society. There are even some who claim that it was all a conspiracy in the first place, that the virus doesn’t really exist.

One hub of infection is the Arab town of Tira. In a conversation with Al-Monitor, chemist Riam Samara-Abu Much of Tira explained, “Tira may be considered a red city, but the apathy and indifference are widespread among the inhabitants. We’ve seen weddings with hundreds of participants, restaurants are full and the stores are packed with shoppers. In other words, life continues as normal. I feel as if people were more concerned during the first wave. Today I hear from quite a few people that this virus is one big lie, as much as I try to tell them that they’re wrong.” She went on, “I do support the decision to impose a total lockdown, because I am worried that we will reach the point that Italy and Spain did. Nevertheless, there is no doubt that the government has been a complete failure in everything to do with fighting the coronavirus. This is an emergency government that was formed to fight the virus, but it looks like the coronavirus is at the bottom of its list of priorities. The government is dealing with everything except for COVID-19.”

Such is the predominant feeling among a large part of the Arab population, which is aware the rise in infection is due to weddings and other events. The current government was formed last May under the banner of fighting the coronavirus, but its real focus seems to be Netanyahu's political and legal survival. There is also deep distrust in a system known for its lack of enforcement, with the guidelines allegedly flaunted by senior officials, including Netanyahu and President Reuven Rivlin.

Attorney Shady Zaher of Nazareth told Al-Monitor, “There isn’t enough enforcement. Weddings won out over fear of the virus a long time ago. The fine for holding a wedding in violation of the guidelines should be 50,000 or even 100,000 shekels [$14,000 to 28,000], and not the laughable sum of 5,000 shekels [$1,400]. That way, people will think twice before holding some event or other. Even if the government failed in informing the public and fighting the virus, the very least it could do is enforce its own guidelines.”