Turkish police detained a top Islamic State figure during a raid in the nation’s southern province of Adana as counterterrorism operations continue against the organization’s networks. 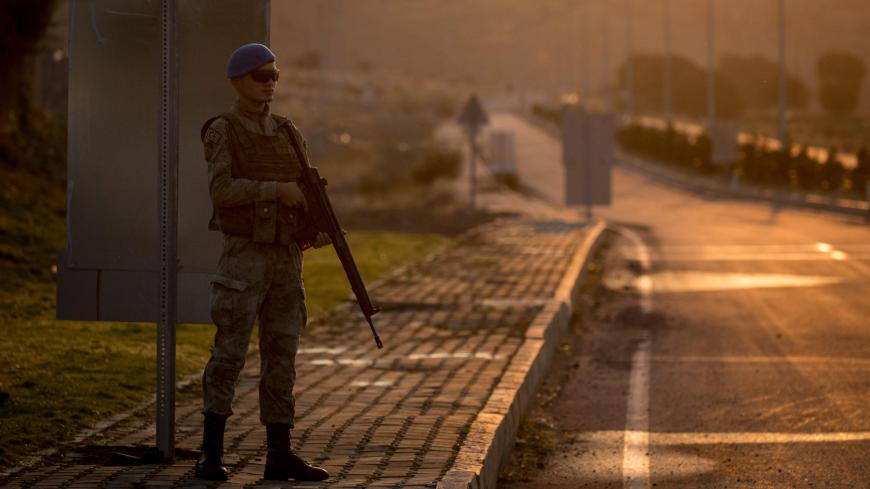 A Turkish soldier stands guard outside the entrance to Aliaga Prison Court on Oct. 12, 2018, in Izmir, Turkey. - Chris McGrath/Getty Images

ISTANBUL — A senior Islamic State figure was detained Monday during a police raid in Turkey’s southern province of Adana Monday, according to a statement by Interior Minister Suleyman Soylu. Soylu identified the suspect as Mahmut Ozden and alleged he had received orders to carry out an attack in Turkey.

“Daesh’s so-called emir of Turkey was captured and remanded in custody with important plans,” Soylu tweeted Monday, using the Arabic acronym for IS.

Eleven additional suspects were detained during Monday's raids, in which police seized Ozden’s computer and other digital evidence that reportedly indicate the group was receiving orders from Iraq and Syria to conduct attacks within Turkey as well as kidnap Turkish politicians and take them to Syria.

The news comes after a suspected IS member was detained in Istanbul last week while allegedly plotting “a sensational attack” on the city, highlighting the lingering threat posed by the terror group within the country and ongoing counterterrorism operations to prevent future incidents.

Soylu said the operation to arrest Ozden came after security forces detected increased activity by IS militants. Between 2014 and 2017, the group orchestrated a string of terror attacks in Turkey, killing about 300 people.

A Kalashnikov rifle was found during a search of the Istanbul suspect’s hotel room last week and security forces determined the unnamed individual was planning an attack on orders from Ozden.

“Incrementally, Turkey has been cracking down on the IS cells here and has made it operationally harder to function,” Nigar Goksel, Turkey project director for the International Crisis Group (ICG), told Al-Monitor. “There has been effective infiltration into IS and monitoring, in particular since 2017.”

Goksel added, however, that the arrest of a top member was unlikely to change the dynamics within IS and its networks in the region. As reported in a recent ICG study, suspected IS collaborators in Turkey are monitored closely and many are currently in prison or have served time behind bars. Among the many challenges posed by the group, Goksel noted the rehabilitation of IS members is a significant problem for the Turkish government, which she said cannot be addressed through counterterrorism programs alone.

“[Ozden] seems to have been [repeatedly] detained and released and charged ever since 2017 and some of this time he was in prison,” Goksel told Al-Monitor. “But was there anything beyond intelligence or police work to evaluate the risk he might pose? I doubt it.”

An August report by the inspector general of the US European Command stated that Turkey continues to act as a regional transit hub for IS members despite international efforts to reduce the group’s operational capabilities through extensive military operations in Iraq and Syria.

An estimated 10,000 to 15,000 IS fighters comprise the group’s existing networks in the region and maintain substantial control of Syria’s Deir ez-Zor province, according to Fabrice Balanche, an associate professor of geopolitics at the University of Lyon 2.

“Daesh is still very present in [Deir ez-Zor],” Balanche told Al-Monitor. “The night is under the control of Daesh. They are taking taxes from people. It’s not possible for NGOs to work in the area.”

He added, “It’s very difficult for the [Syrian Defense Forces] to control the area [since] Daesh kills people that work for local administration.”

Noting that Turkey indeed remains a vital transit hub for the organization, Balanche said allegations that IS was planning to kidnap Turkish officials were “hard to believe,” as the group has sought to avoid direct confrontations with Ankara in recent years to maintain regional networks.

Balanche said IS members may be seeking revenge against the Turkish government for collaborating in anti-IS operations with US security forces but maintained that a lack of information at the moment makes it difficult to pinpoint a cause for the reportedly increased activity by IS militants in Turkey.

“Probably [Ozden] crossed a red line and that’s why they arrested him,” Balanche said.

Meanwhile, the pending repatriation of hundreds of foreign IS fighters who are currently being held in Turkish custody remains a major challenge for Ankara. On Monday, the United States vetoed a United Nations resolution on the issue due to disagreements over protocols for IS militants and their family members.

“Turkey has many IS returnees or alleged IS members that it has to tend to here, not only of Turkish nationality but also from all over the region.” Goksel told Al-Monitor. “Law enforcement is overstretched and certainly for the Turkish public, it feeds into the perception that the West sees Turkey as a depot for problematic people.”