Iran says it is ready for more prisoner exchanges with the United States via Swiss mediation. 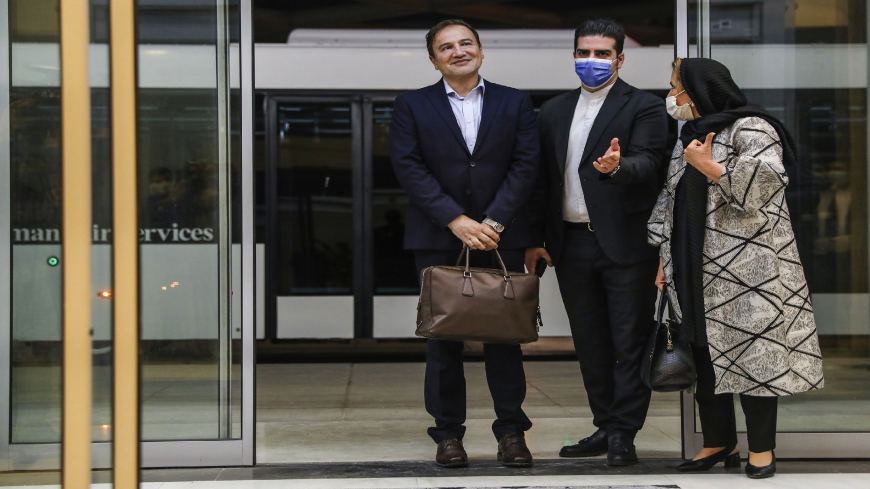 Iranian doctor Majid Taheri (L), who had been detained in the United States for 16 months, is welcomed by his wife and an Iranian Foreign Ministry official upon his arrival at Tehran's Imam Khomeini International Airport on June 8, 2020. The scientist returned home after his release from a US jail in what state media said was a prisoner exchange Tehran hopes can be repeated between the arch-foes. - MAJID ASGARIPOUR/MEHR NEWS/AFP via Getty Images

In an interview with Sputnik, Iran’s Foreign Minister Mohammad Javad Zarif said the country is open to more prisoner exchanges.

Zarif said Iran is prepared to exchange prisoners that are either held in the United States or are being held in other countries due to US pressure for dual-national prisoners being held in Iran. He said Iran currently does not have any sole US nationals.

Zarif was quick to add that Iran is not interested in direct talks with the United States on this issue and would continue the negotiations on prisoner exchanges via the Swiss.

Iran is currently holding a number of dual nationals, including Iranian-American businessman Siamak Namazi and his father, Mohammad Bagher Namazi. Siamak was arrested in 2015 and is now one of the longest-held dual nationals in Iran. His father traveled to Iran after his arrest and was also arrested and imprisoned. Another dual national being held in Iran is Iranian-American businessman Morad Tahbaz, who was arrested in 2018. In return for dual Iranian-American citizens, Iran wants the exchange of individuals who have been arrested either by the United States or in Europe due to US pressure for violating sanctions on Iran.

One of the most well-known dual nationals being held in Iran is Nazanin Zaghari-Ratcliffe, an Iranian-British dual citizen who was arrested in 2016. It is believed that Iran is holding Zaghari-Ratcliffe due to a canceled Iran arms purchase dating back to the 1970s, which in today’s terms would be over $500 million. Her husband has been instrumental in highlighting her case and keeping her name in the newspapers and media.

Zarif also said that Iranian and Russian military cooperation would continue. The United States is hoping to stop the arms embargo on Iran from expiring, which was part of the nuclear deal known as the Joint Comprehensive Plan of Action.

Deputy Commander of the Islamic Revolutionary Guard Corps Ali Fadavi said that if the United States takes “any stupid action, they will be countered with strength which they could have never imagined.” He also dismissed US attempts to create an alliance that would counter Iran in the region, saying “they have never been successful and will never be” on this plan. Hossein Dehghan, former defense minister and current adviser to Supreme Leader Ayatollah Ali Khamenei, spoke about US President Donald Trump. Dehghan said that Trump is willing to destroy and ruin the region in order to maintain dominance and control. He called Trump an “anarchist in the complete sense who not only put America in a sinkhole but put the entire West in a crisis.”