Iran sentences British-Iranian aid worker to another year in jail

Nazanin Zaghari-Ratcliffe had just competed her five-year sentence when she was summoned to court on a new propaganda charge. 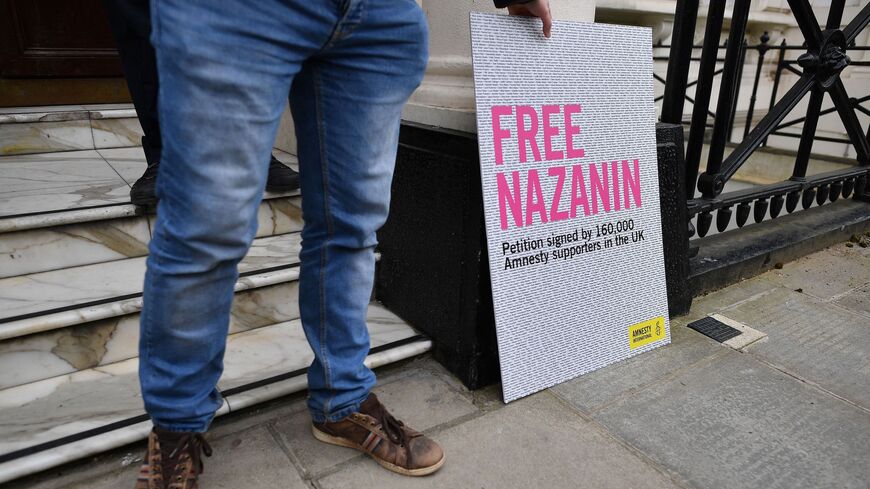 Richard Ratcliffe, husband of British-Iranian aid worker Nazanin Zaghari-Ratcliffe who has been jailed in Tehran since 2016, stands with a petition calling for her release after unsuccessfully attempting to deliver it to the Iranian Embassy in London on March 8, 2021. - BEN STANSALL/AFP via Getty Images

"Iran's decision to sentence Nazanin Zaghari-Ratcliffe to another year in prison is cruel, inhumane and wholly unjustified," Johnson tweeted on Monday. “She must be allowed to return to her family in the UK and we will continue to do all we can to get her home.”

An Iranian court convicted Zaghari-Ratcliffe on Monday of propaganda against the Islamic Republic, an accusation linked to her participation in a 2009 demonstration outside Iran’s embassy in London as well as an interview she gave to BBC Persian. The court handed Zaghari-Ratcliffe a one-year prison sentence and a one-year ban on leaving the country, her lawyer Hojjat Kermani told an Iranian news site.

Zaghari-Ratcliffe, 42, was arrested at Tehran’s airport in April 2016 on her way home to the United Kingdom from a family vacation. After being held in solitary confinement for more than eight months, she was sentenced to five years in prison for allegedly plotting to topple the government following a trial rights groups say was a sham.

Zaghari-Ratcliffe, a dual-national who worked as a project manager with the Thomson Reuters Foundation, denies the charges and says she traveled to Iran with her 22-month-old daughter to visit her family who lives there.

In March 2020, she and other prisoners were temporarily released from detention due to COVID-19 concerns in Iran’s overcrowded detention centers. Zaghari-Ratcliffe had since been confined to her parents’ home in Tehran with an ankle tag restricting her movement.

Following the completion of her five-year sentence, Iran’s authorities removed her ankle tag and ended her house arrest on March 7. But that same day, Zaghari-Ratcliffe was forced to return to court to face the new propaganda charge.

Kermani said he would appeal her latest prison sentence within 21 days, per Iranian law.

In a statement, Amnesty International voiced concerns that Zaghari-Ratcliffe’s detention is part of a wider effort by Iran to use foreign nationals as diplomatic leverage. Previous media reports have linked her detention to a decades-old debt owed by the United Kingdom.

“The ball is back in the UK’s court and it needs to respond firmly,” said Kate Allen, the organization’s UK director.

“Today is a terrible setback — there’s no doubt about that. But rest assured, the campaign to free Nazanin won’t end until she’s out of jail, out of the country and sitting on a flight back to Britain,” Allen said.

A number of Iranian-Americans are currently held by Iran on trumped-up terrorism and propaganda charges, including Emad Sharghi, Morad Tahbaz and father and son Siamak and Baquer Namazi. After more than 800 days in detention, British-Australian academic Kylie Moore-Gilbert was released in a November 2020 prisoner exchange.