COVID-19 has adversely impacted many segments of society across the globe, including Iranian women. Some fear the damage will be permanent. 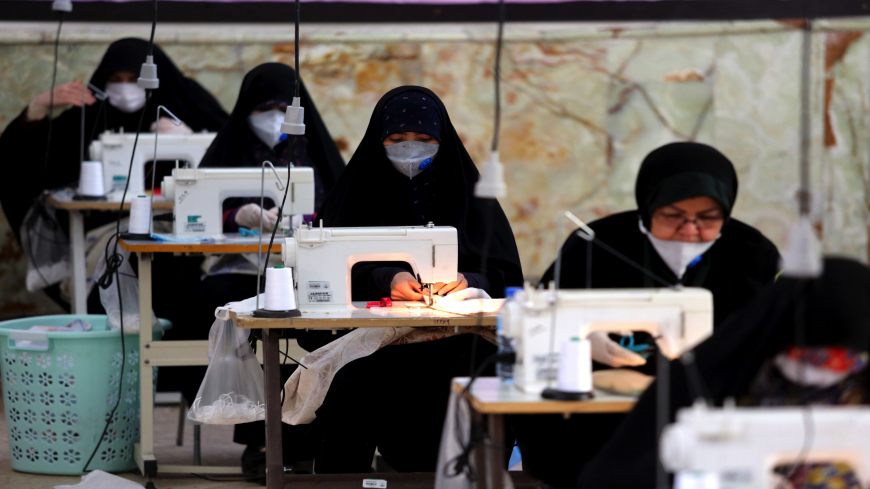 Iranian women, members of paramilitary organization Basij, make face masks and other protective items at a mosque in the capital Tehran, amid the novel coronavirus pandemic crisis on April 5, 2020. - ATTA KENARE/AFP via Getty Images

It is not easy to work in a segregated economy while coping with the impact of sanctions and a global pandemic — Iranian women have never been this vulnerable. Women constitute one-fifth of the employed population in Iran. Their share of jobs is roughly below 20%. Many Iranian women work menial tasks to support their families, which means they work without a contract in seasonal or part-time jobs. Thus, they are not receiving either benefits or insurance. Iranian authorities call these jobs "unofficial employment," a category that exists outside the jurisdiction of Iran's labor code. The conditions discourage many women from seeking employment. Thus, their participation rate in the labor force remains low. According to the International Labor Organization, only one of every five Iranian women participates in the labor force.

Even when they enter the market, a job is not guaranteed. Women's unemployment rate is twice that of men. The Statistical Center of Iran's (SCI) last pre-pandemic quarterly report in fall 2019 estimates the unemployment rate for women is 17% compared to 7.9% for Iranian men nationwide. In the province of Tehran, the most cosmopolitan region of the country, young women seeking employment were facing an astonishing unemployment rate of 45%. The unemployment rate for men in the same age group has been 17% in the province of Tehran. Iranian women's position in the labor market had already been vulnerable when the coronavirus pandemic began. Now, the magnitude of the negative impact of the global pandemic on Iranian women is disturbing, and so is the government's lack of response.

It is not easy to determine how many jobs have been lost due to COVID-19 and how many had already been lost to US-imposed sanctions. Iran's economy had begun to shrink months before the arrival of the coronavirus. However, the troubling fact remains that Iranian women are suffering disproportionally more than their kinsmen at an increasing rate. Previously, SCI had reported that Iranian women had lost 145,000 jobs in the winter of 2020 compared to the winter of 2019. The number of job losses has quadrupled since then. It is not easy to measure the real impact of current events on women's employment in Iran, as authorities cannot track part-time jobs or women working in markets out of their jurisdiction.

One cannot hide the severity of the situation for Iranian women. Despite facing discrimination and barriers in the job market, the number of female heads of households has increased by 58%, according to Iranian authorities in the past decade. Ironically, Iranian leaders are not known for encouraging women to enter the job market. If anything, they have been discouraging women from working, reminding women that their proper place and position in life is that of a devoted mother and wife. However, Iran's economic realities dictate their own terms. Iranian women have been supporting their families, shouldering an increasing financial burden. When a female head of the family loses her employment, her family is condemned to hunger and extreme poverty.

President Hassan Rouhani's administration withdrew 1 billion euros from Iran's National Development Fund to deal with the negative economic impact of COVID-19 in the spring of 2020. However, it does not have any official plan to help Iranian women who have lost their jobs to COVID-19. Masoumeh Ebtekar, current vice president for Iran's Women and Family Affairs, has announced that in response to COVID-19, the Iranian government had set up training workshops for 12,000 Iranian women to prepare them for job markets. Although members of the business community have been warning that in some sectors, all women have lost their jobs, there has not been any financial assistance package approved for women. Iranian authorities do not have any official plan to help women who have been affected by the economic crisis caused by the global pandemic. Last March, Ebtekar told reporters that her office had begun corresponding with other government agencies to formulate a response. Since then, there has not been any update.

Many Iranian women interpret the government's lack of action as a sign that their job losses are permanent. When the economic recovery begins, the government is likely to prioritize Iranian men's return to employment at the expense of Iranian women — a prospect that for many hard-working Iranian women means living in permanent poverty.