The State Department also announced new sanctions on Iran including on the judge who purportedly ordered the execution of famed wrestler Navid Afkari. 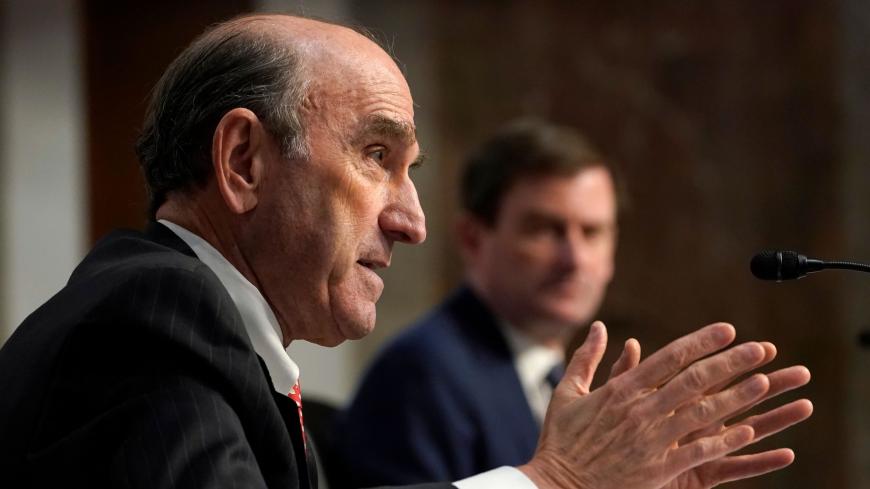 US special envoy for Iran and Venezuela Elliott Abrams testifies during a Senate Committee on Foreign Relations hearing on US policy in the Middle East on Capitol Hill in Washington, on Sept. 24, 2020. - SUSAN WALSH/POOL/AFP via Getty Images

US special envoy for Iran Elliott Abrams informed the committee at the hearing today of additional sanctions the United States placed on the Islamic Republic. He said the sanctions designate the judge who ordered the execution of famed wrestler Navid Afkari this month. The Iranian government accused Afkari of killing an Iranian government official and sentenced him to death. The judiciary gave conflicting reports on the official he supposedly killed, and the incident may have taken place during protests in the country.

“The regime brutally tortured and then shamefully executed champion wrestler Navid Afkari to send to its own people an unmistakable message of intimidation,” said Abrams on Afkari’s death.

Later in the day, the State Department issued a press release detailing the new sanctions on Iranian judges and legal entities for alleged human rights abuses. As per Abrams’ testimony, the department named Seyyed Mahmoud Sadati, whom US Secretary of State Mike Pompeo said was “involved in the appalling case of Navid Afkari.”

The sanctions designated other judges, courts and prisons in the country as well. Vakilabad prison, where US citizen Michael White was held until his release in March, was also listed. Judge Mohammad Soltani was likewise sanctioned for purportedly persecuting members of Iran’s Baha'i religious community.

“Soltani is responsible for sentencing Baha’is in Iran on dubious charges related to their exercise of freedom of expression or belief,” said Pompeo.

This summer, the Trump administration failed to get the UN Security Council to renew a weapons embargo on Iran that expires in October. Last week, Pompeo announced that he was triggering a “snapback” mechanism on Iran sanctions at the United Nations. The feature is part of the 2015 Iran nuclear deal. It allows parties to the agreement to reimpose UN sanctions on Iran if it fails to comply with the deal’s restrictions on Iran’s nuclear activity.

Other members of the UN Security Council, including European allies of the United States who are party to the nuclear deal, said the United States lacks the authority to trigger snapback sanctions because Trump withdrew from the deal in 2018. The United States entered into the landmark nuclear agreement under the previous administration of Barack Obama.

Abrams argued before the Senate that Iran is weaker as a result of the Trump administration’s actions, including sanctions and withdrawing from the nuclear deal. He said US objectives are to deny Iran the money it needs to conducts its “destabilizing” policies and to compel Iran to return to the negotiating table. These talks would address the nuclear program, Iranian proxies in the region and other issues.

“By any measure, we believe the Iranian regime is weaker today than when President Trump took office,” said Abrams. “The regime faces unprecedented and worsening economic and political crises.”

Abrams pointed to the recent designations of the Iran-backed Lebanese group Hezbollah as a terrorist organization by the United Kingdom, Germany and Argentina as an example of this success. He also said the administration’s “maximum pressure” campaign denied Iran tens of billions in funds and created hardship for Hezbollah and Hamas in Gaza. Hamas also has ties to Iran.

Senate Democrats hammered Abrams and Undersecretary for Political Affairs David Hale on US strategy toward Iran at the hearing, however. They argued Iran is stronger as a result of the US administration’s actions.

Sen. Bob Menendez of New Jersey, the ranking Democrat on the committee, cited recent comments from Gen. Kenneth "Frank" McKenzie that attacks on the US military by Iran’s proxy militias in Iraq increased from the first half of 2019 to the first half of 2020. McKenzie commands the US Central Command.

Sen. Chris Murphy of Connecticut said Iran is stronger in the region than it was when Obama left office, pointing to Iran’s relationship with Houthi forces in Yemen and Syrian President Bashar al-Assad.

The New England Democrat also said, “This argument that Iran is on the run, that they have less influence in the region because of our maximum pressure campaign, just does not pass the straight face test.”

Regarding US-Europe relations as they relate to Iran, Democratic Sen. Ben Cardin of Maryland said the Trump administration alienated European allies by pulling out of the 2015 nuclear deal. France, Germany and the United Kingdom repeated Sunday that the United States lacks the legal authority to initiate the snapback sanctions.

“The ‘maximum pressure’ campaign has been to isolate the United States,” said Cardin.

"They are absolutely against what the US did in pulling out of the Iran nuclear agreement,” added Cardin on the three European countries.

This line of thinking from Senate Democrats is not new. Democratic Sen. Chris Van Hollen, also of Maryland, said on Al-Monitor’s "On the Middle East" podcast this month that Trump has isolated the United States at the UN and moved Russia and China closer to Iran with his policies.

The discussions were not entirely tense. Sen. Mitt Romney of Utah, a Republican who has been critical of Trump, praised US support for the Lebanese military as a means of countering Hezbollah. Senators from both parties also voiced support for the United Arab Emirates-Israel normalization agreement brokered by the United States.

Senators also brought up reports that China is helping Saudi Arabia develop nuclear technology. Democrat Ed Markey of Massachusetts pressed Hale on the issue, but Hale said he could only talk to the senator about it in a classified setting. Van Hollen also told Al-Monitor that the United States should prohibit support for a Saudi civilian nuclear until it meets International Atomic Energy Association commitments.