The prisoner had defied pressure from intelligence authorities to withdraw his shocking statements after he blew the whistle on “medieval-style torture” of executed political prisoner Navid Afkari. 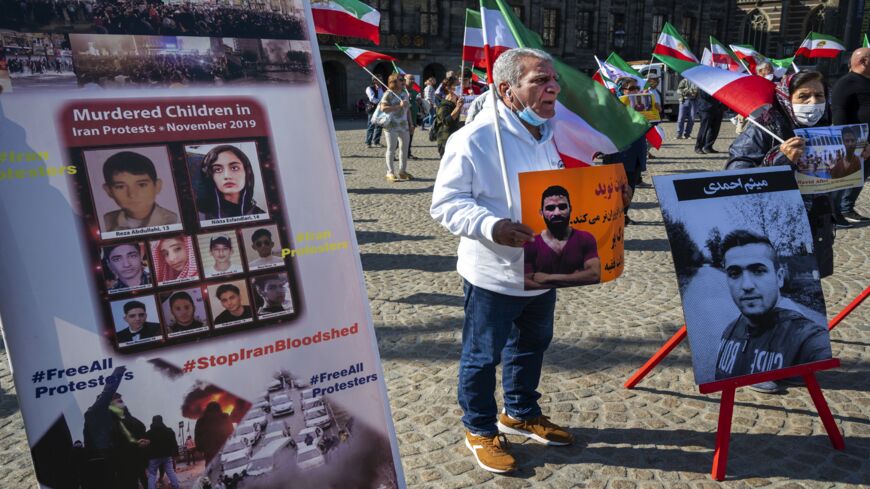 A man holds a portrait of Iranian wrestler Navid Afkari during a demonstration on the Dam Square in Amsterdam, the Netherlands, on Sept. 13, 2020, against his execution in the southern Iranian city of Shiraz and against the Iranian government. - EVERT ELZINGA/ANP/AFP via Getty Images

Iran’s judiciary confirmed the death of Shahin Naseri in its custody. Naseri was known for his horrifying account of torture against executed wrestler and political prisoner Navid Afkari.

On Thursday, two days after Naseri’s death was reported by activists, the head of Iran’s Prisons Organization issued a “special directive” for a probe into the case. In a separate statement circulated on Iranian media, authorities at Tehran’s Greater Prison announced that Naseri had died “45 minutes” after being transferred to the jail’s medical center. With no further details on the exact circumstances surrounding the victim’s death, the statement said a full explanation was pending the completion of forensic examinations.

However, according to accounts by other inmates at the same jail, the day before his death Naseri had been summoned by intelligence interrogators and taken to solitary confinement. “He was neither suicidal nor suffering from any medical condition,” the prisoners were quoted as saying by the Oslo-based Iran Human Rights Organization.

The center also reported that Naseri had intended to release a new statement on the anniversary of Afkari’s execution over the phone from inside the prison before his plan was detected by the guards.

Elsewhere, prominent lawyer Babak Paknia declared the prisoner had given him a phone call one day before his death and “pleaded for help.” The lawyer offered no further details on the prisoner’s request.

Praised by many Iranians for his “bravery,” Naseri was reportedly under mounting pressure from Iran’s Intelligence Ministry after he signed a witness account detailing extreme torture techniques against Afkari. According to Naseri’s testimony, plain-clothed interrogators repeatedly beat up Afkari with metal bars and made him confess to the murder of a security guard who had chased protesters during an anti-government rally in the city of Shiraz in 2018. Relying on those confessions, Iran’s judiciary handed Afkari the death penalty before executing him last September.

Naser’s case was last in a series of other unexplained deaths in Iranian jails during the past few months. Only last week, a Kurdish political activist was reportedly killed by authorities after being summoned in the northwestern city of Piranshahr; another man died earlier in September after being lashed at a central prison.

Naseri’s death also occurred days after Amnesty International sounded an alarm slamming Iranian authorities for their failure to bring to justice those responsible for deaths in Iranian custody.

Having documented at least 72 such cases since 2010, the rights organization stated it had received credible reports that those deaths “resulted from torture or other ill-treatment or the lethal use of firearms and tear gas.”