Iran president says 'no' to pre-election deal with Trump

Despite an official line of indifference toward US election results, Iranian authorities are closely monitoring the race from Tehran. 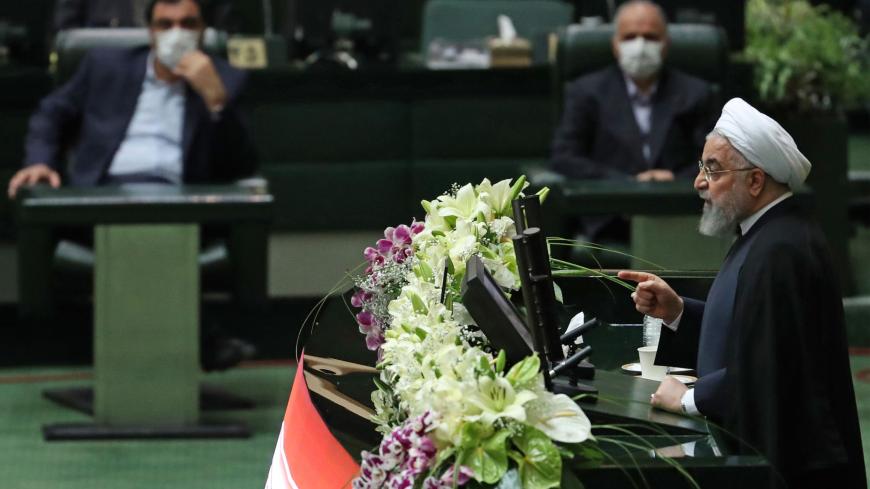 Iranian President Hassan Rouhani delivers a speech during the inaugural session of the new parliament following February elections, in Tehran on May 27, 2020. - AFP via Getty Images

​Mahmoud Vaezi, the most influential man in Iranian President Hassan Rouhani's entourage as well as his chief of staff, has reasserted the Islamic Republic’s stance that talks with US President Donald Trump's administration are not an option.

“We have to make sure that what he failed to achieve at home will not be covered by a foreign policy gain,” Vaezi said of Trump, adding that Iran “will look out in the remaining weeks until we pass this stage by.” The Rouhani aide was referring to the US president’s multiple offers for talks, which Tehran has so far turned down.

Vaezi also described as a “disaster” the first televised debate between Trump and his Democratic rival, Joe Biden. The trajectory of the ongoing presidential race in the United States, Vaezi claimed, is not in favor of the sitting president, “who is clueless about international politics.”

In his latest overtures, Trump has scrambled to tempt Iranians into a new agreement to replace the Iran nuclear deal — the Joint Comprehensive Plan of Action (JCPOA) — signed by the administration of his predecessor, former President Barack Obama. Following its departure from the accord in 2018, the Trump administration has been exercising its “maximum pressure” policy to bring the Iranian economy to its knees and force the government in Tehran into renegotiating the accord.

“They have reaped no fruit from their foreign policy, be it in Iran or elsewhere,” said Rouhani at a Cabinet meeting on Wednesday. From Rouhani’s view, the first US presidential debate revealed “how America is caught up in tough conditions,” including “the worst coronavirus pandemic management” and “the worst unemployment rate.”

Trump’s “maximum pressure” policy has only intensified in the run-up to the US vote, strengthening speculation that he is seeking a last-minute deal with Tehran to boost his election standing. Iranian officials, nevertheless, insist they are not pinning hopes on Nov. 3 and won’t rejoice over a Democratic or a Republican victory.

Yet the Democratic Party’s nominee has declared that if elected president, he will reinstate the JCPOA should Tehran resume its full compliance to the deal. One year after the United States departed from the JCPOA, Tehran initiated a phased breach in its commitments but has stated that a full return could take place in almost no time if the other signatories honor their side of the deal.

“If Trump is elected president, the door to negotiations will still remain open,” said veteran Iranian career diplomat Davoud Hermidas-Bavand. “However, a [victory by a Democrat] will better serve Iran’s interests,” he told the Reformist daily Shargh. Still, he argued that given the recent years’ regional developments after the JCPOA, a Democratic president in the Oval Office might seek revisions to the original nuclear deal.