US President Donald Trump’s latest effort to get Iran to renegotiate the nuclear deal he withdrew from was met with rejection in Tehran. 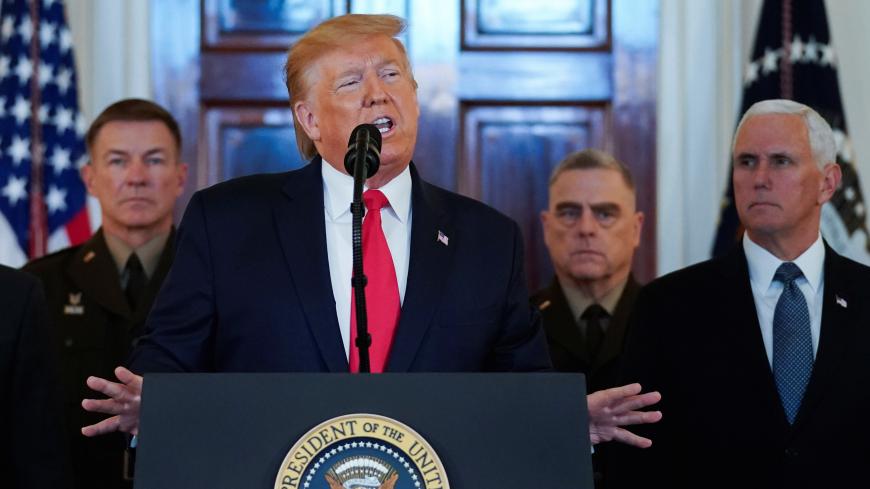 US President Donald Trump delivers a statement about Iran flanked by US Army Chief of Staff General James McConville, Chiarman of the Joint Chiefs of Staff Army General Mark Milley and Vice President Mike Pence in the Grand Foyer at the White House in Washington, US, Jan. 8, 2020. - REUTERS/Kevin Lamarque

Iran has shrugged off US President Donald Trump’s attempt to engage the Islamic Republic into new talks with his administration for a “big deal” by renegotiating the nuclear accord signed during the term of his predecessor, Barack Obama.

Trump made the offer after the two sides implemented their latest prisoner swap deal June 4. The US president expressed his gratitude to the Iranian side for releasing US Navy veteran Michael White in an exchange that also saw Iranian Dr. Majid Taheri freed from US custody.

"Don't wait until after US Election … I'm going to win. You'll make a better deal now!" Trump tweeted, once again suggesting that the Obama-era agreement, which he has slammed as the worst deal in US history and scrapped in 2018, needs to be restructured from scratch.

In response, Iran’s Foreign Minister Mohammad Javad Zarif, the architect of the original nuclear deal — known as the Joint Comprehensive Plan of Action (JCPOA) — made it clear that the Iranian position remains unchanged. Zarif threw the ball into Trump’s court to “fix” the accord by reinstating rather than renegotiating it. “We had a deal when you entered office. … Your advisors — most fired by now — made a dumb bet.” The top Iranian diplomat also stressed that the prisoner swap was a humanitarian deal achieved despite efforts by Trump’s “subordinates” to block it.

A hard-line media outlet run by Iran’s state-funded broadcaster attributed Trump’s move to his failure to address multiple crises at home and abroad, arguing that “he is now resorting to negotiations with Iran … which may come to his rescue.”

In the past two years, the US president has made similar overtures to Tehran, all dismissed by the Iranian leadership. Trump has also tried mediation, most notably through Japan’s Prime Minister Shinzo Abe, whose message delivered in Tehran was rejected by Iran’s Supreme Leader Ayatollah Ali Khamenei. On several occasions since, Khamenei has asserted that a breakthrough with the current US administration is impossible.

Nevertheless, a tweet from the Iranian supreme leader last month suggested that he might be rethinking his rigid policy. Khamenei lauded the “bravery” and “sacrifices” by a holy Shiite figure who “gave in to peace” with his enemies for the sake of “expediency.” The message has been interpreted as preparation for more “heroic flexibility,” a notion Khamenei introduced in 2013. It served as the green light for Iranian negotiators to engage with Western powers including the United States in talks that culminated in the JCPOA in 2015.

Iran’s Thursday confirmation of the American prisoner’s release ended speculation that had gained momentum after Iranian scientist Sirous Asgari was seen greeting his family at Tehran’s Imam Khomeini International Airport. Both Iran and the United States have denied that Asgari’s release had anything to do with that of Michael White.

Iran’s Foreign Ministry spokesman Abbas Mousavi insisted that White was flown home in exchange for Taheri. The Iranian official also appeared to suggest that White’s release was not a swap and occurred only after he “managed to obtain the consent of the private plaintiffs … And as for other charges, he was treated with Islamic compassion,” a term recurrently used by Iranian officials in reference to parole granted to some prisoners.

The explanation was also reminiscent of the Iranian judiciary’s statements following the release last June of Lebanese national and US green card holder Nizar Zakka. Back in Beirut, however, Zakka infuriated Iranian authorities by denying their side of the story and recounting mistreatment he said he had suffered while serving time in Iran.