In his first public speech on the US presidential election, Iran’s supreme leader said victory by a Democratic or a Republican candidate will not trigger any change of policy in Tehran. 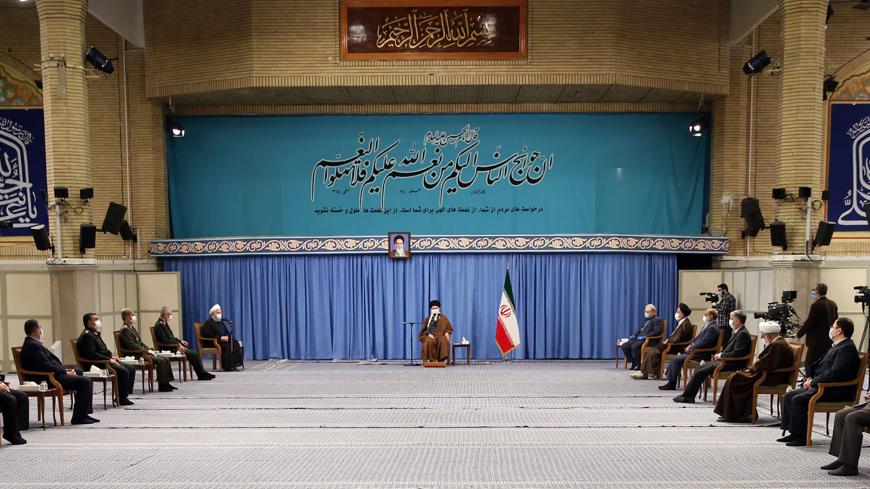 A handout picture provided by the office of Iran's Supreme Leader Ayatollah Ali Khamenei on Oct. 24, 2020, shows him wearing a protective face mask as he gives a speech in the capital Tehran during a meeting of the national staff to discuss the issue of the novel coronavirus pandemic crisis. - KHAMENEI.IR/AFP via Getty Images

Supreme Leader Ayatollah Ali Khamenei defended his country’s overall stance toward the United States as a “calculated” policy that will not change based on “who enters or leaves” the Oval Office. While admitting that “things may happen” under certain US presidents, Khamenei said, “This does not concern the Islamic Republic.”

The Iranian supreme leader made the televised comments on the anniversary of the 1979 takeover of the former US Embassy in Tehran that lead to a hostage crisis lasting for 444 days. The episode prompted Washington to cut off its diplomatic ties with Tehran and triggered a cycle of hostilities between the two governments that has only worsened during President Donald Trump’s term in office.

While some of the revolutionary students involved in the embassy attack have regretted the takeover in hindsight, Khamenei justified it as an act of “absolute rationality” against American influence. “The outcome of US presence anywhere in the world has been nothing but insecurity, destruction and civil war,” he said.

The Trump administration’s “maximum pressure” policy against the Islamic Republic and the economic implications for its ordinary public has made the US election a topic of heated debate inside Iran. Khamenei expressed “wonder” at the US campaign, in which both candidates have already raised allegations of fraud and revealed the “ugly face of liberal democracy.” The Iranian leader once again predicted America’s "collapse” and “disintegration” regardless of who wins the election.

While covering the latest from the US vote, Iran’s hard-line media outlets have been closely focused on a “divided America” and the possibility of post-election unrest in which a possible refusal by the Trump camp to concede defeat could spark deadly street battles among armed supporters.

One day before Khamenei’s speech, Foreign Minister Mohammad Javad Zarif reasserted Iran’s official line of disinterestedness in the US election. Yet he found statements from the Biden camp “more promising.” Zarif did not clarify further. But during his campaign rallies, the Democratic candidate has expressed willingness to reinstate the nuclear deal which his Republican rival departed from in 2018.

Still, hard-liners in Iran do not seem to be ready to make it easy for Zarif and President Hassan Rouhani’s government in general. This week, the conservative parliament started work on legislation that obliges the government to raise Iran’s uranium enrichment level to 20%, way above the 3.67% threshold set by the accord. Even in the case of a Biden victory, that breach could further complicate any rapprochement with the United States, as the Democratic contender has conditioned talks with the Iranians upon their full compliance with the deal.

And the lawmakers behind the legislation have not shied away from sending their clear messages to Rouhani and his camp. “Tying domestic affairs to … the US election results is a big and unforgivable treason,” warned ultraconservative deputy parliament speaker Amir Hossein Ghazizdeh Hashemi. “The enemy is the enemy, be it a Donald or a Joe.”