President Hassan Rouhani said Tehran could ease tensions with the new US administration, only one day after Iran’s supreme leader expressed disappointment at negotiations. 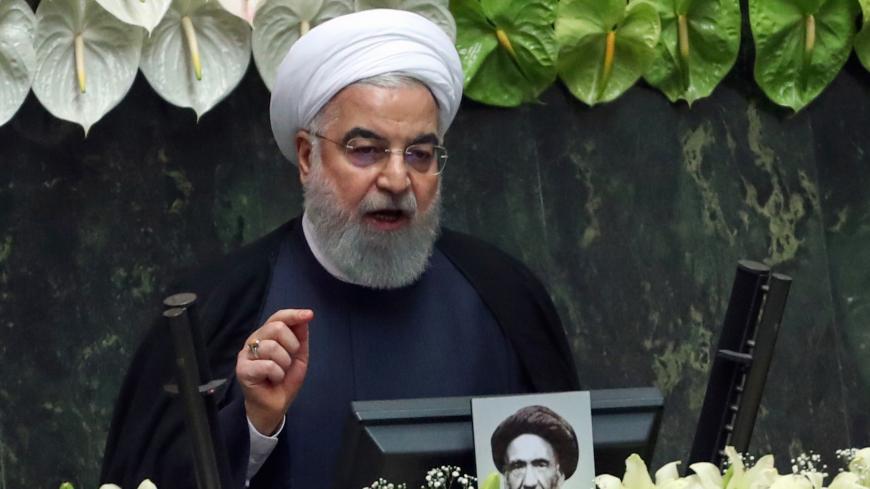 Iranian President Hassan Rouhani delivers a speech during the inaugural session of the new parliament following February elections, in Tehran, Iran, on May 27, 2020. - AFP via Getty Images

“Thank God, the American people and the people of our region got rid of his evil [rule],” Iranian President Hassan Rouhani said in an expression of relief on the departure of his American counterpart, Donald Trump, from the White House in January. In his scathing diatribe broadcast on state television Nov. 25, Rouhani blamed Trump’s defeat in part on his “wrong policies” and “racist conduct."

“The very worst of crimes in America’s history were committed by this man against independent nations, especially Iranians,” Rouhani added, accusing Trump of “terrorist” and “savage” acts against Iran during the coronavirus pandemic.

Prior to the US elections, Rouhani and his administration adhered to the official line that Iran recognizes no difference between a Trump reelection or a victory by Democrat Joe Biden. However, Rouhani declared that he believes “a solution to the problem is easy” if the Biden administration shares the “resolve to de-escalate tensions and respect international obligations.”

Rouhani was referring to the 2015 nuclear deal Trump withdrew from but that President-elect Biden is expected to reinstate. “Both Iran and the United States can decide to return to where they were prior to Jan. 20, 2017” (the Trump presidency’s first day) when Iran and the other signatories were carrying out the multilateral accord. “The next stages could come afterward,” Rouhani said, hinting at the possibility of future US-Iran talks.

The Iranian president’s comments drew a clear line from a speech by Supreme Leader Ayatollah Ali Khamenei the day before, when he sounded all but disappointed with the nuclear “negotiations that led us nowhere.” Khamenei suggested “neutralizing the sanctions” through “perseverance and initiatives” could work more effectively than negotiations. “We cannot trust the foreigners and pin hopes on relief from their side,” he added.

Although the Rouhani government would have never been authorized to ink the nuclear deal without Khamenei’s approval, the supreme leader’s fervent loyalists, who take pride in describing themselves as “the concerned,” have from the outset been harsh critics of the accord in general, and negotiations with Washington in particular.

Nonetheless, Rouhani appeared to be inattentive to those “concerns” as he is counting the days until the post-Trump era. This will give Rouhani only a few months as president to salvage a dying deal he invested on as his key achievement, as he cannot run again in Iran's presidential elections next year.

The moderate president is now expecting the Biden team to “condemn” Trump’s approach and make up for his “mistakes.” Yet in a shift from previous statements, and in an attempt to perhaps render de-escalation even smoother, Rouhani did not demand any compensation from the incoming US administration for the economic damages inflicted upon Iran under Trump’s “maximum pressure” policy.