A third wave of coronavirus infections is bringing Iran's medical infrastructure to its knees as the country’s health minister points to a lack of financial support. 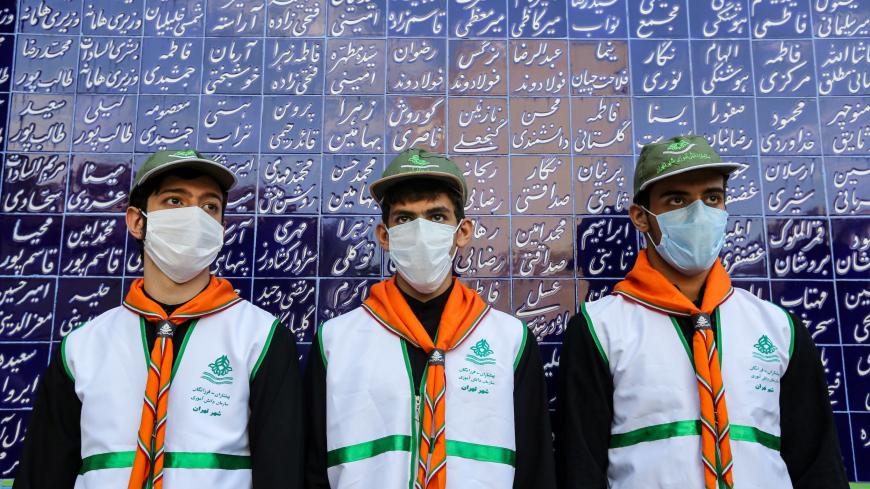 Members of a student organization, mask-clad due to the COVID-19 pandemic, stand before a wall showing the names of donors at Nojavanan school in Iran's capital Tehran on the first day of the school's re-opening on Sept. 5, 2020. - ATTA KENARE/AFP via Getty Images

Iran announced another 184 deaths caused by the coronavirus on Wednesday, raising its total to close to 25,000. The number of confirmed cases is now around 433,000.

According to health officials, the country has been hit with a “third wave” of the pandemic, a period they say could prove even more disastrous than the previous peaks. Hospitals in many cities, including the capital Tehran, have reached capacity. Local officials in the central city of Isfahan are lamenting a “situation beyond critical.” A video went viral earlier this week showing a number of people at a hospital in the western city of Yasouj loudly arguing with fatigued medical staff, who had to turn them away due to a lack of beds.

Those estimates have prompted the ministers of health and interior to sound the alarm on an “extremely worrisome situation.” The description marks a shift from the narrative promoted by the government of President Hassan Rouhani, which has been under fire over its confusing and chaotic handling of the coronavirus crisis. A long list of flawed policies has been growing: a cover-up of the outbreak in the early days, refusal to place lockdowns on epicenters, failure to impose stringent measures, a delayed introduction of protective masks and a premature resumption of normal business.

But perhaps the most contentious decision was made on Sept. 5. Ignoring persistent pleas from medical experts and worried parents, the government went ahead with reopening schools nationwide. At least two provinces have now reported alarming figures of schoolchildren contracting the virus.

Massive hoarding of masks, disinfectant and medical supplies has also worried the Iranian public that prevalent corruption is hampering a proper response to the pandemic. Early in the outbreak, the cash-strapped and sanctions-hit government had to tap its National Development Fund. Access to the fund is reserved for Supreme Leader Ayatollah Khamenei, who after 11 days of deliberations, approved of the government request for 1 billion euros to be injected into pandemic management programs.

Seven months on, Health Minister Saeed Namaki is now complaining that despite the supreme leader’s directive, his ministry has received a “tiny portion” of the promised amount. “We cannot curb a pandemic by begging,” Namaki said, wondering “if there is currently any other emergency to be prioritized over the coronavirus.” The minister did not specify which official or institution he thinks is blocking the aid package.