Iranian officials are expressing rage at a provocative rerunning of cartoon portrayals of Islam’s Prophet Muhammad, but have refrained from calling for retaliation or issuing death fatwas. 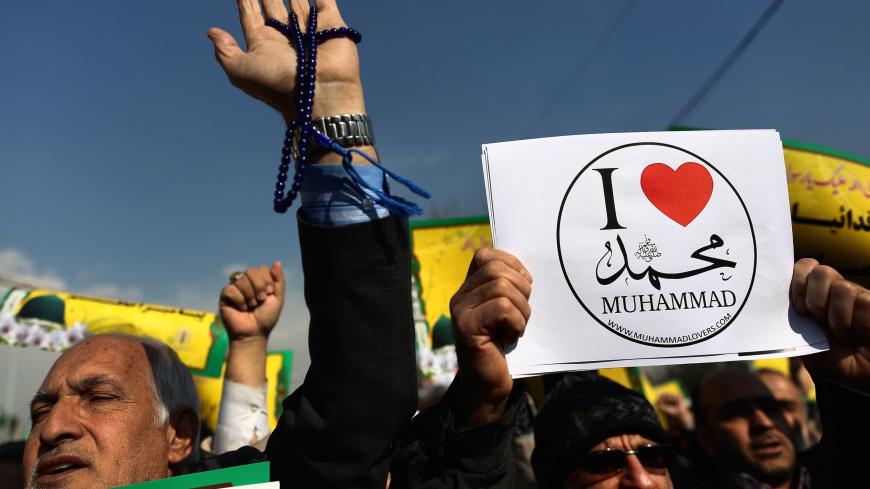 Iranian worshippers demonstrate after the weekly Friday prayers on Jan. 23, 2015, in Tehran to protest a cartoon of the Prophet Muhammad that was published by the French satirical magazine Charlie Hebdo in an edition issued a week after 12 people were killed by Islamist gunmen at its Paris offices. - BEHROUZ MEHRI/AFP via Getty Images

Iran’s Foreign Minister Mohammad Javad Zarif strongly criticized a reprinting earlier this month of some controversial cartoons by the French satirical magazine Charlie Hebdo. Many Muslims across the world find the sketches depicting the Islamic community’s most revered figure, the Prophet Muhammad, sacrilegious.

Zarif’s tweet also criticized French President Emmanuel Macron, who has refused to condemn the publication, saying he is not in a position to pass judgement on the magazine’s editorial decisions. “Freedom of expression or institutionalized hypocrisy?” the Iranian foreign minister asked the French leader, using his signature sarcasm.

Charlie Hebdo reran the cartoons ahead of long-awaited proceedings that began last week against 13 defendants accused of complicity in the 2015 attack on the magazine’s office in Paris. The shooting left 17 people dead, including 12 magazine staff members and the three gunmen behind it.

Earlier on Tuesday, Iran’s Supreme Leader Ayatollah Ali Khamenei issued a statement calling the magazine’s reprint of the cartoons “desecration” and “yet another sign” of the enmity of “Western political and cultural institutions” against Islam and its followers. Khamenei targeted the French leadership, saying defense for the magazine on freedom of speech grounds was “absolutely unacceptable."

In Khamenei’s view, the publication's move fell within a larger scheme by the United States and Israel against Muslims. He urged the latter to stay vigilant and never ignore Western leaders’ “hostilities." The statement fit the style of Khamenei, a Shiite cleric who habitually addresses the wider Islamic world and asserts his self-proclaimed position as leader of the global Muslim community.

Unsurprisingly, Khamenei’s statement filled newsstands in Iran, where newspapers remain under strict supervision by the theocratic apparatus, entirely controlled by the supreme leader. As a rule, all media outlets running Khamenei's speeches are handed official versions, against which critical commentary is a well established red line.

Despite slamming the sketches as “a big and unforgivable sin,” Khamenei fell short of issuing a fatwa of death, marking a shift from the his predecessor's reactions toward similar controversies. Back in 1989, Ayatollah Ruhollah Khomeini, who led a revolution against the Iranian monarchy and founded the Islamic Republic, formally issued a death fatwa against British-Indian author Salman Rushdie.

The fatwa, which called on all Muslims to execute Rushdie if they get the chance, came after Rushdie’s magical realism novel, "The Satanic Verses," sparked outrage across the Muslim world. While Rushdie has not been harmed, the fatwa is still in place and has been openly defended by Khamenei as “unchangeable."