Israel retaliates with airstrikes as Palestinian armed groups in Gaza reject normalization and weigh their next moves. 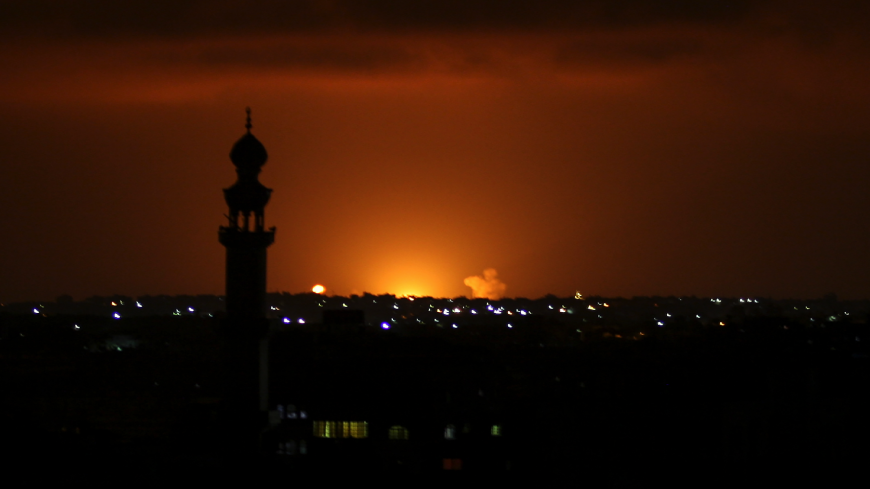 Smoke and flames are seen following an Israeli airstrike in the Khan Yunis town of the southern Gaza Strip on September 16, 2020. Israel bombed sites in the Gaza Strip early Wednesday, Palestinian security sources said, after rocket fire from the Hamas-controlled territory into Israel the previous evening. The retaliatory attack came the morning after the United Arab Emirates and Bahrain signed a landmark accord in Washington establishing diplomatic relations with the Jewish state. - SAID KHATIB/AFP via Getty Images

While Bahrain and the United Arab Emirates (UAE) were signing agreements to normalize relations with Israel in Washington Sept. 15, Palestinian armed factions in the Gaza Strip fired long-range rockets over southern Israeli cities, wounding 13 Israelis, one of whom suffered serious injuries, and causing material damage. No faction claimed responsibility for the rocket attack.

A few hours after the incident, in the early hours of Sept. 16, the Israeli army launched 10 airstrikes on the Gaza Strip, targeting a weapons and explosives factory and a complex used by Hamas for training and rocket testing.

On the same day, Sept. 16, the Israelis accused, once again, Hamas of being responsible for what has been happening in Gaza.

In a tweet on the same day, Izz al-Din al-Qassam Brigades, Hamas’ military wing, said they will respond in kind to any attack on the part of Israel.

The Islamic Jihad movement, for its part, announced that the resistance fired a salvo of rockets at Israel, but there were no casualties or injuries.

Hamas spokesman Hazem Qassem, speaking to Al-Monitor, chose his words carefully in supporting the action without claiming Hamas' potential responsibility, saying, “The Palestinian resistance is capable of keeping the Palestinian issue at the forefront of events [in the region] at all times, despite some regional attempts to undermine it. The rocket fire came as a response to the Israeli air bombing of resistance sites. Our response was swift and accurate to deter the Israeli aggression on Gaza. We will not change the rules of battle or impose new equations. The resistance factions, namely Hamas, will continue to face the deal of the century (the US Middle East peace plan) and its repercussions, and the [Israeli] annexation plan, with all means possible.”

Meanwhile, Israeli Prime Minister Benjamin Netanyahu said in a Sept. 16 statement that Gaza’s rockets aimed to disrupt the peace process between Israel and the Gulf. Israeli Defense Minister Benny Gantz warned Sept. 16 that “if Hamas continues firing, last night’s retaliation will just be the tip of the iceberg,” referring to Israeli reprisal raids in the coastal enclave following the firing of a salvo of rockets.

Islamic Jihad Secretary-General Ziyad Al-Nakhaleh said in an interview with Al-Mayadeen TV on Sept. 16 that the “resistance fired rockets in response to the humiliating scene in Washington,” referring to the UAE and Bahrain’s signing of normalization deals with Israel.

The fact that no faction claimed responsibility for the firing of rockets into southern Israel is an unusual occurrence. It seems that at least the Palestinian factions seem to be united in sending one message to the signatories in Washington: that the real decision about Palestine comes from within the Palestinian territories, that these agreements do not mean that Israel’s occupation will not come to an end, and that Gaza will eventually be free of the blockade. The Palestinian Authority, also in an unusual move, did not condemn the rocket firing, which suggests that it tacitly approved them.

Saeed Bisharat, editor-in-chief of the Hodhod news network for Israeli Affairs, told Al-Monitor, “The escalation ended with an Israeli response to the Gaza rockets. I do not think Israel wants to further escalate the situation. The threats made by the Israeli defense minister and some army leaders are merely for propaganda at home.”

“Israel, however, could ride the wave of normalizing ties to start an aggression on Gaza, but the regional powers supporting the Palestinian resistance, i.e., Iran and Turkey, would not allow it. Should an escalation happen in the future between Hamas and Israel, I don’t think it will turn into a full-fledged open war. Israel would respond to Hamas’ strikes with targeted attacks,” Bisharat said.

Wissam Afifa, director of Al-Aqsa TV, which is close to Hamas, told Al-Monitor, “The last escalation round in Gaza has pushed the Palestinian factions to be wary of the imminent danger from the emerging alliances and partnerships in the region following the Washington agreements. The armed factions believe that they would be the first victims to such agreements, as they include military and security items targeting them. The upcoming period could also witness intelligence cooperation between these countries against the resistance.”

“The coming period will also witness increased media synchronization between Israel and its Gulf partners in such a way to condone any Israeli aggression on the Palestinians, who would be blamed for it, under the pretext of the need to dry up the sources of arms and funding for the military resistance,” he added.

The Gaza rocket-firing came as a surprise for several reasons, mainly because it targeted an area outside the Gaza envelope and reached the coastal cities of Ashdod and Ashkelon, as rockets have been previously fired at open agricultural lands.

Rockets were also fired a few days after the latest escalation ended Sept. 1 through Qatari mediation. Israel was careful not to violently respond but to merely hit targets inside Gaza, seemingly because it did not want to disrupt the peace celebrations with the UAE and Bahrain.

Mohammed al-Brim Abu Mujahid, spokesman for the Popular Resistance Committees, told Al-Monitor, “Firing the rockets at Israel was a crucial message and a significant response to the Arab normalization of ties with Israel. We also sent a message that we will keep responding in kind. We will respond to bombing with bombing. This will not change.”

“We, however, fear that the UAE-Bahrain-US alliance would carry security implications affecting the Palestinian resistance. But we are ready for the worst-case scenario. Should we need to send other messages, we will. The resistance is ready for all plausible scenarios, including any foolish Israeli military venture in Gaza,” Abu Mujahid said.