Israel's political impasse is expected to affect the Palestinians' situation in the Gaza Strip, and Israeli intelligence believes new military confrontations will erupt as the security and humanitarian situation there continues to deteriorate. 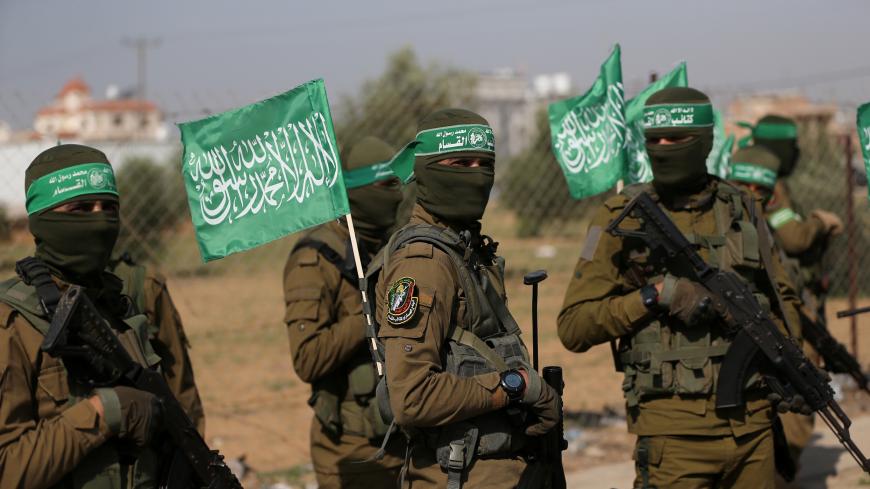 It took only two weeks for the first exchange of fire of 2020 between Israel and the Gaza Strip.

The confrontation came Jan. 15, just one day after the Israel Defense Forces released its annual intelligence assessment, which — to no one's surprise — did not rule out the potential for short rounds of confrontation with the Hamas-run Gaza Strip.

Israeli aircraft bombed Hamas targets the evening of Jan. 15, after four rockets were launched from Gaza toward settlements in southern Israel. No Palestinian or Israeli casualties were recorded.

In response to Israel's retaliation, the so-called night confusion units of the Palestinian resistance factions resumed their activities Jan. 19 near the eastern border. Several Palestinians launched dozens of explosive devices and booby-trapped balloons toward the Israeli army and settlements there.

The confusion units consist of hundreds of Palestinians who head to the border areas in the first hours of the night, shooting firecrackers, beating drums, playing national songs on speakers and honking their car horns to disturb nearby Israeli soldiers and settlers. (The units had halted their activities in March when Egypt asked Israel to improve Gaza living conditions and implement the understandings between Hamas and Israel in October 2018 to ease the Gaza blockade.)

Also possibly adding to the current tension, an Egyptian security delegation, whose arrival date in Gaza was announced to be Jan. 6, failed to show. Some observers said this was due to Egypt's anger after Hamas leader Ismail Haniyeh visited Iran that day, though the Hamas politburo denied any hostility.

Taher al-Nono, Haniyeh’s media adviser, also said in a Jan. 19 press statement that there is no tension. He stressed that the relationship between Hamas and Egypt is stable and that they continue to coordinate on all issues.

But as for Hamas and Israel, tension rose even more Jan. 21, as the Israeli army shot dead three Palestinians it said threw an explosive device at Israeli forces and tried to cross the border near the Kissufim settlement. Palestinian factions in Gaza have yet to comment on the incident, which is adding more fuel to the fire there.

Mohammed al-Brim Abu Mujahid, a spokesman for the Popular Resistance Committees, told Al-Monitor, “The resistance is monitoring the security situation in Gaza and along its borders, and will not stop pressuring Israel until it complies with what is required of it to ease the siege. Should the Israeli responses escalate by bombing the military resistance sites, we may resort to activating other options."

He added, "We will be ready to face any Israeli attempt to change the rules of engagement. The Israeli internal [political] crisis may push the Israeli government toward a military escalation against Gaza, but the resistance is ready to face the worst.”

Israeli military circles informed the Israeli Kan channel Jan. 15 that Palestinian Islamic Jihad militants were responsible for launching the rockets that day, although none of the Palestinian factions claimed responsibility. Yet, Israel bombed Hamas posts in response, because Israel believes that, as Hamas controls Gaza, it is responsible for any action there, regardless of which organizations carries it out.

Hassan Abdo, a political analyst close to the Islamic Jihad, told Al-Monitor that the recent escalation is linked in part "to the tightening of the Israeli blockade on Gaza, which has revived the lack of calm in Gaza that had prevailed since the start of the marches of return in March 2018. Israel is trying to portray the Islamic Jihad as being in a volatile, uncontrolled state ... which, in Israel's view, requires its deterrence, and this is not true."

He said the fact that Israeli elections are only 40 days away seems to back the hypothesis that some Israelis favor "escalating against Gaza for electoral reasons, without a full-fledged war.”

Mahmoud Mardawi, a member of Hamas’ National Relations Office, told Al-Monitor, "As long as Israel violates its pledges to Egypt, Qatar and the United Nations regarding the understandings of October 2018, the resistance will resort to escalation once again. Israel may have been slow to implement the understandings on the eve of its elections in March, even if it led to escalation with Gaza, but the resistance will not allow Gaza to be an arena for Israelis competing in the elections, and it will continue to use its militant tools."

Israeli Channel 13 announced Jan. 20 that Israel had warned Hamas about the continued launch of balloons from Gaza, amid Israeli security concerns that Hamas might disrupt the Holocaust Remembrance summit Jan. 23 in Jerusalem. More than 40 senior world leaders were expected to participate.

On Jan. 19, Israeli Channel 12 said Israel threatened Hamas through a third party, which the news organization did not identify; Israel was reported to have warned that if incendiary and explosive balloons continue to be fired, it will not hesitate to stop them, even if this leads to a military escalation.

Mardawi, however, said incendiary balloons "are a form of the Palestinian struggle."

Saeed Bisharat, editor-in-chief of Hodhod news network for Israeli affairs, told Al-Monitor, “I don't believe there will be a major military escalation between Hamas and Israel. The latter is now looking for security, calm at any cost, and Hamas knows the internal Israeli [political] impasse and so is pressuring it to get what it wants, without Israel pushing for a harsh response that could lead to an exaggerated escalation. This action/reaction situation is expected to remain the same for now but no one knows where it could lead.”

The tension in Gaza could increase due to another humanitarian crisis that recently emerged. An association of fuel companies in Gaza announced Jan, 20 that no Israeli or Egyptian natural gas had entered for 10 days, which had not happened for three years. There is no gas for citizens, bakeries, factories, farms and hospitals.

Yedioth Ahronoth newspaper reported Jan. 16 that Egypt was so angry at Hamas over Haniyeh’s visit to Iran that it imposed sanctions by raising the prices of goods exported to Gaza and new fees on those leaving Gaza through the Rafah crossing. However, Khalil al-Hayya, a member of Hamas' political bureau, said at a Jan. 21 press conference in Gaza that the gas crisis has nothing to do with the Hamas-Egypt relationship, but rather that the Egyptian decision was made for purely commercial reasons.

On Jan. 16, Adnan Abu Hasna, media adviser for the United Nations Relief and Works Agency for Palestine Refugees, said the Gaza Strip has completely collapsed at all levels. He pointed to a 2018 UN report that predicted Gaza would not be viable by 2020.

All of this indicates that the humanitarian situation in Gaza could deteriorate even further, which could lead to increased security tension amid fears that any escalation could turn into an open confrontation with Israel. The Israeli government may try to use Palestinians' desperation as leverage to achieve calm for its elections — but Hamas could always opt for using greater military force, one of whose effects might be to cause the Israeli right to lose the elections.