Ankara’s bid to warm the pandemic-hit economy has backfired, forcing a policy reversal that threatens to aggravate popular grievances and heighten political risks for Erdogan. 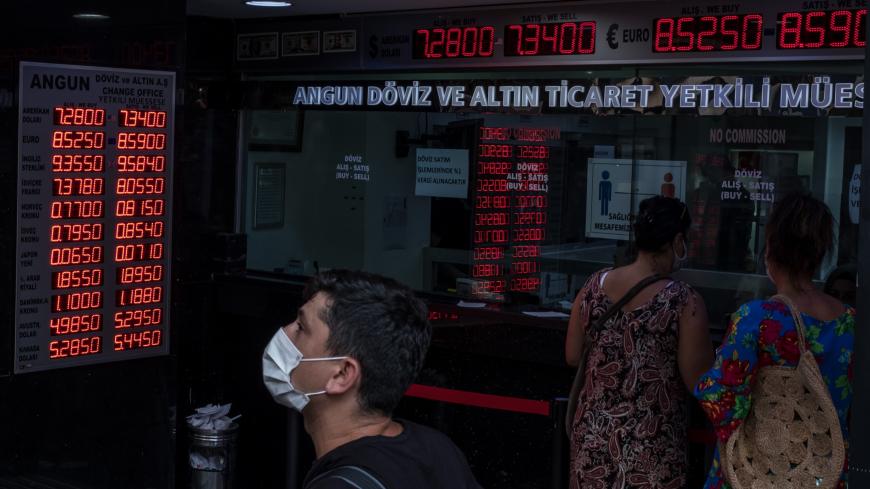 People wait to exchange money at a currency exchange shop on July 7, 2020 in Istanbul, Turkey. The Turkish lira continued to slide after posting record lows against the US dollar during the week. - Chris McGrath/Getty Images

Unrelenting inflation and the uncontrollable slump of the Turkish lira have forced Ankara to start cooling the economy, only two months after it spurred a loan bonanza to revive consumer demand and breathe life into pandemic-ravaged businesses. The abrupt reversal heightens political risks for President Recep Tayyip Erdogan as he faces growing popular frustration over economic woes that have only worsened since a severe currency shock in 2018.

The lira took another dramatic nosedive Aug. 6-7, forcing the central bank to begin curbing liquidity and heralding the end of the fledgling attempt to warm up the economy.

In early June, Ankara had pushed for a loan expansion that sent consumers on a spending spree after the downturn caused by the coronavirus pandemic. Easy access to cheapened, long-term credit resuscitated the sales of homes, cars and durable goods, which had plummeted in the March-May period. Credit was available even for domestic tourism. Public banks, which are directly under government control and dominate more than a third of Turkey’s banking sector, drove the loan expansion, but private lenders, including those of foreign ownership, were also pressured to follow suit. The rebounding domestic demand energized the industry as well and economic expectations seemed to improve.

In less than two months, however, side effects began to show — an unremitting consumer inflation and a continued currency slump despite costly central bank efforts to control it.

Consumer inflation firmed in the region of 12%-13% in June and July, fanning a flight from lira deposits, whose yields remained below the inflation rate. Savers increasingly saw hard currency as a safe haven to preserve the value of their money, with 53% of savings now kept in foreign exchange.

At the same time, the flight of foreign investors intensified as the central bank’s efforts to control foreign exchange prices began to erode even the funds it had borrowed through currency swaps after depleting its foreign reserves.

This all culminated in the last week’s ordeal of the lira, which, in a matter of days, tumbled to 7.3 against the dollar from the region of 6.85, where Ankara had managed to keep it for some time.

The central bank quickly announced measures that would cool the economy, telling banks that it was tightening liquidity. The move is meant to disable a pressure factor on the lira by curbing foreign exchange demand from industrialists and importers instead of directly raising interest rates to rein in dollarization. As a result, banks have been forced to raise both interest rates on loans and yields on lira deposits.

This marks the onset of a cooling period in the economy, with demand for consumer loans on a fast decline. How long this period will last and how sharp the descent will be is unclear. Yet the fact that the attempt to warm up the economy went awry in only two months is a grave sign of how fragile the Turkish economy has become.

The policy reversal upends Erdogan’s political calculations as well, as the effort to boost the economy was meant to consolidate his voter base as millions have been left out of work and grown poorer since the pandemic struck. The new cooling period is coupled with fresh troubles stemming from the flare-up in COVID-19 infections, auguring sleepless nights for Erdogan and his party.

The Turkish economy had experienced a warming in the first two months of the year before the coronavirus arrived in March to fuel a downturn. After the loan-driven effort to boost the economy, the new cooling period comes as a fourth major fluctuation in a year. The role of the pandemic is obvious, but such sharp fluctuations have more to do with the government’s narrowing wiggle room in managing the economy and its growing fragility.

The cycle of ups and downs goes back to 2018, with no lasting period of stability since. A crucial factor behind the fragility is the major outflow of foreign capital from Turkey, which owes prominently to waning foreign confidence in Erdogan’s government.

The executive presidency system, which took effect after the June 2018 elections, accorded “one-man” powers to Erdogan, while weakening parliament and the judiciary. Erdogan placed his son-in-law at the helm of the Treasury and Finance Ministry and, drawing on his new powers, effectively eradicated the autonomy of the central bank.

The flight of foreign capital is akin to partial paralysis for the Turkish economy, which relies heavily on external funds to grow and is saddled with a foreign debt stock amounting to nearly 60% of the country’s gross domestic product. In a striking sign of how Turkey has decoupled from peer emerging economies, its risk premium — reflected in credit default swaps — has climbed to the region of 550-600 basis points since the tumult earlier this month, almost double the risk premium of South Africa, which trails closest behind.

Economic floundering has already given Erdogan a taste of how his political fortunes could suffer. In spring 2019, his party lost local elections in major cities across the country, including Istanbul, where he forced a rerun of the vote, after the currency turmoil in the summer of 2018 caused the economy to shrink.

Following the routing, the government scrambled to take full control over the central bank and tried to warm the economy through rate cuts despite unruly inflation. Moreover, it sought to control foreign exchange prices. The central bank used its reserves to funnel foreign exchange to the market via the “back door,” that is public banks. The reserves dried up so badly that the central bank had to plug the gap through currency swaps of nearly $60 billion, including $16 billion from Qatar and China and the rest from local banks.

The deteriorating reserves drew international scrutiny and warnings and further spurred the flight of foreign investors, which ultimately forced Ankara into a policy shift.

With the option of warming the economy wasted, Erdogan is now facing a tough question: How to assuage the electorate's grievances, which are bound to grow in the new cooling period? Having exhausted a good deal of religious and nationalist stunts, his response could be more crucial than ever.