How much does Erdogan’s 'coercive diplomacy' benefit Turkey? 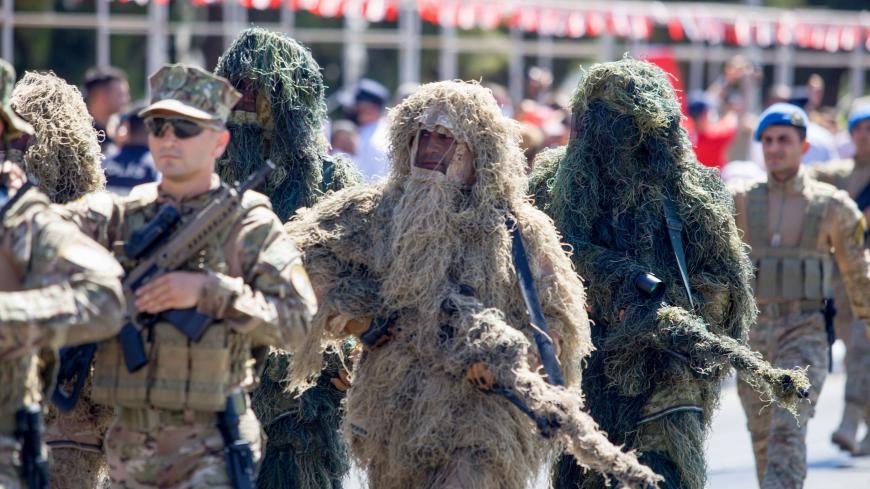 Turkish troops parade in the northern part of Nicosia, the capital of the self-proclaimed Turkish Republic of Northern Cyprus, on July 20, 2020, to mark the 46th anniversary of the Turkish invasion of northern Cyprus in 1974. - BIROL BEBEK/AFP via Getty Images

President Recep Tayyip Erdogan favors hard talk in his international dealing. His approach is usually laced with insults and military threats. He abhors compromise and looks on traditional diplomacy with disdain.

Under his rule, Turkey has become a disruptive international player that has few friends or allies of any significance left. It has left Ankara with more enemies and detractors than at any time since the founding of the republic nearly a century ago.

This isolation, however, is of no consequence for Erdogan, who frequently expresses his readiness to use Turkey’s military might as a first choice to resolve problems rather than the diplomatic track.

Erdogan has also been true to his word, ordering three military incursions into Syria as well as embroiling Ankara in the Libyan civil war.

Ankara is now flexing its military muscles in the eastern Mediterranean to disrupt the joint energy exploration activities of Greece, Cyprus, Egypt and Israel. It says these countries — who are backed by France and the United States, among others — are disregarding Turkey’s rights in the region as well as the rights of Turkish Cypriots.

Meanwhile, the anti-Turkish coalition this dispute has spawned is growing, with hardly any country paying attention to the merits of Ankara’s arguments.

Few Turks dispute Ankara’s right to defend its interests in the Mediterranean, especially if the country’s traditional rival Greece is involved. Nevertheless, many are concerned that military bravado will ultimately prove to be counterproductive.

There is also concern that Turkey will be sucked into a conflict that involves not just regional but also outside powers. The fear is that a hot confrontation in the Mediterranean could starkly demonstrate how politically isolated Erdogan’s Turkey has become.

Many Turkish analysts believe that diplomacy is the only rational way to move forward in this crisis.

Turkey may appear at first glance to have secured some benefits from Erdogan’s hard-line approach to foreign policy, which Saban Kardas from the German Marshall Fund defines as “coercive diplomacy backed by military instruments.” For example, Turkey controls parts of Syrian territory today, along its 911-kilometer (566-mile) border with the country, as a result of its three major military incursions since August 2016.

Nevertheless, it failed to achieve its main objectives, the first and foremost of which was the eradication of the US-backed People's Protection Units (YPG) from northern Syria. Turkey considers the Syrian Kurdish group a terrorist organization that threatens its security.

US President Donald Trump facilitated Ankara’s Operation Olive Branch against the YPG in northeastern Syria in 2019 by pulling back US forces from the Turkish border. But the US military did not leave Syria, as Ankara expected, and left the bases it evacuated to Russia instead of handing them over to Turkey.

Meanwhile, the YPG continues to consolidate its position with the US backing east of the Euphrates River in regions that are inaccessible to Turkey.

Ankara reacted angrily earlier this month to Washington’s support for an oil deal between an American company and the YPG.

Retired Brig. Gen. Naim Baburoglu says Turkey’s neighbors to its southeast today are the United States and Russia, and no longer Syria.

“Military might is not always sufficient for getting definitive results. The actors Turkey faces on this front have the ability to prevent its moves” Baburoglu wrote for the news portal Gercek Gundem. Underlining the need for “effective diplomacy” in securing Turkey’s interests, Baburoglu warned that “making headway with actors that have the ability to influence the course of events is commensurate with one's geopolitical strength.”

Ankara’s other principal aim in northern Syria was to establish a 480-kilometer (300-mile) by 32-kilometer (20-mile) “safe zone” under its exclusive control. Its intention was to settle a large part of the 3.6 million Syrians who have sought shelter in Turkey in this zone to alleviate the burden they pose.

Ankara also planned to populate this whole region with Sunni Syrians who are friendly to Turkey, thus establishing a buffer zone between itself and Kurdish settlements in the region. It failed, however, to secure international support for this project because of its insistence on exclusive military and administrative control over the proposed zone.

As for territory west of the Euphrates, Turkey launched Operation Spring Shield earlier this year to gain control over the whole of Idlib province. Its intention was once again to settle Syrian refugees there and to use the province as a military springboard for strikes against the YPG. However, Ankara ended up settling for much less once again after Russia refused to let Turkish forces move too far south and gain control of the strategic M-4 highway that runs through the middle of the province.

The meeting in Moscow in March between Erdogan and Russian President Vladimir Putin resulted in Turkey having to halt its operation in Idlib. The meeting highlighted once more the limitations Turkey faces in Syria from the United States and Russia.

“When confronted with powerful actors that command escalation dominance, Turkey has backed down or settled for face-saving deals, as was the case with the Moscow memorandum in March over the situation in Idlib,” Kardas wrote in an article for the German Marshall Fund.

Moscow has called on Ankara to turn over territory captured by Turkish forces in northern Syria from the Islamic State or the YPG to the regime. Erdogan has rejected this demand. Russia also continues to demand that Turkey eradicate radical Islamist groups in Idlib — some of which are Ankara’s proxies. Turkey’s failure or unwillingness to do so is providing Moscow and the Syrian regime with an excuse to strike targets in the portion of Idlib north of the M-4 highway that is controlled by the Turkish military and its proxies.

In the meantime, Turkey is reinforcing its forces in Idlib in anticipation of more trouble ahead. It clearly aims to hang on to what it holds today by using military force if necessary.

As Metin Gurcan has underlined in Al-Monitor, the situation in the province remains highly volatile, with a military escalation looming large.

Turkey’s military involvement in Libya and its success in preventing warlord Khalifa Hifter from seizing the capital Tripoli appear to vindicate Erdogan’s coercive diplomacy. Libya, however, may end up as another half-finished project.

Turkey has put its money on one horse in this crisis and needs the predominantly Islamist government of Fayez al-Sarraj to gain full control of the country. Otherwise, Turkey’s position in that country will remain shaky.

The division of Libya, which would leave Hifter with control over most of the country and its oil wealth, remains a nightmare scenario for Ankara. It is not clear, therefore, if Turkey’s abandoning of impartiality and military embroilment in the Libyan conflict will deliver a return on these investment.

Ankara’s involvement in the crisis has poured more fuel on growing Arab animosity toward Turkey. Foreign policy analyst Murat Yetkin notes that Erdogan’s Islamist orientation, his support of the Muslim Brotherhood and his many references to Ottoman dominance of the region have increased resentment against Turkey among Arab regimes.

“What unites the Arabs today is no longer an anti-Israel but an anti-Turkey stance. What is surprising is that Erdogan does not want to see this,” Yetkin wrote in his popular Yetkin Report.

Kardas argued that Turkey's frequent military threats underscore its failure to draw on a wider array of diplomatic instruments. The most notable failure in this regard, he maintains, is a deficiency in coalition-building.

“If mishandled, [Turkey’s] current engagements can trigger an uncontrolled spiral of escalation and drag Ankara into a difficult choice between backing down or getting entrapped in dangerous military encounters over issues of questionable importance,” he said.