Will Erdogan risk an operation in Syria?

Turkish media reports suggest that an incursion by the Turkish army east of the Euphrates is imminent. 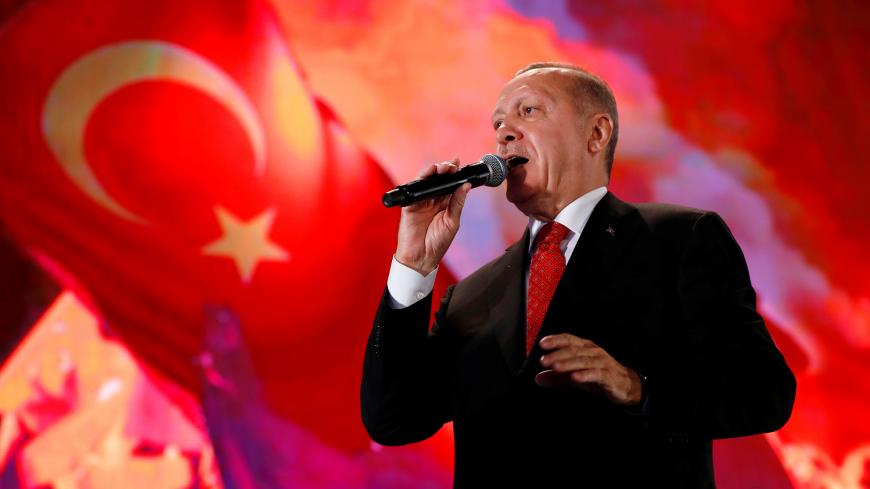 The crisis between Turkey and the United States over Ankara’s purchase of Russian S-400 air defense systems may have pushed the Turkish threat of a military incursion into northern Syria against the Kurdish Peoples’ Protection Units (YPG) into the background for a time.

The topic, however, is back on the agenda as Ankara beefs up its military presence along the Syrian border, leading to fresh speculation that an operation by Turkey is imminent.

There is also a sense of urgency on the Turkish side after Britain and France responded positively to President Donald Trump’s call to send troops to lands held by the YPG with US support.

Multiple reports since November have also indicated that the United Arab Emirates and Saudi Arabia have sent troops to the region to assist US forces, pouring more fuel on Ankara’s sense of urgency.

Turkey continues to complain bitterly about US support for the YPG, a Kurdish group that Ankara says is an offshoot of the outlawed Kurdistan Workers Party. Ankara considers autonomy for the Syrian Kurds under any guise or name to be an existential threat to its security.

Washington, however, views the YPG with sympathy after the group helped defeat the Islamic State in northern Syria with US support, and has taken the YPG under its protection.

Trump threatened in January to “devastate Turkey economically if it hits the Kurds” in northern Syria.

Briefing reporters on his meeting with Erdogan, on the fringes of the recent G-20 summit in Japan, Trump boasted again about how he had prevented Erdogan from “wiping out the Kurds.”

There is also growing speculation that links the start of deliveries of the S-400s to Turkey last week — and the threat of US sanctions because of this — with a cross-border operation east of the Euphrates.

Bulent Aydemir, who heads the Ankara office of the popular daily Haberturk, said the S-400s will be activated in 1 to 1½ months and provide security for Turkey’s next operation in Syria — which, he said, “is just around the corner.”

“Together with the S-400s it will be out of the question to prevent a Turkish operation against [YPG] targets east of the Euphrates with the threat of US sanctions,” Aydemir wrote.

But Turkish President Recep Tayyip Erdogan said July 15 that the S-400s will not be fully deployed before April 2020.

Retired Gen. Naim Baburoglu, however, said he believes strong US sanctions over Turkey’s S-400 purchase could increase the prospect of a new Turkish incursion into northern Syria.

“If the sanctions are tough, Turkey could say, ‘I have to secure my national interests and national security, and eliminate the threat of terrorism from Syria,’ and mount an operation,” Baburoglu said in an interview.

The corollary of this is that if Trump delays the sanctions, as Erdogan hopes and expects, this could also delay a Turkish operation.

However, if Erdogan were to order a military attack east of the Euphrates, regardless of the risks, this will further undermine the already crisis-ridden Turkish-US relationship.

Erdogan has publicly vowed to eradicate the YPG presence in northern Syria despite the US military presence there.

Ankara and Washington have also been negotiating for months, albeit to no avail, over a “safe zone” Turkey proposes to set up in northern Syria, which it wants secured exclusively by Turkish forces.

Ankara wants to use a 32-kilometer-deep (20-mile) zone to not only roll back the YPG but to also repatriate some of the nearly 4 million Syrians that have taken refuge in Turkey.

Having a disdain for diplomacy, Erdogan has brandished the military card against the YPG from the start with his “We could come unexpectedly one night” approach.

He uttered those words — taking a line from a famous Turkish poem — before ordering Turkey's Euphrates Shield operation in northern Syria in August 2016.

CNN’s Ryan Browne, citing defense officials, reported over Twitter on July 13, “The US military is closely watching the Syria-Turkish border due to growing concerns US troops in NE Syria will be caught up in a potential cross border Turkish military operation targeting Kurds in the coming days.”

Meanwhile, Pentagon spokesman Cmdr. Sean Robertson told the Kurdistan 24 channel, “Unilateral military action into northeast Syria by any party, particularly as US personnel may be present or in the vicinity, is of grave concern.”

Robertson added, “We would find any such actions unacceptable.”

The possibility that Turkish and American forces may face off in the event of a Turkish incursion has been a concern for some time. Erdogan has made it clear that this would not deter Turkey, although he has also indicated that he does not foresee such a confrontation.

Baburoglu said he believes that the United States would refrain from any direct confrontations with Turkish forces, preferring instead to provide support to the YPG to fight the Turkish army and its Free Syrian Army allies.

Others, however, say that the risk that Turkey may have to confront the United States or other forces from the US-led coalition in Syria cannot be discounted. If that were to happen, they say, it would be an instant game changer for Turkey, not just in Syria but in the eastern Mediterranean too.

Ankara is currently flexing its militarily muscles against a US- and EU-led coalition in the eastern Mediterranean that is supporting Cyprus against Turkish claims over offshore energy exploration rights.

In a phone conversation July 12 with acting US Defense Secretary Mark Esper, in which the S-400 issue was discussed, Turkish Defense Minister Hulusi Akar restated Ankara’s determination regarding the YPG and the establishment of a safe zone in northern Syria.

The official Anadolu Agency said Akar told Esper, “The only military force that is ready, competent and appropriate for the establishment of a safe zone in northern Syria is the Turkish Armed Forces.”

Akar also said, “Turkey will have to take necessary measures and will not allow terrorist groups to seek safe havens right across its borders.”

Such repeated warnings from Ankara over the months, however, have rung hollow since Turkey has not been able to mount any military incursion east of the Euphrates despite its many threats.

Clearly disappointed that this is the case, firebrands in the pro-government media are exhorting Ankara to mount an operation without further delay.

“The east of the Euphrates has been and continues to be an existential matter for Turkey,” wrote Ibrahim Karagul, the editor of the daily Yeni Safak.

“If Turkey had intervened in the region by now, it would not have been encircled in the eastern Mediterranean,” he added, also referring to the situation off the coast of Cyprus.

Although it continues to pay lip service to Turkey’s security needs, and has accepted in principle the need for a safe zone, Washington is not on the same page with Ankara on the question of who will secure this zone.

Washington opposes Turkey’s holding this zone alone, and is prepared, at best, to allow a Turkish participation under US command.

An operation by Turkey against the YPG would unite the country with Erdogan at the helm. He needs this politically after his Justice and Development Party lost major ground in recent nationwide municipal elections.

This, however, depends on such an operation achieving its goals, which is not guaranteed. If Erdogan fails, this could spell political disaster for him at home, and also weaken Turkey’s hand in Syria immeasurably.

“Erdogan has not carried out his threats so far, and it is likely that this situation will continue given the military and political risks involved,” a Western diplomat told Al-Monitor on condition of anonymity.

Russia’s position is also an unknown in this equation. Moscow has made it clear in the past that Ankara should hand over the lands it captured in previous operations in northern Syria from the Islamic State and the YPG to the Assad regime.

Turkey and Russia are also engaged in a proxy war in Idlib despite the appearance of growing military ties between them.

How Erdogan manages the complex situation in Syria will be crucial for Turkey’s long-term security interests.