Macron’s call for a “new order” in Lebanon conflicts with Erdogan’s regional ambitions, but the climate in Lebanon is no longer as welcoming to Turkey’s president as it was a decade ago. 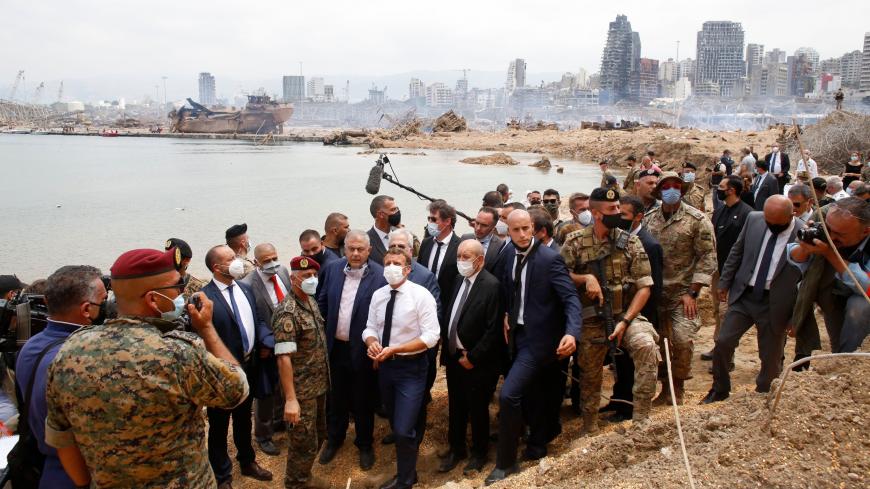 French President Emmanuel Macron’s momentous visit to Beirut, which saw him posture as Lebanon’s savior after the disastrous blast, generated a range of sentiments, from astonishment and indignation to admiration and envy, depending on one’s vantage point.

For Turkey, the French bid for a comeback in the region after failed interventions during the Arab Spring comes at a time of bilateral tensions, with Turkey challenging France in its former colonial lands. Had the port blast happened a decade ago, Turkish President Recep Tayyip Erdogan would have probably been the first leader to rush to Beirut to offer sympathy and support. But since the enthusiastic welcome he received in November 2010, Erdogan has become an “unwanted guest” for many of Lebanon’s political camps.

The massive Aug. 4 explosion at the Beirut port, caused by the unsafe storage of 2,750 tons of ammonium nitrate, was widely seen as the collapse of Lebanon’s corrupt and sectarian political system, which Macron seized as an opportunity for brownie points in foreign policy. In a rather imperious tone, he called for “a new political order” to replace “a system captured by organized corruption” and urged Lebanese leaders for “clear answers” on reform, pledging to return Sept. 1.

Macron’s extraordinary posturing was too much even for the French as he seemed to stake a claim on shaping Lebanon’s future, almost as if picking up where the French mandate left it off in the 1940s. Responding to the criticism, Macron said he was acting out of friendship and in the interest of the Lebanese people because if France did not play its part, “other powers may interfere whether it be Iran, Saudi Arabia or Turkey.”

Yet, many of the leaders that Macron blamed for the corrupt order have long been buddies with Paris, including Saad Hariri, who was prime minister in four of the six years that the stockpile of ammonium nitrate was at the port. Moreover, the sectarian system underlying Lebanon’s woes is essentially a French product, albeit revised under the 1989 Taif agreement, and France has always defended it.

On Aug. 8, Erdogan sent Vice President Fuat Oktay and Foreign Minister Mevlut Cavusoglu to Beirut to convey pledges of assistance and reconstruction offers, but the political climate in Lebanon is no longer very promising for Erdogan. How did Turkey lose ground there?

Ankara’s Syria policy has resonated badly in Lebanon, especially for fostering radical Islamists next door. Even before the Syrian crisis, Salafi-Islamist groups in Tripoli, Akkar and Palestinian refugee camps had shown what dangers could be in store for Lebanon and its fragile ethnic, religious and sectarian fabric. Then Turkey and Lebanese forces became adversaries in the Syrian war as Hezbollah rushed to help Damascus in 2013. Erdogan lost the sympathy of Lebanon’s “resistance” that he had earned with his harsh outbursts against Israel.

And while Ankara’s sectarian leanings favoring Sunnis over Shiites and claims of leadership in the Sunni world may be flattering for some in Lebanon, for many others they echo back to Lebanon’s bitter past and current predicaments.

Third, the Lebanese are widely averse to the Ottoman legacy that underlies Erdogan’s regional ambitions. This goes not only for ethnic Syriacs and Armenians, the remnants of genocide under the Ottomans, but also for many Arabs. The 1915-1916 executions in Damascus and Beirut, ordered by Jamal Pasha, the Ottoman governor nicknamed Saffah or “the blood-shedder” by Arabs, have never been forgotten. Lebanon marks May 6 as Martyrs Day in memory of the executed nationalists and the square where they met the gallows is called Martyrs Square.

Fourth, Turkey’s “rediscovery” of its ethnic kin in Lebanon has allegedly involved its intelligence service, along with diplomats and civil society, irking the Lebanese authorities.

Finally, some of the Sunni actors who used to be close to Turkey have drifted away, wary of angering Saudi Arabia. Back in 2005, Hariri and Erdogan were so close that a company owned by the Hariri family acquired the controlling stake of Turk Telecom in a major privatization. The sell-off grew into a scandal as the company defaulted on huge loans for years and finally Turkish lenders took over its stake in 2018. More importantly, however, the Hariris have deep-rooted ties with the Saudis. And amid growing tensions between Ankara and Riyadh, Turkey’s Sunni partners in Hariri’s Future Movement have largely distanced themselves from Ankara.

A recent quarrel between Lebanese of Armenian and Turkish origin illustrates how Turkey’s standing in Lebanon has evolved under Erdogan. In a live program on Al Jadeed TV in June, ethnic Armenian host Nishan Der-Haroutounian called Erdogan “an obnoxious Ottoman” as former Environment Minister Wiam Wahab criticized Erdogan’s regional policies. The show sparked a barrage of insults to Armenians on social media, while members of an Arab community that claims ancestry from Turkey’s southeastern province of Mardin staged a protest outside the TV station. Mounir Hassan, a leading member of the community, posted a video threatening to slaughter Beirut’s Armenians. “We … are proud of the massacre that our Ottoman ancestors carried out against the Armenians because you deserve it,” he said. Ankara, meanwhile, handed a formal note of protest to Beirut and legal proceedings were launched against Der-Haroutounian.

The incident unleashed accusations that Ankara was trying to mobilize communities with ancestries from Turkey to gain a foothold in Lebanon. The daily Al Akhbar wrote that Turkey had been using “smart mechanisms” in the style of the Muslim Brotherhood to cultivate influence in Tripoli and northern Lebanon, where the Sunnis are concentrated, since Erdogan visited the Turkmen village of Kouachra in 2010. The article alleged that the Turkish diplomatic mission and intelligence service were involved in the efforts, along with TIKA, the government’s agency in charge of development projects abroad. More than 10,000 Lebanese have received scholarships to study in Turkey, it said, adding that the Turkish Embassy was encouraging those of Turkish and Turkmen ancestry to obtain Turkish citizenship.

During his Aug. 8 visit to Beirut, Turkey’s foreign minister confirmed the citizenship incentive as he addressed a crowd chanting pro-Erdogan slogans. “We’ll grant Turkish citizenship to those brothers of ours who say ‘I’m Turkish or I’m Turkmen’ and request citizenship. That’s the president’s instruction,” Cavusoglu said.

Lebanese authorities reportedly suspect Turkish interference in anti-government protests in the north earlier this summer amid concerns that Turkey might be using humanitarian aid for the needy to cultivate political influence. In remarks to the daily Al-Lewa in early July, then interior minister Mohammed Fahmi said four people had been arrested after arriving on a private plane from Turkey in possession of $4 million, pointing an accusing finger at Ankara.

In a July 29 article on its Arabic wire, Turkey’s state-run Anatolia news agency dismissed the allegations as a smear campaign. The report claimed that media close to Hezbollah and the Saudi-Emirati axis were trying to demonize Turkey, each for its own purposes, including to undermine the Lebanese Sunnis, intimidate Christians, consolidate Shiites behind Hezbollah and blackmail financially the Saudi-Emirati pair.