What's next for Turkish-Iraqi ties after deadly drone strike?

The killing of Iraqi border guards in a Turkish drone strike undermines Baghdad’s traditional flexibility toward Ankara at a time when Turkey’s Arab adversaries are seeking to draw Iraq to their side. 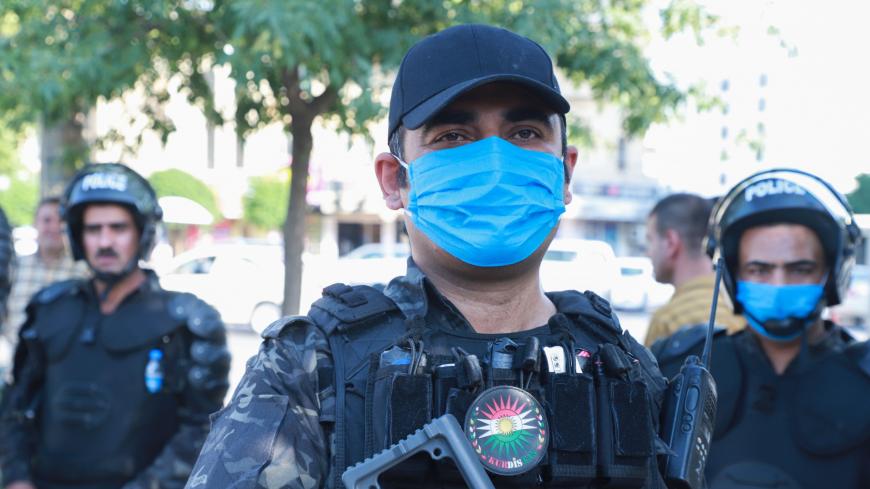 Kurdish riot police, some wearing protective masks due to COVID-19, stand guard during a demonstration to denounce the Turkish assault in northern Iraq, in Sulaimaniyah city, in the Kurdish autonomous region of northern Iraq, on June 18, 2020. Turkey launched a rare ground assault into northern Iraq on June 17, deploying special forces against rebels from the Kurdistan Workers Party, which is blacklisted by Ankara as a terrorist group. - SHWAN MOHAMMED/AFP via Getty Images

For years, Ankara and Baghdad have sought to avoid a rupture over Turkish cross-border military operations against the Kurdistan Workers Party (PKK), the outlawed group that has waged an armed campaign against Turkey's government for nearly four decades. The PKK is based in mountainous border areas in Iraqi Kurdistan, which has been outside Baghdad’s control since the 1990s.

Ankara would argue that Baghdad is not in a position to object to the operations because it is unable to prevent the PKK's entrenchment on Iraqi territory. And when Iraqis raised their sovereignty rights, Ankara would challenge them to uproot the PKK, which Baghdad could not do. In other words, Baghdad would protest to save face but would acquiesce to Turkey’s incursions.

Yet this seems to be changing amid a Turkish military campaign since last year, with Baghdad growing more vocal and assertive.

As part of Operation Claw, unfolding in phases since mid-2019, Turkish troops have advanced to a depth of 15 kilometers (9 miles) inside Iraq and set up more than 50 deployment sites. In an unprecedented incident Aug. 11, a Turkish drone strike killed two top Iraqi border guard officials in the Sidekhan area, while speculation was abuzz in Turkey that senior PKK commander Cemil Bayik had perished. The victims were identified as a general and a brigadier from the border guard, while a lieutenant colonel and a private were wounded.

According to Sidekhan Mayor Ihsan Chalabi, the drone targeted the commanders as they met with PKK members to defuse tensions after a confrontation over the border guard’s attempt to set up a checkpoint in the area. The PKK confirmed that a senior member of the group, Agit Garzan, was killed in the strike.

A Kurdish source told Al-Monitor that the slain Iraqi brigadier, Zubair Hali, was a native of the region “whom the PKK knew well” and initiated the meeting after the PKK opened fire on approaching Iraqi border guards the previous day. “They dined after the meeting. The attack happened as the vehicles were leaving. Agit was in Zubair’s vehicle. It was a vehicle with GPS, which was being monitored and well known,” the source said.

The head of the Iraqi parliament’s Security and Defense Committee, meanwhile, said the border guards were on a mission to establish checkpoints to cover a security gap in a 50-kilometer (31-mile) stretch along the border and had approached an area the Turkish military considered as a “prohibited” zone. The Iraqi presidency, parliament and foreign ministry all condemned the attack, while the Turkish ambassador was handed a formal note of protest, the third over Operation Claw. Moreover, Baghdad disinvited Turkey’s defense minister, who was scheduled to visit Aug. 13.

Fallout with a neighbor is the last thing Iraqi Prime Minister Mustafa al-Kadhimi would like at a time when the Iranian-American tussle is dangerously escalating and domestic challenges persist, including growing popular anger with the establishment, resurging Islamic State attacks and the coronavirus pandemic. Eager to extricate Iraq from being a hostage to regional rivalries, Kadhimi has prioritized Tehran, Riyadh and Washington for his first foreign trips after becoming prime minister in May. He is trying to keep Kurdistan aboard as it reels from the Turkish operations, which have claimed civilian lives as well.

Yet the conditions that long ensured Baghdad’s acquiescence to Turkey’s military incursions are changing. Above all, a new political climate, marked by growing sensitivity against foreign interventions, is taking hold in Iraq after years of havoc wreaked by the Islamic State, sectarian strife and the US occupation.

The Iraqi Kurds, meanwhile, have grown anxious that Turkey could be aiming beyond the PKK as part of designs to undermine Kurds across the region, including their autonomous government. Such fears have led them to seek collaboration with Baghdad in protecting the border. Though the border guard is comprised of Kurds, it is an arm of the central government.

Iraq also is emerging as a new ground in the influence war between Turkey and its Arab adversaries after Syria and Libya. The bloc led by Egypt, Saudi Arabia and the United Arab Emirates is seeking to extricate Iraq from the grips of Iranian influence on the one hand, while taking advantage of Iraqi anger against Turkey on the other. The same bloc has sought to develop contacts with the Kurds as well, especially in Syria.

The Arab League and its parliamentary assembly pledged support for Iraq in any international move to stop Turkey as the league condemned the deadly drone strike Aug. 12. Separately, Egypt said Turkey’s actions were a “threat to regional security and stability,” while the UAE accused Turkey of “meddling in Arab affairs.”

Obviously, Baghdad seeks Arab solidarity and while those efforts are understandable in terms of turning up pressure on Turkey, it could hardly risk falling out with Turkey or Iran and drift to the Arab axis. Iraq is too weak and fragile to dare such a cost. It might be hoping for an Arab window to counterbalance Turkey and Iran but knows well how vital the Turkish and Iranian border gates are.

The Iraqi Foreign Ministry warned that Baghdad had “strong options” against Ankara, alluding to commercial ties, but observers believe the Iraqi response is unlikely to go beyond the diplomatic level.

In the first half of 2019, before Operation Claw kicked off, Ankara and Baghdad seemed optimistic for a new page in bilateral ties as Iraqi President Barham Salih and then-Prime Minister Adel Abdul Mahdi both visited Turkey. They discussed boosting bilateral trade to $20 billion and a $5 billion Turkish credit to help reconstruction in Iraq. Moreover, Turkish President Recep Tayyip Erdogan appointed a special envoy to work on an enduring water dispute and other outstanding problems with Iraq.

Bilateral trade volume reached $15.8 billion in 2019. Iraq has attempted to curb imports from Turkey but, without alternative domestic production or suppliers, the efforts have failed. Things might change in the long run as Baghdad aims to diversify trade with other neighbors, primarily Saudi Arabia. At present, however, Baghdad could hardly follow through with threats of sanctions. Still, it has the option of “passive sanctions,” that is, withholding cooperation on issues important for Turkey.

Chief among them is Turkey’s proposal for a second border crossing that aims to open an alternative route to Mosul and diminish the role of the existing one, which opens to Iraqi Kurdistan. (Mosul and Ninevah province are not part of the Kurdistan Regional Government, or KRG, which is based in Erbil). Despite Ankara’s insistence, Baghdad has dragged its feet for the past three years, especially after mending ties with the KRG.

Another plan that remains in limbo is the renovation of the oil pipeline from Kirkuk to Turkey’s Mediterranean port of Ceyhan, disabled by the Islamic State in 2014.

Turkey’s new crossing project has sparked fears that have made their way even to Iraqi soap operas, namely that Ankara is planning to reclaim oil-rich Mosul and Kirkuk, which were part of the Ottoman Empire and the subject of a bitter territorial dispute as modern Turkey’s borders took shape in 1923. Turkish nationalists continue to see Mosul and Kirkuk as a lost homeland, providing ammunition to Turkey’s adversaries. Hence, many Arabs see the proposed crossing as a gateway for Erdogan’s regional ambitions, while the Kurds suspect it is designed to weaken Kurdistan.

Can Ankara and Baghdad reverse the deteriorating trend in their ties? Ankara is unlikely to stop the operations as long as Erdogan keeps his alliance with nationalists at home and avoids a fresh bid for peace with the Kurds. Turkey's insistence on a military solution is now threatening to spawn an Arab problem, atop its Kurdish one. Another major factor is the stance of Washington, which, under President Donald Trump, has enabled Turkish ventures from Iraq to the Mediterranean. For many regional actors, the US presidential elections in November represent a prospect of change.