Turkey’s intervention in the Libyan war is driving its adversaries to retaliate beyond Libya in conflict zones along Turkey’s own borders. 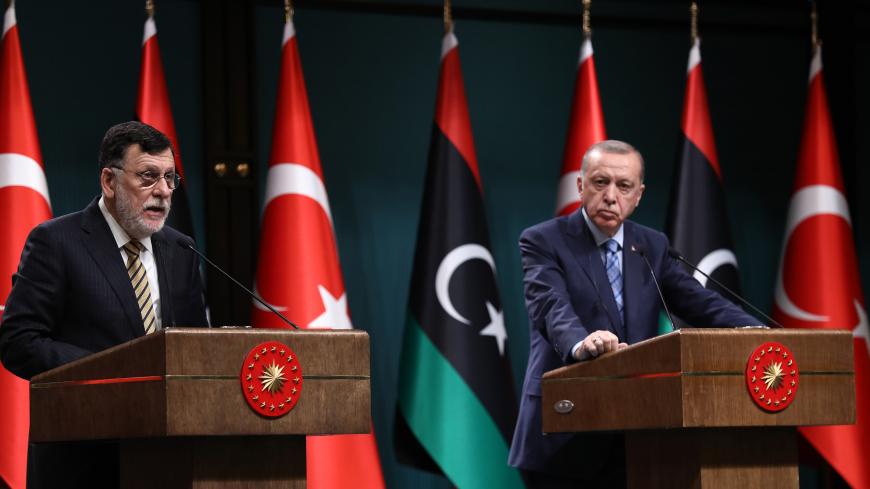 Turkey's regional rivals are going beyond Libya as they respond to the scale-tipping Turkish military intervention in the North African country. Having declared a red line at Sirte and al-Jufra on the Libyan battlefield, Egypt and its partners are stepping up efforts to impede Turkey on the diplomatic front as well as in Syria and Iraq.

While forging closer ties with Damascus, Egypt has at the same time focused on the Syrian Kurds, following in the steps of the United Arab Emirates and Saudi Arabia. According to Turkey’s state-run Anadolu news agency, Egypt has now sent troops to Idlib, the rebel-held province where Turkey has built up a military presence to keep the Syrian army from advancing. Citing “reliable military sources,” Anadolu reported July 30 that about 150 Egyptian soldiers, arriving via the military airport in Hama, had been deployed to front lines in Khan al-Asal in the western countryside of Aleppo and around Saraqib in southern Idlib, armed with light weapons and coordinating with Iran's Islamic Revolutionary Guard Corps and Iran-backed militias.

Kamal Amer, chair of the Egyptian Parliament’s Defense and National Security Committee, denied the report and the Syrian Observatory of Human Rights said its local sources had failed to confirm the deployment.

The veracity of the report may be disputed, but such Egyptian assistance to Damascus would hardly be a surprise, given the course of events. Ample signs have already emerged that the Egypt-Emirati-Saudi axis is following a strategy to contain and distract Turkey in conflict zones in its proximity. The moves the three countries have been making and the ties they seek to develop are largely a response to Turkey and despite some gaps and discordance, they have complemented each other in terms of purpose.

Egypt’s efforts to hinder Turkey began several years ago, with Ankara’s patronage of the Muslim Brotherhood underlying the bad blood between the two. In November 2016, for instance, the Lebanese newspaper As-Safir claimed that Egypt had dispatched 18 helicopter pilots to help the Syrian army and planned a larger military deployment down the road. The report followed a visit to Cairo by Syria’s intelligence chief, Ali Mamlouk, the previous month. Once the intelligence chiefs of two key players in the Middle East take the stage, it's clear that overt or covert cooperation is in the cards.

For quite some time, Egypt has been trying to lay the ground for Syria’s return to the Arab League while working connections with Kurdish actors. It has allowed the Kurdish-led Syrian Democratic Forces to open an office in Cairo, facilitated dialogue between the Kurds and Cairo-based Syrian oppositionists and sought to be a bridge between the Kurds and Damascus.

Even more remarkably, Egypt has vocally slammed Turkey’s ongoing military operations in northern Iraq and sought to make use of Baghdad’s unease to boost bilateral ties and draw Iraq into the Arab fold as much as possible. Turkey’s operations target the outlawed Kurdistan Workers Party (PKK), which has long used bases in Iraqi Kurdistan to sustain its armed insurgency against Ankara.

In Syria, Cairo’s ties with the Kurds are not based on a dual agenda, unlike the Saudis, whose agenda overlaps to a certain extent with that of the United States. Since the overthrow of the Muslim Brotherhood government in 2013, Cairo has steered clear of a regime-change agenda in Syria. Unlike in Libya, it has pursued a more individual approach that allows it to add military and intelligence dimensions to its relationship with Damascus. Tellingly, Egyptians were absent from a delegation of Saudi, Emirati and Jordanian military officials that met with SDF leaders in northeast Syria in May 2018.

Of note, Egypt’s intelligence chief, Abbas Kamel, has stepped up contacts with Arab counterparts across the region. In February, he visited eastern Libya, Tunisia and Algeria in what was reportedly an effort to enhance intelligence collaboration against growing Turkish influence in the region. In early March, Kamel traveled to Damascus, where he met with Mamlouk — vice president since last year — to discuss “the war on terrorism in Syria” as well as regional developments, according to local media reports. Visiting Damascus at the same time was a senior delegation from eastern Libya that signed dozens of protocols with the Syrian government and reopened the Libyan Embassy in the city. The ground for the visit was laid by Egypt and the Libyans spoke of cooperation against Ankara’s “expansionist” ambitions in the region.

On July 21, Egyptian President Abdel Fattah al-Sisi had a phone call with the Saudi king, followed by a flurry of Saudi diplomatic activity in the region. Saudi Foreign Minister Faisal bin Farhan traveled to Algeria, Tunisia and Morocco after a July 27 visit to Cairo, where he reaffirmed Saudi support for Egypt in the Libyan turmoil. In sum, Riyadh is trying to strengthen Egypt’s hand in Libya and weaken the Turkey-Qatar axis, but is cautious not to appear to be encouraging an Egyptian-led war in the country.

Sisi and the king spoke a day after the Egyptian Parliament authorized a cross-border military deployment on “a western front” — a reference to Libya — to counter “criminal armed militias and foreign terrorist elements,” after Cairo’s June 6 appeal for a cease-fire and negotiations in Libya fell through.

The risk of a Turkish-Egyptian faceoff in Sirte may be frozen for now, but the tensions are taking on new dimensions as Turkey becomes the target of a containment strategy of sorts. The maneuvers of the Egypt-Emirati-Saudi axis could eventually fail to change the multi-factor equilibrium in Libya, but the trio might create serious troubles for Ankara by edging into restive areas along Turkey’s borders, primarily through ties with the Kurds. Up until the 1998 Adana accord, which averted the threat of Turkish military action against Syria for harboring the PKK, regional issues linked to Turkey’s internal dynamics were of little interest to other Arab actors. This policy is gradually changing.