Is Syria’s eastern front about to boil over?

Another tough week for US-Turkey relations as Erdogan accuses US of "sick mentality." 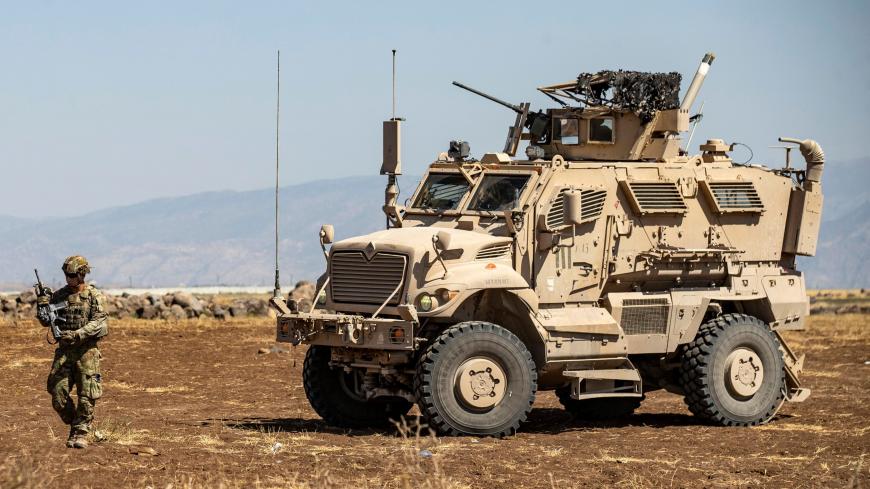 A US soldier stands in front of a military vehicle patrolling near the city of al-Malikiyah in Hasakah province in northeastern Syria near the Turkish border, on Aug. 27, 2020. - DELIL SOULEIMAN/AFP via Getty Images

Syria may be on the verge of another escalation in violence.

Friction is increasing in the east, where on Aug. 25 a Russian vehicle hit an American vehicle on patrol, injuring four US soldiers.

Meanwhile, in the northwest, there is a gathering storm around Idlib, where Russian-backed Syrian forces may be threatening another, perhaps final, assault on the enclave run by the terrorist Hayat Tahrir al-Sham (Liberation of the Levant) and other armed opposition groups, as Sultan al-Kanj reports.

All this comes as US-Turkish relations remain poor. The only thing that seems to keep ties from going into the abyss is the personal connection between US President Donald Trump and Turkish President Recep Tayyip Erdogan, although you couldn’t tell by Erdogan’s comments this week.

The Aug. 25 incident, after which the Pentagon accused Moscow of breaching the US-Russia deconfliction agreement, occurred as the Syrian eastern front becomes increasing crowded and volatile.

US troops skirmished with Syrian troops near Deir ez-Zor and Qamishli earlier this month. One Syrian soldier was killed.

The northeast includes the Turkish military occupation zone. Turkish military and armed proxy forces invaded northeast Syria in October 2019 to create a security belt or safe zone against the perceived threat from Syrian Kurdish groups there. Those groups happen to have been vital US partners against the Islamic State. Erdogan has also entertained the fantastical notion that a significant number of the 3.6 million Syrian refugees in Turkey could be relocated in this area.

This week, Turkey and its Syrian proxy forces yet again cut off drinking water to the Hasakah region, as Amberin Zaman reports.

Neither the United States nor Russia has the diplomatic weight at this point to keep the east from boiling over. US diplomatic levers are with the mostly Kurdish Syrian Democratic Forces (SDF), which Turkey claims is a cover for the People’s Protection Units (YPG), which Ankara sees as linked to the Kurdistan Workers Party (PKK). Both the United States and Turkey have designated the PKK a terrorist group.

Kirill Semenov explains the risks for Russia in the so-called trans-Euphrates region. “Moscow does not have the necessary leverage on the Syrian regime to prevent Syrian provocations against the Americans, nor does it have sufficient forces to carry out effective military operations,” Semenov writes. “In this area Russian and Syrian troops do not have full territorial and administrative control. The US-backed SDF continues to maintain its presence, with its affiliated civil administration, not to mention US military installations.”

It gets even more complicated. Russia and Syria have their own military agreements with the SDF following the Turkish invasion. The US decision to stay in the region to secure Syrian oil undercuts Moscow’s flagging efforts to reconcile the SDF with Syrian President Bashar al-Assad’s government. The presence of 600 US troops in Syria empowers the SDF to take a tougher line with Damascus. Meanwhile, according to Semenov, Russia is seeking to expand its influence by reconciling tribal leaders with Damascus to undercut the SDF’s influence.

The risk of inadvertent clashes is high. There are US, Russian, Russian-Turkish and US-SDF patrol routes, in addition to Syrian, Syrian opposition and Iranian forces in the area, as well as Islamic State dead enders. Check out this map of patrol routes from the Institute for the Study of War and you will wonder how the skirmishes have been kept limited so far.

And that brings us to Iran which, according to Semenov, is seeking to expand its ground game in the area via the Syrian military. The United States is hoping to leverage Russia against Iran. This approach has merit, but is easier said than done. Anton Mardasov explains here how Moscow is facing a decision point regarding potential arms sales to Tehran, given the lifting of the longstanding UN arms embargo on Iran.

Erdogan accuses US of "sick mentality"

Considering that the United States has adopted an adversarial posture with Iran, Syria and Russia, the first stop for US policy in Syria now should be Turkey, a NATO ally.

Should be. Instead, Syria remains a source of friction in US-Turkey relations, as Washington has been unable to thread the needle on its desire to improve ties with Ankara and manage its partnership with the SDF.

For example, Turkey has blocked the participation of the Democratic Union Party (PYD), the political affiliate of the YPG, in the Syrian opposition.

The Syrian Constitutional Committee convened this week in Geneva, a standout diplomatic achievement for UN Syria envoy Geir Pedersen, but Turkey is still not allowing representatives from the PYD, which holds sway and territory in the country.

James Jeffrey, the US special representative for Syria engagement and also special envoy to the global coalition to defeat the Islamic State, was in Turkey this week to discuss Syria. While some of the public statements coming out of the meetings will signal some common ground, especially in opposition to Assad and joint support for the non-Kurdish Syrian opposition, the overall state of relations remains low.

Erdogan said Aug. 24 that the US approach to Turkey conveyed a "sick mentality." By "collaborating with the PKK/YPG terrorist organization, they took up a position against our country.” He described US policy toward Turkey as a "disgrace to democracy" and referred to "fascist plans" by US politicians toward his country.

Erdogan here is not showing much nuance, or much appreciation for Trump greenlighting the Turkish invasion of Syria, which he did in a call with Erdogan in October 2019.

On Aug. 25, the day after Erdogan’s remarks, the State Department strongly objected to his meeting with Ismail Haniyeh, head of the Hamas political bureau, as Elizabeth Hagedorn reports. The Turkish Foreign Ministry rejected the US statement as "impertinent," adding that “a country which openly supports the PKK, that features on their list of terrorist organizations and hosts the ringleader of the FETO [Fethullah Gulen, who Erdogan blames for the coup attempt in Turkey in 2016] has no right whatsoever to say anything to third countries on this subject.”

The frustration for US policymakers, who often, and rightly, underscore the many seeming contradictions and differences among the so-called Astana Group in Syria — Turkey, Russia and Iran — is how the three nonetheless routinely come together to strategize and issue statements on Syria. The Astana three banged out a joint statement last week that included opposition “to the illegal seizure and transfer of oil revenues” in Syria, referring to the US oil company deal with the SDF.

All that’s keeping the US-Turkish relationship from dropping over a cliff, it seems, is Trump and Erdogan’s personal connection, but even that may have taken a hit this week.

Trump has been talking up his relationship with Erdogan, but his Turkish counterpart may not have been listening.

During a meeting with Iraqi Prime Minister Mustafa al-Kadhimi at the White House on Aug. 20, Trump offered his good offices to help de-escalate Iraq-Turkey tensions over Turkish attacks on the PKK in Iraq, saying he has a “very, very good relationship with Turkey and with President Erdogan.” A senior State Department official implied the United States has since engaged, saying, “We are talking to all parties about this at a high level.”

Cengiz Candar writes that Erdogan’s moves in the eastern Mediterranean against Greece are designed to fire up his nationalist base and have the consequence, intentional or not, of causing one of the deepest rifts within NATO in some time. Semih Idiz adds that Erdogan’s coercive diplomacy leads Turkey to storm from crisis to crisis.

There is, in the end, no substitute for a meeting of the minds among Trump, Erdogan and Russian President Vladimir Putin on Syria. The Syrian eastern front is unstable, and no longer in Idlib’s shadow as a potential fault line for conflict.