Sudan's leaders have urged the United States to remove their country from a list of state sponsors of terrorism that also includes North Korea, Iran and Syria. 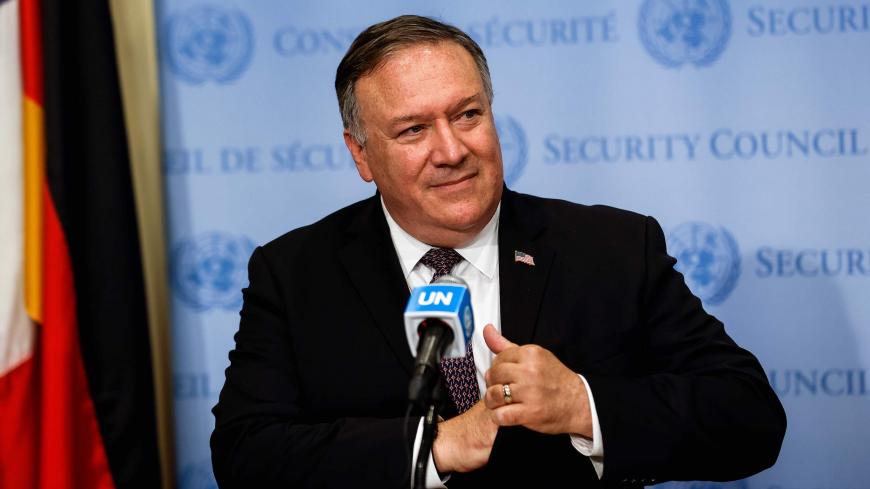 US Secretary of State Mike Pompeo speaks to reporters following a meeting with members of the UN Security Council about Iran's alleged non-compliance with a nuclear deal and calling for the restoration of sanctions against Iran at United Nations headquarters in New York, Aug. 20, 2020. - MIKE SEGAR/AFP via Getty Images

As he lobbied Arab countries to normalize ties with Israel, US Secretary of State Mike Pompeo also discussed dropping Sudan from a list of states that sponsor terrorism during his high-profile visit to Khartoum on Tuesday.

Sudan's Prime Minister Abdalla Hamdok tweeted that he held “direct and transparent talks” with Pompeo over ending his country’s pariah status. The United States lifted most sanctions on Sudan in 2017, but kept the African nation on its terror blacklist with just three other countries — North Korea, Iran and Syria.

Hamdok and his transitional government, which was formed after the toppling of longtime dictator Omar Bashir last year, have repeatedly called on Washington to take Sudan off the terror list. Khartoum’s continued designation makes it ineligible for much needed loans from international lenders and the stigma has kept foreign investment at bay.

The country was added to the list in 1993 for harboring international terrorist groups and serving as a transit point for Iran-backed extremist groups. Then-al-Qaeda leader Osama bin Laden lived in Sudan for five years before he was expelled in 1996 and found safe haven in Afghanistan.

The US government alleges that Sudan provided material support to the al-Qaeda terrorists who organized the twin bombings on the US embassies in Dar es Salaam, Tanzania, and Nairobi, Kenya, in 1998 that killed 224 people. The US State Department has reportedly asked Sudan to pay $335 million in compensation to the victims and their families in exchange for its removal from the terror list.

In February, Sudan reached a separate financial settlement with the families of the 17 US sailors who died during the al-Qaeda bombing of the USS Cole, a Navy destroyer, at a port in Yemen in 2000.

A statement from the State Department on Tuesday said the “rescission of Sudan’s State Sponsor of Terrorism designation remains a critical bilateral priority for both countries.”

Pompeo’s visit to Sudan comes on the heels of the Israel-UAE deal that Washington helped broker. On Tuesday, America’s chief diplomat landed in Khartoum on the first official non-stop flight between Israel and Sudan.

Officials have suggested that Sudan, along with Oman and Bahrain, could be next to establish formal relations with Israel, but Hamdok told Pompeo that his government lacked the authority to make such a move during the country’s transitional period. He also urged the United States not to link normalizing Israel ties with Sudan’s potential terror delisting.