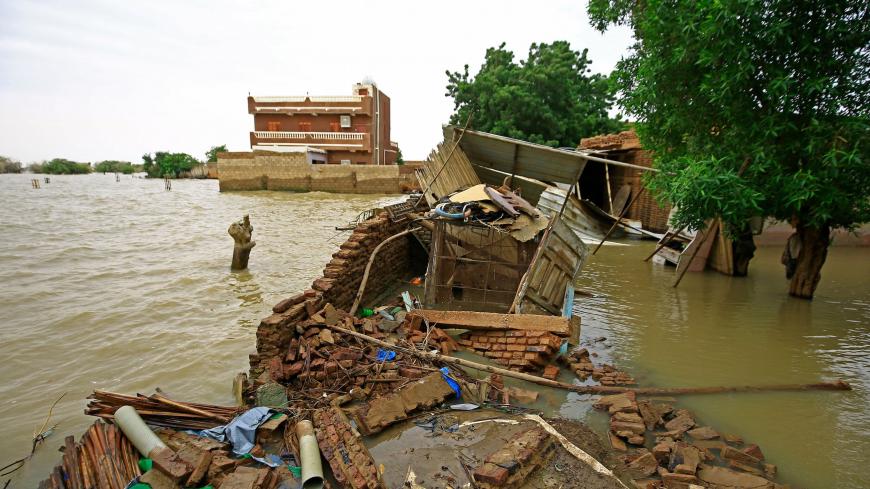 A general view shows debris and rubble following flooding in the capital Khartoum's southern neighborhood of al-Kalakla, on Aug. 31, 2020.

Sudan is in the midst of deadly flooding from the Nile River. The region's rainy season has also affected the contentious filling of the Grand Ethiopian Renaissance Dam (GERD).

The governor of Khartoum province, which includes Sudan’s capital, declared a state of emergency on Sunday, saying that 5,000 homes in the area have been completely or partially destroyed. Ayman Khaled Nimir described the flooding as a “unprecedented rise of the Nile water,” the state-run Sudan News Agency reported. The military deployed to the city of Khartoum to evacuate people, build barricades and distribute food, the Associated Press reported on Sunday.

The flooding began in mid-July. Throughout the country more than 37,000 homes have been destroyed and 90 people have died so far, according to the United Nations.

The Nile River flows north from Khartoum, where it is met by its Blue Nile and White Nile tributaries. The independent Sudanese news outlet Dabanga reported that water levels may be rising due to urban growth narrowing the riverbanks.

The Nile is an important part of the east African economy and the subject of tense and unfruitful negotiations involving Sudan, Egypt and Ethiopia surrounding Ethiopia’s GERD mega dam.

Ethiopia built the dam to generate sorely needed electricity, but Sudan and Egypt are worried filling the dam could dangerously lower the Nile. In July, Ethiopia announced that the heavy rainfall had already met the dam's first-year of filling target.