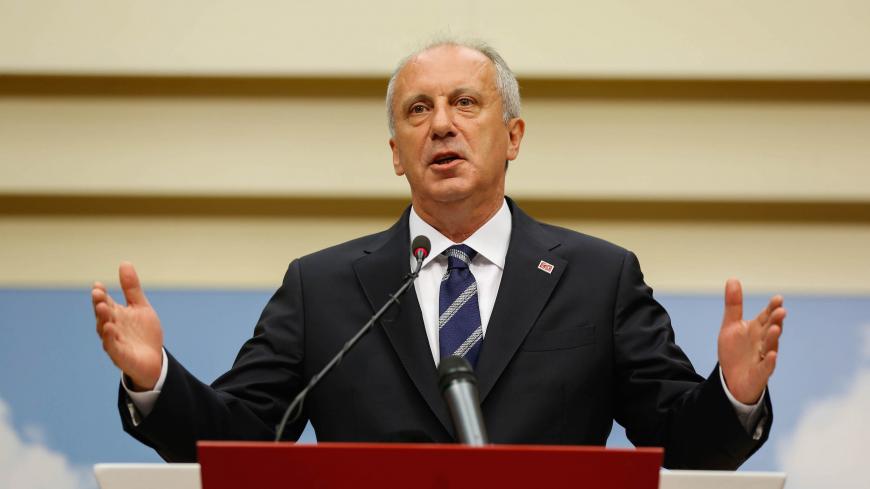 ISTANBUL — Turkish media was abuzz with rumors on Aug. 4 that Muharrem Ince, a former presidential candidate and member of Turkey’s main opposition Republican People’s Party (CHP), is seeking to establish his own breakaway party following disagreements with CHP leadership.

The news was initially reported Aug. 1 by the pro-government Hurriyet newspaper, which described Ince as frustrated with his minor role in CHP politics following a failed presidential bid in the 2018 elections. The next day, Ince said in a tweet he did not speak with any news outlet and he would explain himself after he made a decision “that I believe is right for my country.”

Then on Aug. 4, Saygi Ozturk, a reporter with the opposition paper, Sozcu, published an interview with an Ince aide who said the politician would leave the CHP and form a new party before the end of the year.

“Our party will have individuals who are experts in their fields, and their presence will excite everyone,” Ince allegedly told Sozcu through the unnamed aide.

While the reports remain unconfirmed, observers said Ince may be floating a trial balloon to gauge his popularity if he were to undertake such a feat. A longtime key figure in the CHP known to draw crowds with his charisma and fiery speeches, Ince has been largely sidelined in the party since the 2018 elections against Turkish President Recep Tayyip Erdogan, in which he drew about 30% of the vote.

Frustrated by his sliding stature in recent years, Ince may be trying to leverage rumors he is forming a new party to gain concessions from CHP leadership, said Merve Tahiroglu, Turkey program coordinator at Washington-based Project on Middle East Democracy.

“He hasn’t done anything really over the last two years, so it’s not like he has a promising new platform or an agenda that is radically different than the CHP’s,” Tahiroglu said. “He seems disgruntled that he hasn’t been given a better leadership role within the CHP, and that’s why he’s doing this."

The developments come after the CHP held a congress on July 25 in which Kemal Kilicdaroglu was re-elected as party chair for the seventh time since he first took the helm in 2010.

During the event, key party figures from the CHP’s Istanbul branch were celebrated, including City Mayor Ekrem Imamoglu and Provincial President Canan Kaftancioglu, both of whom have gained international recognition after sweeping into power with victories in the 2019 municipal elections.

Left out of the spotlight was Ince, who currently holds no formal position after serving two terms as CHP parliamentary group deputy chair and has been largely out of public view since the presidential run. In the Sozcu interview, Ince reportedly complained he was seated next to the bathroom during the congress and he took offense at the perceived gesture.

“He’s been very much isolated, excluded from elite politics with the CHP … and Kilicdaroglu hasn’t given any indication he’ll be a candidate for the party in the next presidential election,” Berk Esen, assistant professor for International Relations at Bilkent University in Ankara, told Al-Monitor.

Esen added, “I think that’s why he’s considering this move. He realized there isn’t any path to the top for him as long as Kilicdaroglu is there.”

Two years earlier, Ince stood as a formidable challenger to Erdogan, drawing broad national appeal by embracing conservative values often dismissed by CHP figures and performing traditional folk dances on the campaign trail. Yet his time in the limelight ended suddenly on June 24, 2018, when election results signaled a CHP loss and he was nowhere to be found.

His brand as an outspoken political force instantly collapsed when he abstained from giving a concession speech that night, instead telling a reporter via mobile text message that he had lost the elections.

“When I look at social media and when I speak with people about Ince, I see many have never forgotten that night,” said Edgar Sar, a political scientist and co-founder of the IstanPol Institute, a think tank based in Turkey.

More recently, Ince made headlines by joining the first mass prayers outside Istanbul’s Hagia Sophia, which was reconverted into a mosque following a July court decision. Though the CHP has long maintained a secular approach to party politics, Ince was among the first modern party figures who did not shy from religious subjects and broadened the party’s appeal to pious voters.

“In some ways, I think he set the mold that Imamoglu refined. The secularists who can pray,” Alan Makovsky, a senior fellow for National Security and International Policy at the Center for American Progress, told Al-Monitor.

“But I don’t see him making a ripple” if he were to form his own party, Makovsky added.

Though he remains a charismatic figure with name recognition among older CHP voters, observers believe he does not have the support to create a formidable political movement.

“He will have to rely on his charisma and nothing else,” Sar told Al-Monitor. “That charisma has limits.”

Still, since the establishment of Turkey’s presidential system in 2018, which allows for party alliances to help smaller political groups surpass the nation’s 10% electoral threshold, some believe Ince’s future maneuvers could have an impact beyond the further fragmentation of opposition movements.

“Under a presidential system with alliance politics, two percentage points means a lot,” Esen said. “That’s the reason why Kilicdaroglu talks with Temel Karamollaoglu, even though his [Felicity] Party gets 0.5% of the vote.”

Yet for now, many view the rumors of a new party led by Ince as a negotiation tactic with Kilicdaroglu. Tahiroglu said Ince represents a confrontational approach to politics that has tired voters seeking less polarizing leaders after a slew of election cycles over the last six years.

“The decision to form a new party seems completely unnecessary in this political climate, particularly from the left bloc,” Tahiroglu told Al-Monitor.