Muharrem Ince, the main opposition candidate in Turkey’s presidential polls, has put up a performance beyond expectations, spurring hope in opposition ranks that defeating President Recep Tayyip Erdogan might be within reach. 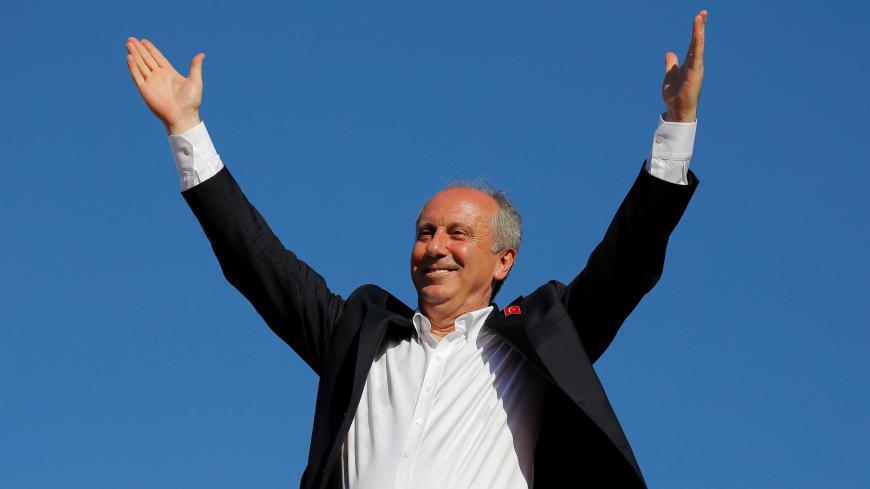 IZMIR, Turkey — Stabbing the air with his finger, Muharrem Ince strides along the roof of his campaign bus and tells a provincial crowd that the fortune President Recep Tayyip Erdogan spent on his new palace in Ankara could have built 100,000 houses.

“And now he’s building a summer palace of 300 rooms in Marmaris,” Ince adds, provoking a loud boo from the crowd in Kemalpasa, western Turkey.

Turkey has all the resources it needs, Ince says. “We’ve got the flour, the butter, the sugar, but we cannot make helva [a sweetmeat] because the chef is stealing the flour.” The people roar. They know who he means by “the chef.” And they are confident that Ince — the candidate of the main opposition Republican People’s Party (CHP), the torchbearer of secularism in Turkey — is the man to vote for to end Erdogan’s 15-year rule.

When the campaign for the June 24 polls began in mid-April, this cheerful former teacher was a middle-ranked politician who was forecast to place a distant third in the presidential race behind Erdogan and his popular female challenger, Meral Aksener.

But Ince seems to have overtaken Aksener. Polls indicate Ince will finish second to Erdogan and face him in a runoff July 8. Erdogan is paying Ince the compliment of focusing all his attacks on him.

Ince is not deterred. He often brings up Erdogan’s alleged corruption; when Erdogan derided him as a “poor fellow,” he said he preferred to be poor than of “dubious wealth.”

He has cultivated the support of the Kurds — a risky move in a political climate dominated by nationalist bluster. He went to see the Kurdish challenger, Selahattin Demirtas, in Edirne prison, where he is detained on charges of terrorism. He called on Erdogan to release Demirtas so “we can race like men.” And Ince said that if he were elected, he would initiate negotiations to solve the Kurdish problem between Kurdish and Turkish legislators in parliament.

These moves are clearly designed to win the Kurdish vote in a possible runoff. Nevertheless, in a country where right-wing politicians garner votes by attacking the Kurds, Ince stands out.

Moreover, he strikes a profile that challenges Erdogan’s narrative that the CHP — and secularists in general — are elitists detached from the people and averse to Islam. Hailing from a pious family in a village in the northwestern province of Yalova, the 54-year-old makes sure to mention he attended Quranic courses as a child, that he returns to his village on every Muslim holiday and that his family includes women wearing the Islamic headscarf. And while preaching science and nanotechnology to young people, the former physics teacher appears equally at ease in driving a tractor or wielding a scythe in farming fields.

He has represented Yalova in parliament since 2002, and ran against CHP leader Kemal Kilicdaroglu for the party leadership twice and lost. But when early elections were called, Kilicdaroglu stood aside and nominated Ince for the presidency.

If elected, Ince pledges to dismantle the authoritarian fortress that Erdogan has built. Ince would lift the state of emergency, imposed after the attempted coup of 2016, and restore the separation of powers. He would scrap the excessively powerful presidency that was narrowly approved last year in a referendum marred by widespread allegations of fraud and restore the parliamentary system.

He would abolish the Council of Higher Education, which Erdogan has used to fire academics for political reasons, and he would reform the Supreme Council of Judges and Prosecutors, whose rules and members Erdogan has changed to give himself control of the judiciary.

Last month, pro-government newspapers reported that Ince, as president, would seek to put Erdogan on trial. The stories seemed to be intended to whip up Erdogan loyalists against Ince.

Ince replied that his aim was to restore political neutrality to state institutions. He told Al-Monitor, “If [Erdogan’s] wealth is to be investigated, it must be by an independent judiciary.”

But can Ince win?

The playing field is not level. Most TV channels and newspapers are now owned by pro-Erdogan corporations. Ince’s campaign is under-reported.

The threat of fraud in the counting of votes is real. What was most disconcerting about last year’s referendum was that the Higher Electoral Board (YSK) made a last-minute decision to validate ballots unstamped by election officials and later refused to investigate the allegations of ballot stuffing. In March, amendments to election rules gave the YSK even greater control over ballot boxes.

To counter these hurdles, Ince is barnstorming the country. When Al-Monitor followed him for a day on May 27, he addressed five towns in Izmir province. He scoffed at the shortage of TV crews. He urged supporters to film him on their cell phones so they could circulate the speech on social media. Many people did.

He harped on the economy, which is the electorate’s top concern. Inflation is at 12.5%, unemployment is over 10% and the lira has fallen 25% against the dollar this year.

Ince pointed out that luxury yacht owners buy diesel fuel more cheaply than farmers. He was cheered when he promised to cut the price of diesel for farmers and raise the minimum wage by 38%.

Al-Monitor asked a woman in Kemalpasa what was the source of Ince’s appeal. “He talks with the voice of ordinary people. They understand him,” said Nese Celebi, an entrepreneur.

In the town of Odemis, high-school teacher Dursun Yuksel said he believed Ince could make good on his promises. “I’m fed up with Erdogan,” he said. “We’ve lost our freedom and the economy is ruined.”

The polls are divided on Ince’s chances of beating Erdogan in a runoff. One that says it is possible is Remres, a new polling company, whose May 6-9 survey found that Erdogan would score 41.8% to Ince's 41.3%, with 16.9% of respondents undecided or declining to answer.

A survey that indicates Erdogan would win was conducted May 11-17 by Metropoll, one of Turkey’s most reputable polling companies. Its director, Ozer Sencar, did not want to reveal precise figures, but he told Al-Monitor that Erdogan appeared on course to win in a runoff, with Erdogan's percentage in the high 40s and Ince's in the high 30s, excluding the undecided.

“The negative developments in the economy have not yet affected people to the extent that it would have an impact on the elections,” Sencar said.

Whichever poll turns out to be correct, Ince will have made his mark. After many years of electoral defeat, Turkey’s opposition has found a candidate who can play Erdogan at his own populist game. Ince may not win this time, but he seems to be a politician with a future.