Pompeo to visit Sudan, Bahrain, other countries on regional trip

Pompeo will discuss Israel and the transition to democracy in Sudan. Bahrain is also rumored to be next in line to normalize relations with Israel. 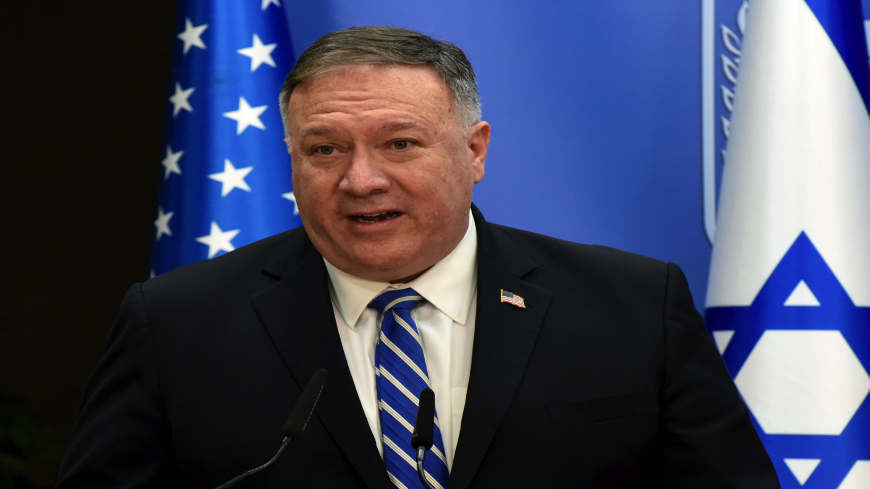 US Secretary of State Mike Pompeo speaks during a joint statement to the press with Israeli Prime Minister Benjamin Netanyahu (unseen) after meeting in Jerusalem, on Aug. 24, 2020. Pompeo arrived in Israel to kick off a five-day visit to the Middle East that will take him to Sudan, the United Arab Emirates and Bahrain, focusing on Israel's normalizing of ties with the UAE and pushing other Arab states to follow suit. - Photo by DEBBIE HILL/POOL/AFP via Getty Images

US Secretary of State Mike Pompeo began his Middle East tour on Monday. The top US diplomat first went to Israel and will next travel to Sudan, Bahrain and the United Arab Emirates (UAE).

In Israel, Pompeo met with Israeli Prime Minister Benjamin Netanyahu. They discussed Israel’s peace deal with the United Arab Emirates, US efforts to reimpose sanctions on Iran at the United Nations and Israel’s military superiority in the region.

"We talked a little bit about the challenge that the Chinese Communist Party presents to the entire world,” he said.

The United States publicly opposed a Chinese firm’s bid to build a massive water desalination plant in Israel. The company lost the bid in May.

The rest of Pompeo’s will trip will largely focus on continuing peace agreements between Israel and regional states. Prior to the UAE deal, only Jordan, Egypt, and Turkey  have diplomatic relations with Israel in the Middle East and North Africa.

In Sudan, Pompeo will discuss Sudan-Israel ties with Prime Minister Abdalla Hamdok, according to a State Department readout on his trip.

There was a diplomatic controversy in Sudan regarding Israel last week. Foreign Minister Haidar Badawi said the African country wanted peace with Israel, but he was then fired from his position.

Sudan has signaled a willingness to make peace with Israel before. In February, Sudanese Lt. Gen. Abdel Fattah al-Burhan reportedly met with Netanyahu.

Pompeo will meet with Burhan as well in Khartoum. In addition to Israel, Pompeo will discuss Sudan’s transitional government with the leaders. Longtime ruler of Sudan Omar al-Bashir was deposed in a coup last year, paving the way for a transition to democracy.

The United States is also involved in Sudan’s negotiations with Ethiopia and Egypt over Ethiopia’s Nile River dam.

The State Department did not specify what Pompeo will discuss with Bahrain’s Crown Prince Salman bin Hamad Al Khalifa. However, Israel’s intelligence head said last week that Bahrain and fellow Gulf kingdom Oman could be next to normalize relations with Israel.

The secretary will finish his trip in the UAE and speak about the Israel agreement with his Emirati counterparts, according to the State Department readout.