To pressure Palestinians and force them to back down from their decision to stop security coordination, Israel is refusing to recognize more than 24,000 Palestinian newborns while preventing their movement through crossings as well as their travel abroad. 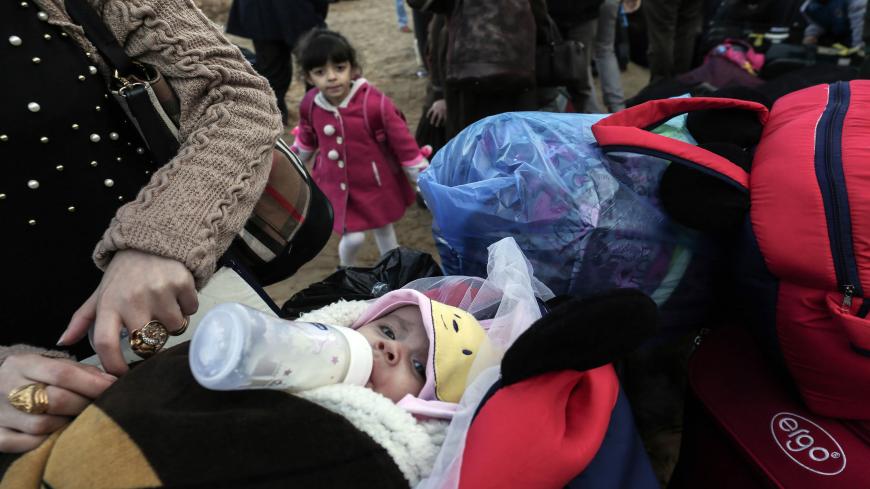 A picture shows a woman standing by an infant as they wait to ride a bus in Khan Yunis in the southern Gaza Strip, prior to departure for the Rafah border crossing with Egypt, Dec. 16, 2017. - SAID KHATIB/AFP via Getty Images

RAMALLAH, West Bank — After waiting for six months, Anwar Abdel Hakim, a Palestinian from the town of Mikhmas in the center of the West Bank, managed to obtain the identification papers and US-Palestinian passport for her son Mohammed to join her husband in the United States. They were supposed to travel Aug. 9.

However, Hakim did not know that upon arrival at the Karama border crossing to Jordan, the Israelis would ban her newborn Mohammed from traveling. His ID number was not in the Israeli records because it was not transferred from the Palestinian Authority (PA).

This is the case for thousands of Palestinian newborns who were born after the PA announced in May it would halt security coordination with Israel because of the Israeli annexation plan.

In normal times, the PA would regularly transfer the records of newborns and the names of those who renewed their passports to the Israeli authorities, which control the border crossings and security permits in Israel.

A year ago, Hakim married a relative of hers residing in the US state of New Jersey. Following the wedding ceremony, her husband traveled to the United States to complete his wife's residency and travel permits, but this coincided with the spread of the coronavirus and the closure of crossings. She repeatedly tried to travel while pregnant with her son, but she ended up giving birth to him in Ramallah in June.

She got on the list of flights approved by the Palestinain Foreign Ministry, in coordination with the Jordanian and Israeli sides, on Aug. 9.

Hakim told Al-Monitor, “We obtained a US passport for Mohammed based on the registration papers we obtained from the Palestinian Ministry of Interior, and we thought that was enough, but the Israeli side did not allow us to pass.”

Hakim believes she will always have a problem even if the two sides reach a solution. The second flight to the United States is not until Aug. 24, and her US residency permit will have expired by then. In other words, she will have to make arrangements for another trip.

Like Mohammed, there are thousands of babies that to this day have not been recognized by Israel after Palestinian President Mahmoud Abbas announced in May that he wants to halt security coordination with Israel. This prevented hundreds of these babies from traveling with their families to their areas of residence despite full coordination with the Jordanian authorities.

According to figures Al-Monitor obtained from the General Authority for Civil Affairs, 24,279 Palestinian babies — 13,567 in the West Bank and 10,712 in the Gaza Strip — were born between May 20 and Aug. 9 and remain unrecognized by Israel.

Haya Shebaru was not able to join her husband in the United Arab Emirates despite the Palestinian Ministry of Foreign Affairs coordinating her travel through Jordan twice. Israel does not recognize her daughter Alia.

Shebaru, a Palestinian from the city of Nablus in the northern West Bank, came to the West Bank to give birth in March, and after her daughter Alia arrived in April and was registered with the Palestinian Ministry of Interior, she tried to travel. However, the crossings and airports were closed due to the coronavirus pandemic. With the start of coordination to evacuate those stranded in the West Bank, she was part of one of the first groups — except she could not travel July 22.

Speaking to Al-Monitor, Shebaru appealed to everyone who could intervene to solve her problem and reunite her and her four-month-old baby with her husband. “My daughter has not met her father yet, and we will lose our residency in the UAE if the situation continues," she said.

The Palestinian Ministry of Interior says it is doing all the required work related to registering newborns in its records and issuing the official papers, but such records are no longer transferred to the Israeli side as was the case before the security coordination was halted.

Undersecretary of the Interior Ministry Youssef Harb told Al-Monitor that these unilateral measures are taken by Israel to manipulate the fate of these children in order to pressure the Palestinian political leadership into backtracking on its decision to stop the security coordination.

He said, “The papers issued by the Palestinian Ministry of Interior — such as birth certificates and official passports in the name of the State of Palestine — are recognized by the whole world.”

According to Harb, such Israeli measures violate international agreements that allow Palestinians to enter and exit through crossings.

The question arises as to the options that the PA has to solve this problem, which could affect the lives of thousands of newborns and their families. The problem is not only that Israel is not recognizing newborns, but that it is not recognizing IDs that are issued to those who have reached the age of 16, or whoever needs a new passport.

Ahmed al-Deek, political adviser to the Minister of Foreign Affairs and Expatriates, who is following up on this issue, told Al-Monitor that the Israeli position is a racist measure that violates human rights principles and the duties of the occupying state to facilitate the movement of the population.

He added, “If the crossings are opened, we will face a bigger problem with students who want to travel abroad and who have new passports, or with any Palestinian whose passport expired and has been renewed.”