An open-ended staff strike at the Interior Ministry in Jerusalem has left Palestinian residents unable to access critical documents. 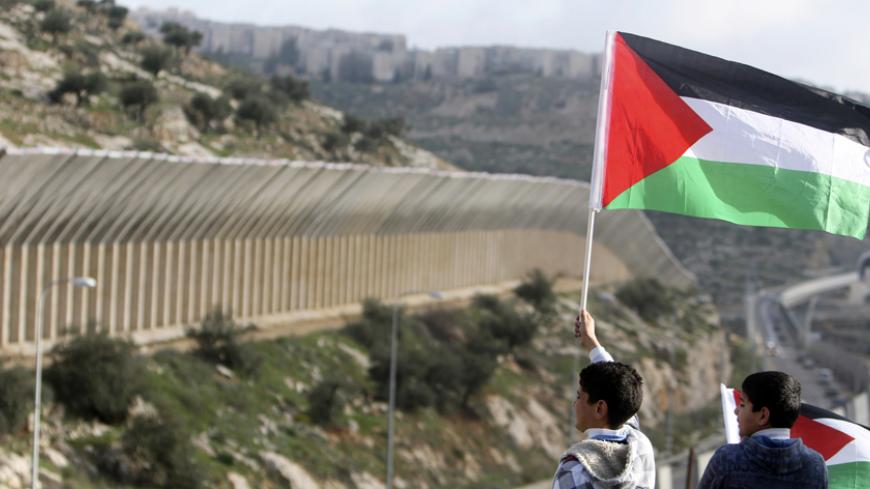 Palestinian youths hold Palestinian flags during a demonstration against the construction of a section of the controversial Israeli barrier in the West Bank town of Beit Jala near Bethlehem, March 4, 2010. - REUTERS/Ammar Awad

Yasmine was born in July 2014 at Jerusalem’s Hadassah Medical Center. Six months later, she has yet to get a birth certificate from the Israeli authorities. While her mother Tamara was born and has lived all her life in East Jerusalem, young Yasmine’s sin is that her father hails from the nearby West Bank city of Beit Jala.

Shortly after Yasmine's birth, Tamara took her daughter and all the necessary documents — the rental agreement for her Jerusalem home, utility bills and her blue ID card proving that Jerusalem is her place of residence — to the small office of the Israeli Ministry of Interior in East Jerusalem’s Wadi al-Joz neighborhood and waited in a long line.

After reviewing her papers, the Israeli clerk asked for yet another document, an affidavit signed in the presence of a lawyer vouching that Tamara actually lives in the home for which she provided a valid rental agreement. Months earlier, Israeli social security officials had visited her at the very same home to see she lived at that address before approving what every Israeli citizen and resident is entitled to: free medical care including hospital coverage for delivering a baby.

Tamara was given an appointment date for mid-February 2015, because the small office dealing with all East Jerusalemites had more cases than it could handle. On Feb. 16, Tamara arrived at the Ministry of Interior, armed with the required affidavit, only to find the office closed. The ministry's staff had decided to go on strike indefinitely, causing major havoc and disruptions to the lives of the more than 300,000 Palestinians living in East Jerusalem.

Not only are Jerusalemites unable to process essential documents such as birth certificates, they are also unable to renew their travel documents, obtain ID cards and get other necessary documents. Stateless East Jerusalemites are given a two-year laissez-passer passport that allows them to travel abroad. The strike also prevents Jerusalem’s Palestinians from traveling to Jordan. An Israeli exit permit is issued at the King Hussein (Allenby) Bridge crossing by the Interior Ministry, and without this permit, which guarantees the right of Jerusalemites to return, Jordan refuses to allow Palestinian Jerusalemites in.

The strike of the Israeli Interior Ministry staff in East Jerusalem has received absolutely no press coverage. Neither the Israeli press nor the Palestinian media has paid the topic any attention. Busmati, a Bethlehem-based news website, used strong words to criticize the Palestinian media and politicians. “Shame on You,” read the headline of a news story that berated the media and politicians. “Israel puts a lot of pressure on Jerusalemites with the aim of making their lives difficult. They try to revoke their residency, demolish their homes, charge them exuberant taxes and place many of them under house arrest, and now our media is joining in.” The article called on the media to take the moral, national and human responsibility to point their cameras at Jerusalem: “As to politicians and the government, you seem to have given up on 300,000 Palestinians in Jerusalem, unless the capital has changed to the city with its Manara Square [Ramallah]."

The Israeli press is no better. Not a single report or news story appears in any of the Israeli media outlets, despite Israel’s consistent claims that the "united" Jerusalem is its eternal capital.

The Israeli-built wall and administrative restrictions have created a huge gap between Palestinians in Jerusalem and the rest of the occupied territories, adding to the struggles of a population that already faces many challenges. Since 1967, Israel has conducted an administrative campaign to reduce the city’s Arab population. Israeli human rights organizations have documented that more than 14,000 Jerusalem residents have lost their residency through these measures. The Association for Civil Rights in Israel submitted to the United Nations a detailed report about the problems facing Jerusalemites because of the wall and as a result of the disproportionate use of force against Palestinians in the city.

While the media and Palestinian politicians were focused on the troubles of Al-Aqsa Mosque in the past months, protesting attempts by Jewish zealots to lay claim on the Islamic site, an entire population was left leaderless and without any way to address their daily grievances. Both the Israeli and Palestinian governments are preoccupied with their own problems, and as a result have left 300,000 Palestinians political orphans.

There is no doubt that the case of East Jerusalem is an important element in any future peace agreement. But the total lack of interest and attention to the people of the city sends a clear message that politicians are simply paying lip service to the city for political and nationalistic reasons, without any interest in the lives of those who live in it.

When people such as Yasmine's family have to jump through all kinds of hoops and wait for months simply to get a birth certificate, just because they are Palestinian Jerusalemites, something is terribly wrong with the system. After 47 years of illegal military occupation and unilateral annexation, the time has come to provide Palestinians in Jerusalem and elsewhere their basic human right of national self-determination in an independent state of their own.