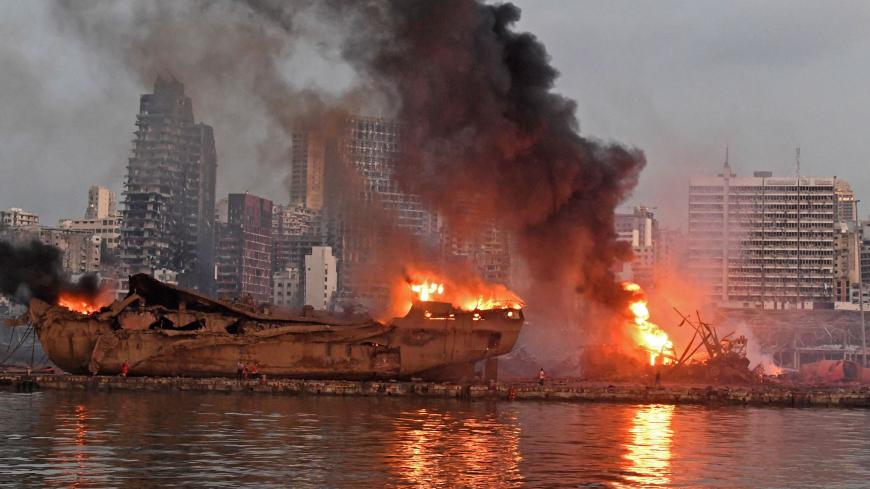 A ship is pictured engulfed in flames at the port of Beirut following a massive explosion that hit the heart of the Lebanese capital on Aug. 4, 2020. - AFP via Getty Images

Lebanese President Michel Aoun said Tuesday’s catastrophic explosion could have been the result of “foreign interference.”

On Aug. 4, a massive explosion ripped through Beirut, killing more than 150 and injuring thousands. The blast destroyed much of Beirut's port and the surrounding neighborhoods. It was so big that it damaged buildings several miles outside of the city. Investigations so far have concluded that 2,700 tons of ammonium nitrate, a fertilizer, caught fire and then exploded. Many in Lebanon are livid at the government for its apparent negligence in storing the highly explosive material so close to the country’s major population center.

Aoun said that the government would determine who was responsible and that no one is immune to investigation in remarks reported by Lebanese media outlets on Friday.

Lebanon has requested satellite images from France to help with its investigation, according to Aoun. French President Emmanuel Macron visited Beirut yesterday and locals chanted anti-Lebanese government slogans at him.

Tuesday’s devastating blast has prompted numerous conspiracy theories. Prominent Al Jazeera journalist Ahmed Mansour shared a video on Twitter that showed an apparent flying object in the vicinity of the explosion, although some on twitter claimed it could be a fake.

Some social media users quickly attributed the incident to an Israeli attack, which Israel immediately denied. Israel is often the culprit in conspiracies theories in the Arab world. Israel has also offered to assist Lebanon, a notable development considering the two countries lack formal relations. Israel is in a state of conflict with the Lebanese military and political organization Hezbollah.

Some critics of Hezbollah have claimed the explosive material belonged to the Iran-backed group.

Aoun is not the only leader to suggest the incident may have been an attack. US President Donald Trump made a similar claim but was subsequently  contradicted by Pentagon officials.