Prime Minister Hassan Diab said he and his cabinet were stepping down in response to popular demands, saying "the system of corruption is bigger than the state." 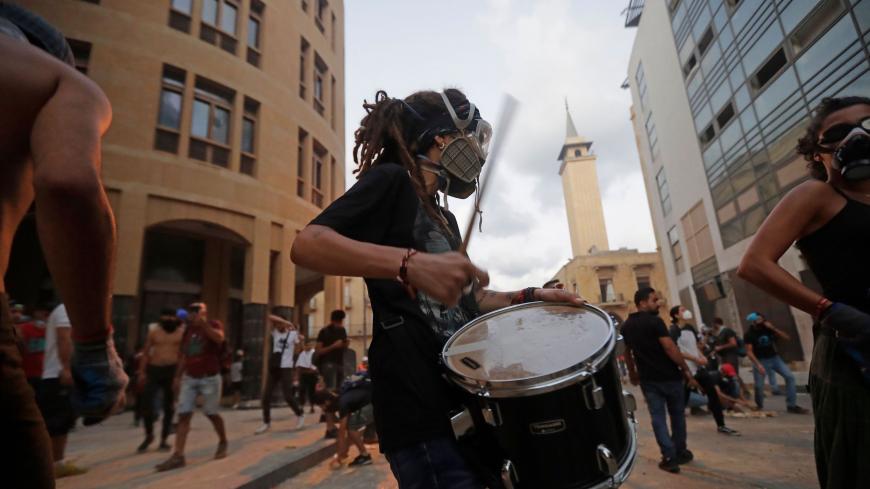 A Lebanese protester beats a drum amid clashes with security forces near an access street to the parliament in central Beirut on Aug. 9, 2020, following a deadly explosion that turned the city into a disaster zone. - JOSEPH EID/AFP via Getty Images

Lebanon’s government resigned today following last week’s deadly explosion and subsequent mass protests. The country’s political future is in question as it continues to face an economic crisis and the fallout from the tragic blast.

Lebanese Prime Minister Hassan Diab announced the resignation in a speech televised by Lebanese news outlets. He said the decision was in response to popular demands.

“We have carried the Lebanese demand of change,” said Diab. “But between us and change are very thick walls.”

The resignation of the whole cabinet, of which the prime minister is head, follows the departures of several individual ministers over the last few days. Before Diab’s announcement, Justice Minister Marie-Claude Najm resigned. On Sunday, Information Minister Manal Abdul Samad and Environment Minister Demianos Qattar left their posts. Finance Minister Ghazi Wazni also reportedly prepared his resignation before Diab addressed the nation. Many members of parliament have also left office.

There were several resignations even before the explosion from officials fed up with the government’s handling of the financial crisis.

Diab cited corruption as a reason the government had to step down.

“The system of corruption is bigger than the state,” he said.

Lebanon has a parliamentary system of government in which leadership positions are divided among the main religious communities in the country. The president, a Christian, is head of state; the prime minister, a Sunni Muslim, is head of the government; and the Speaker of the Parliament is a Shiite Muslim.

In the aftermath of the explosion, Diab said he would call for early parliamentary elections. The next elections are slated for 2022. Amid increasingly heated protests and public demand, Diab then resigned on Monday.

According to the constitution, the president should call now for consultations with parliament during which the parliamentary blocs would come up with a list of candidates to serve as prime minister. Members of parliament then need to agree on one individual. It is unclear what will happen this time given several parliamentary resignations and demands from protesters for early parliamentary elections. The last parliament was voted into office in 2018, which was before the recent protests.

The explosion occurred in Beirut on Aug. 4 in the capital city’s port. Investigations so far point to 2,700 tons of the fertilizer ammonium nitrate blowing up after being improperly stored. Lebanese President Michel Aoun has suggested “foreign interference” is possible, though there is no conclusive evidence of such a thing at present. A government-led investigation is underway. The blast destroyed much of the port area and damaged buildings up to several miles outside of Beirut. More than 200 people have been confirmed killed so far with thousands more wounded and others still missing.

Many Lebanese blame the government for the explosion and protesters have been out en masse since last week.

There have been anti-government protests in Lebanon since October against corruption, poor services and the deteriorating economic situation in the country. Things have not improved since then. The currency’s value has plummeted and job losses have gone up due to COVID-19 and the accompanying lockdowns. Electricity cuts, long a problem, are also worsening and parts of Beirut are without power for several hours a day.

The coronavirus situation is also worsening amid the fallout from the blast and renewed demonstrations. Lebanon registered a record 294 new COVID-19 cases on Sunday.