The lawyer for the Teachers Syndicate recently told Al-Monitor the government used virus-related laws to silence the group, which is critical of the economic situation in Jordan. 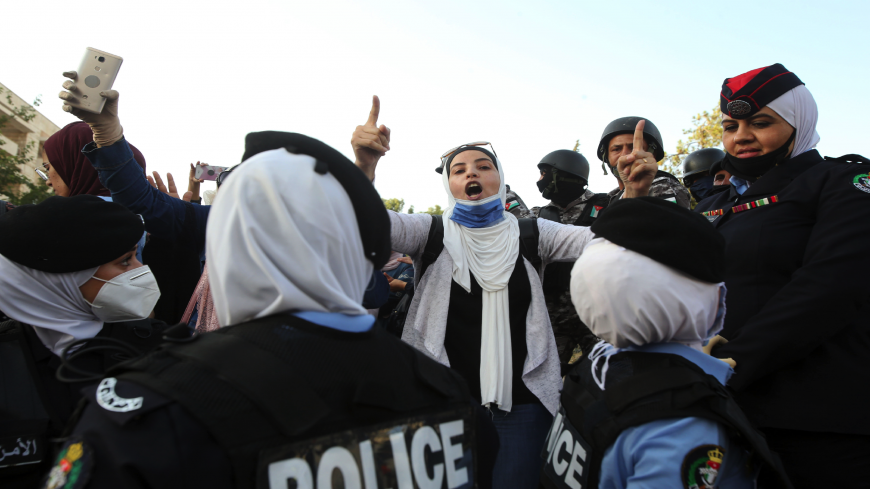 Jordanian police close the streets reaching to the area of the prime minister's office, known as the 4th circle, on July 29, 2020, in Amman, Jordan. Government security forces had arrested top members of the Jordan Teachers Syndicate, an opposition-run union that became a force for political dissent.

Members of Jordan’s Teachers Syndicate have been released from government detention following an outcry. Many criticized the crackdown on the large labor union, saying it stifled expression regarding the poor economic situation in Jordan following harsh anti-coronavirus measures.

The Jordanian government closed the syndicate on July 25. The group has 140,000 members, making it the largest labor union in Jordan. The government also detained its leadership council and more than 1,000 protesters who demonstrated against the decision, the syndicate’s lawyer, Bassem Frehat, told Al-Monitor.

The state cited in its decision defense laws granted in March at the height of the response to the COVID-19 pandemic when Jordan was under strict lockdown. In his interview with Al-Monitor, Frehat accused the state of using the laws “selectively to restrict the protests." The government may have singled them out due to some teachers being part of the Muslim Brotherhood political organization or to stave off a potential strike over a canceled wage increase.

Amman received criticism for the decision. In a statement, the United Nations called the move a “serious violation of the rights to freedom of association and expression."

Jordan also instituted a gag order on the media, preventing it from covering the issue. Al-Ghad, a large independent media outlet in the Hashemite Kingdom, did not publish an article on the teachers’ release. The state-controlled Jordan Times likewise did not report on the topic.

Jordan instituted an around-the-clock lockdown in March to mitigate the spread of the coronavirus. Most businesses were forced to close. As a result, Jordan has had only 1,639 confirmed COVID-19 cases to date among its nearly 10 million population.

On the other hand, the economic effects were severe. Most businesses reopened by June, but many Jordanians were dismayed that the government used the defense laws to allow employers to greatly reduce wages.