What are vice presidential nominee Kamala Harris' views on the Middle East?

Joe Biden's running mate has views on Iran, Israel, Saudi Arabia and Syria that fall in line with the Democratic party establishment. 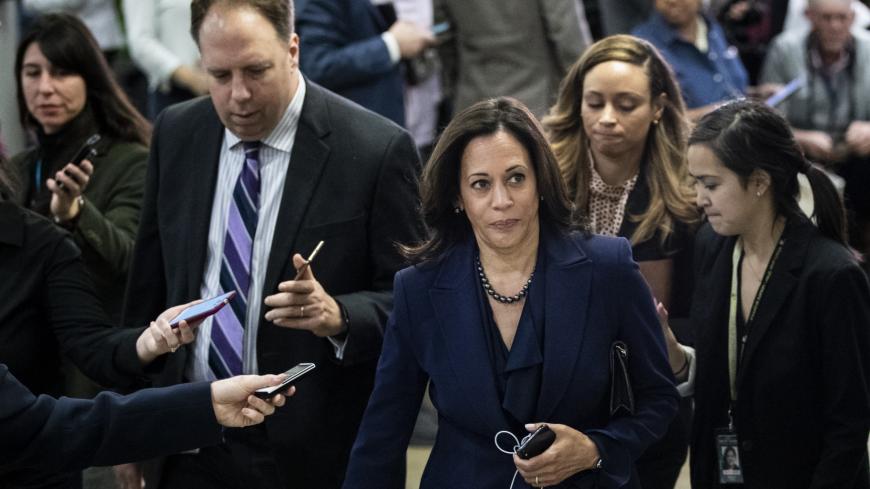 Sen. Kamala Harris leaves a briefing with administration officials about the situation with Iran at the US Capitol on Jan. 8, 2020 in Washington. The meeting came after Iranian forces launched more than a dozen ballistic missiles against two military bases in Iraq, which followed the Jan. 3 US killing of Iranian Maj. Gen. Qasem Soleimani in Baghdad. - Drew Angerer/Getty Images

US Democratic Party presidential nominee Joe Biden chose California Sen. Kamala Harris as his running mate today. In her time in the Senate, Harris has taken positions on the Middle East that line up with Biden’s and the Democratic establishment.

On Iran, a spokesman for Harris told Al-Monitor last year that she would rejoin the 2015 Iran nuclear deal if elected president. (She dropped out of the presidential race in December). US President Barack Obama, under whom Biden served as vice president, negotiated the deal aimed at ending Iran’s pursuit of a nuclear weapon diplomatically. Trump withdrew the United States from the agreement in 2018 and reimposed harsh sanctions on the Islamic Republic.

Harris has also voted against US military sales to Saudi Arabia and opposes the Gulf country’s war on Iran-backed forces in Yemen.

In June, she urged US President Donald Trump to oppose Israeli annexation of Palestinian territory in the West Bank.

These views resemble those of Biden. As vice president, Biden was involved in negotiating the Iran deal that Harris wants to return to. Biden supports the US-Israel relationship, but has also called for the United States to restore aid to the Palestinian Authority that Trump ended. In a November debate, he vowed to stop military sales to Saudi Arabia over the death of Washington Post columnist Jamal Khashoggi.