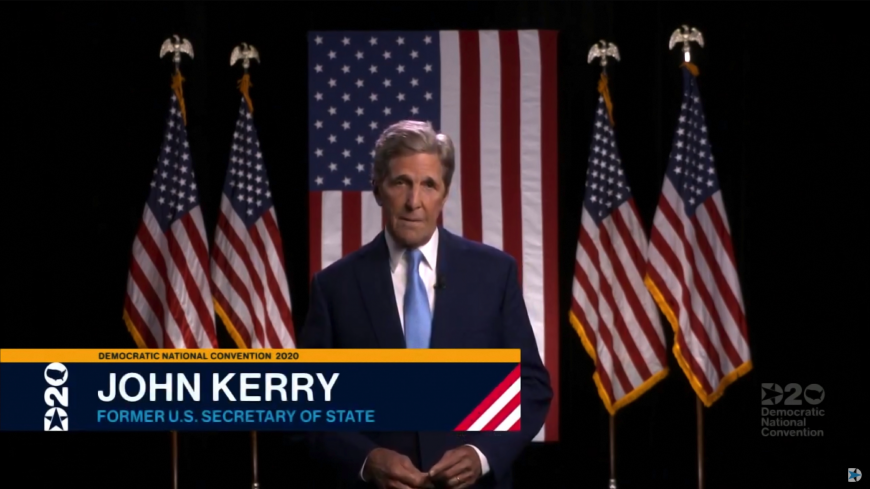 In this screenshot from the 2020 Democratic National Convention livestream, former US Secretary of State John Kerry addresses the virtual convention on Aug. 18, 2020. The convention, which was once expected to draw 50,000 people to Milwaukee, Wisconsin, is now taking place virtually due to the coronavirus pandemic. - Photo by Handout/DNCC via Getty Images)

Iran and Israel came up on day two of the Democratic National Convention on Tuesday night, as former Vice President Joe Biden accepted the party’s nomination to run for president.

John Kerry, who served as secretary of state in the Obama administration, touted the Iran nuclear deal in his speech on Tuesday.

“We eliminated the threat of an Iran with a nuclear weapon,” said Kerry to open his remarks at the convention.

The United States signed the Joint Comprehensive Plan of Action as it is known in 2015 along with Iran, Russia, China and the European Union. It removed sanctions on Iran in exchange for Iranian compliance regarding its nuclear program and was a major foreign policy achievement for the administration.

US President Donald Trump removed the United States from the deal in 2018, however, and put harsh sanctions on the Islamic Republic back into place. The United States says Iran is still trying to build a nuclear weapon, which Iran denies.

Kerry has continued to defend the deal since leaving office, and Biden supports rejoining the agreement if certain conditions are met.

The Israeli-Palestinian conflict was also part of the discussion regarding the speakers at the convention. On Tuesday, activist Linda Sarsour spoke briefly and called for unity among Democrats. Sarsour is a pro-Palestine activist who supports boycott movements against Israel. Her harsh criticisms of Israel have led conservative and pro-Israel groups to label her as anti-Semitic, which happened again shortly after her speech on Tuesday night.

The Democratic Party is divided between its large pro-Israel camp and some newer politicians who are more supportive of the Palestinians. Many critics of Israel, including Minnesota Rep. Ilhan Omar, entered Congress in 2019. Several of this year’s Democratic primary elections featured debates on Israel. Longtime chair of the House Foreign Affairs Committee Eliot Engel lost to the pro-Palestine progressive Jamaal Bowman in his New York primary this year.

The Democratic National Convention has otherwise focused on domestic issues, but Iran and Israel in particular are election hot buttons this year. At a rally on Monday, hours before the convention kicked off, Trump said the United States moved its Israel embassy to Jerusalem “for the evangelicals,” referring to Christian voters who strongly support Israel.