The drone incident comes as the Israeli military braces for retaliation from Lebanese militant group Hezbollah along its northern border. 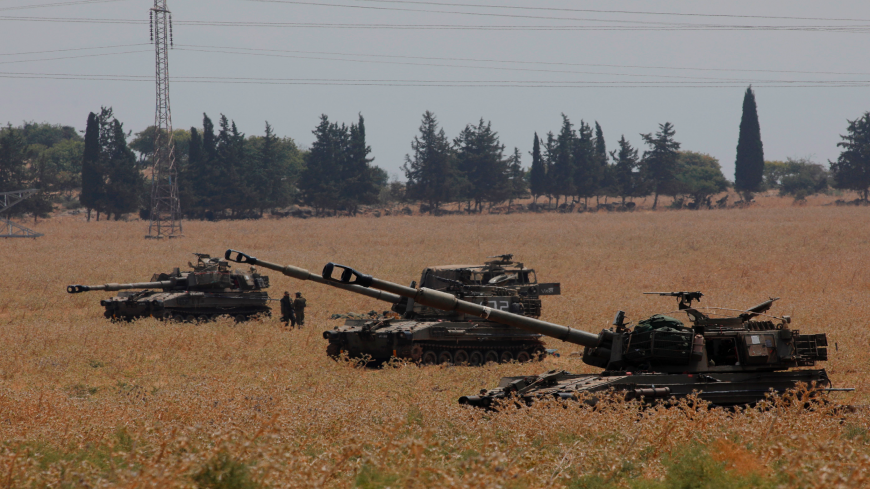 155 mm self-propelled howitzers are deployed in the Upper Galilee in northern Israel on the border with Lebanon on July 27, 2020. - JALAA MAREY/AFP via Getty Images

Amid heightened tensions with Lebanon’s Hezbollah, Israel’s military says it shot down a small drone that crossed into Israeli airspace overnight in the Golan Heights.

“Last night, [Israel Defense Forces] troops identified, monitored, & downed a drone which infiltrated into northern Israel along the Blue Line. We are searching the area,” the IDF said on Twitter today, referring to the United Nations-recognized border between Israel and Lebanon.

“The IDF continues to maintain a high level of readiness to defend Israel's northern border from any threat.”

Earlier in the day Thursday, a false alarm prompted air raid sirens near the border with Lebanon in northern Israel.

The Israeli military is bracing for reprisals from the Lebanese militant group Hezbollah, which said it would avenge an airstrike near Damascus that killed one of its senior operatives July 20. Following the strike, which has been widely attributed to Israel, the IDF sent additional firepower to its northern border

On July 26, Israel says a Hezbollah cell attempted to cross into its territory, but fled back across the border when the Israeli military fired on the group. The Iran-backed Shiite organization denied the ambush took place.

On Sunday, the military said it thwarted a plot to place bombs along Israel’s border with Syria. Grainy video released by the IDF appears to show an airstrike taking out four militants near the steel security barricade in the Golan Heights.

The following night, Israel fired on a number of targets belonging to the Syrian military, including observation posts, anti-aircraft artillery facilities and command and control systems, the IDF said. Israel said it holds the Syrian government, which has recruited Hezbollah and Iranian militias to fight in its civil war, responsible for any attacks aimed at Israel from its soil.

IDF Chief of Staff Aviv Kohavi said the Israeli army would stay on high alert along the Israel-Lebanon border, The Times of Israel reported, despite suggestions that Hezbollah might hold off on cross-border attacks in light of the deadly blast in Beirut.

Thousands are injured and at least 154 dead following the explosion in Lebanon’s capital earlier this week. Israel, which is still technically at war with its neighbor to the north, offered humanitarian assistance through diplomatic channels.