The Iraqi government is under pressure to reveal the fate of persons unaccounted for and those detained in secret prisons. 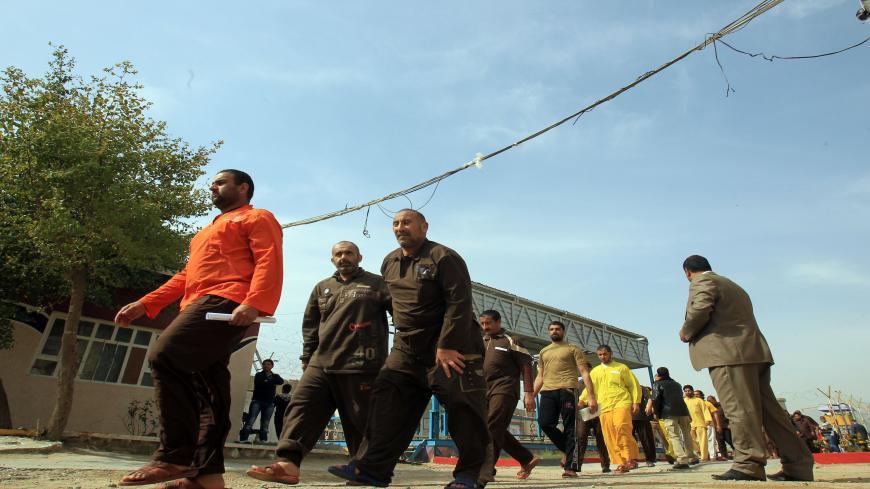 Iraqi detainees leave prison after being freed in the capital Baghdad, in an apparent bid to placate protesters in Sunni areas of the country, Iraq, Feb. 28, 2013. - ALI AL-SAADI/AFP via Getty Images

Romeo, a Christian, tweeted, “I want back my brother Abdel Massih. My brother is in a secret prison.” According to his fellow activists, the riot police arrested Romeo and transferred him to a prison at al-Muthanna airport in Baghdad.

On July 30, Kadhimi made a surprise visit to al-Muthanna prison, which is located in a large camp housing Iraqi forces in northern Baghdad.

No prime minister was expected to visit the prisons, especially al-Muthanna, which imprisons protesters who have been taking to the streets since October 2019.

But Kadhimi is showing Iraqis a different look in trying to be responsive to calls for reform by protesters.

Kadhimi spoke to dozens of prisoners, asking them whether or not they are there because they exercised their freedom of expression, requesting the opening of prison records and looking for those detained for freedom of opinion and expression.

Anas al-Azzawi, member of the Office of the Iraqi High Commission for Human Rights, told Al-Monitor, "Kadhimi’s visit is part of his government program to promote human rights and affirm his commitment to fulfill the promises he made to demonstrators and reveal the fate of the disappeared protesters. Hence, this flash visit consists of a confirmation of moral and legal commitment.”

He said, “The commissioner’s field monitoring reports indicate that many detainees among the protesters were not registered in the official records — especially in Baghdad.”

Azzawi added, “We are waiting for other surprise visits to be made by Kadhimi to prisons that do not fall under the security services’ control. That would engender more confidence in the promises he made and his willingness to reveal the fate of those disappeared and kidnapped — not only those among the protesters.”

Kadhimi’s visit came amid human rights organizations and civilians’ demands that the fate of those who went missing and are thought to be detained in secret prisons be revealed. These organizations believe that the visit is a mere media stunt that leads nowhere.

In the same vein, Kadhimi’s move was not welcomed by parliamentarians. Mohammed al-Karbouli, member of parliament for Anbar, criticized Kadhimi’s visit and said it was just for show. He called on him to reveal the fate of the years-long detainees and the disappeared.

Jurists in Iraq have focused on the secret prisons dossier, although raising it is dangerous. They believe that a number of missing demonstrators are present there. Activists in the Iraqi protests told Al-Monitor that “at least 11 protesters have disappeared and are believed to be in al-Muthanna prison or in secret prisons.”

None of the Iraqi governments since 2003 has acknowledged the existence of secret prisons, whether governamental, run-by pro-government groups or operated outside its framework.

On Aug. 4, parliamentarian Laith al-Dulaimi gave a testimony on his detention in a secret prison in 2012, when he served as member of the Baghdad Provincial Council.

Speaking to Al-Monitor, Donatella Rovera, senior crisis response adviser at Amnesty International, said, “Such brief visits that the officials make do not substitute for the needed type of investigation that shall determine the fate and whereabouts of thousands of people who disappeared after getting arrested by the Iraqi security forces and armed militias in the past years.”

She added, “The disappearances are not limited to the protests but also include the previous years. Thus, the right investigation [to identify] the disappeared detainees need to be conducted in any possible detention place — including the secret detention centers that are under the armed militias’ control or the so-called Popular Mobilization Units in the various parts of Iraq.”

Belkis Wille, senior researcher with the conflict and crisis division at Human Rights Watch, told Al-Monitor, “Al-Muthanna prison is a notorious prison complex where many armed groups have their different prisons. Most of the people I know and who have relatives who have disappeared are suspected to be in al-Muthanna. Thus, it makes sense that he [Kadhimi] goes there.”

The Iraqi prisons dossier has been unresolvable by the succeeding governments, particularly in regard to the unlisted prisoners in official records and those who have not been brought before a judge although months and even years have passed ever since they were arrested. Today, the coronavirus pandemic has added another problem, portending serious consequences.

Human rights reports indicate that there are more than 60,000 prisoners in Iraq, including 1,000 women, in 13 large detention facilities. The information Al-Monitor obtained shows that Iraq’s prisons are seemingly overcrowded, accommodating three times their capacity, which drives diseases and the spread of the coronavirus.

Kadhimi, who was a human rights activist before serving as director of the Iraqi National Intelligence Service in 2016 and as prime minister, is facing the major challenge of the secret prisons dossier he inherited from previous governments.

Improving prison conditions is no easy task. On the one hand, there is a health crisis due to the coronavirus outbreak and prison conidtions are poor.  There are detainees who are not listed in official records andpolitical opponents of Kadhimi who would prefer he stay away from this file.