The newspaper had just published an interview that accused the government of covering up the scale of Iran's coronavirus outbreak. 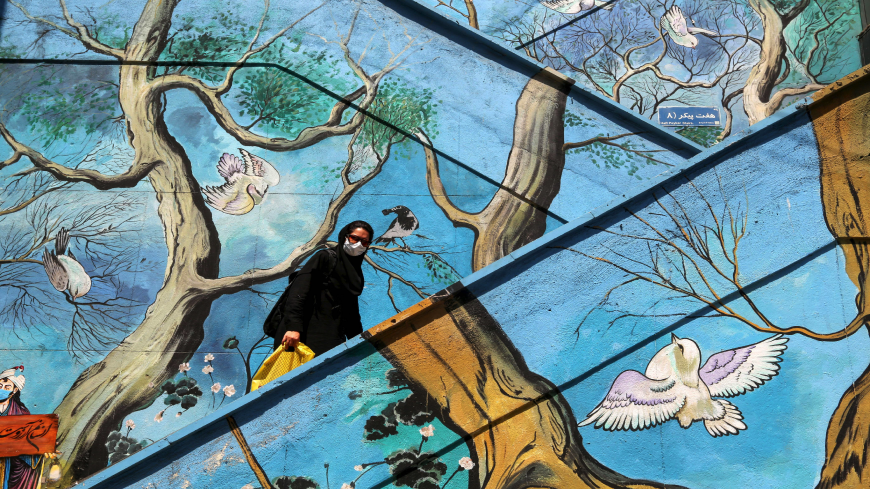 An Iranian woman wearing a protective mask due to the COVID-19 pandemic climbs up a decorated stairway in the capital Tehran, on July 14, 2020. - Photo by ATTA KENARE/AFP via Getty Images

Iran has shut down a Tehran-based business daily after it quoted an epidemiologist critical of the government’s handling of the pandemic, state news agency IRNA reported.

The economic daily Jahan-e Sanat published on Sunday an interview with a member of the country’s national coronavirus task force who accused the government of covering up the scale of the outbreak. Mohammadreza Mahboubfar told the paper the number of coronavirus case counts could be 20 times higher than reported.

“There was no transparent flow of information,” Mahboubfar said, according to Reuters. “The government only provided engineered figures … over concerns about [its impact] on the election and the commemorations of the revolution anniversary.”

“This latest move to target a newspaper for reporting on COVID-19 is an irresponsible act in the face of the biggest public health crisis of our time,” said CPJ Middle East and North Africa representative Ignacio Miguel Delgado.

“The closure of Jahan-e Sanat is an unfortunate continuation of Iran’s long practice of suppressing information to the detriment of the Iranian people’s well-being,” he said.

Iran is one of the most oppressive countries for journalists, according to Reporters Without Borders, which ranked the Islamic Republic 173rd out of 180 countries in its yearly press freedom index.

The newspaper’s closure comes as experts have cast doubt on Iran’s official coronavirus figures. As of Monday, the Health Ministry has confirmed more than 328,000 cases and 18,616 deaths.

Amid what the Health Ministry described as an “alarming” spread in cases, Deputy Health Minister Iraj Harirchi acknowledged last month that the death toll is likely much higher than has been officially reported.